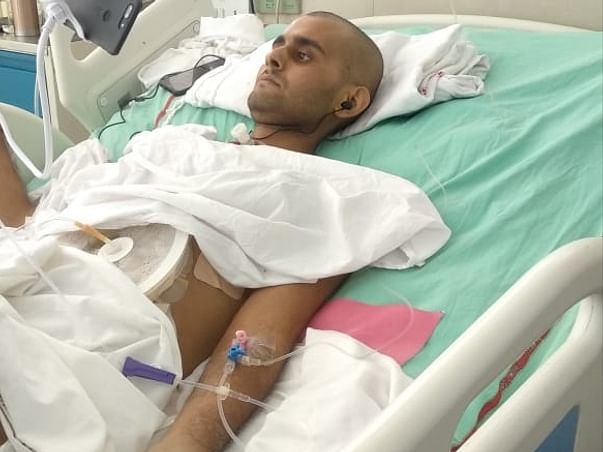 Share
Subject: Financial help for a patient who was critically injured due to an accident. Intestine transplant needed to survive.

Mayank Kamboj, 23 years old, was critically injured in an accident on 22nd September 2019 in New Delhi. The Police were informed by someone who helped the patient and admitted him in Trauma center, AIIMS. Doctors attended the patient well and all necessary steps have been taken till now to try and make sure he is better. After spending around 28 days in ICU, Mayank has been to TC-6 ward of the same hospital.
With the best treatment by doctors that was necessary at that time, entire small gut starting from jejunum to proximal half of transverse colon (SMA territory) was devitalized with multiple mesenteric tears and extensive hemorrhage from the retroperitonum. Entire devitalized gut was resected out stapled D3 and proximal transverse colon brought out as mucous fistua.

As all small intestine gut had to be removed, Mayank needs an Intestine transplant. Currently in India, only Medanta has been able to perform a successful Intestine transplant till now. So we know we are in the right hands. However, Medanta doctors have suggested that Mayank needs to recover with all ups and downs his body is facing. Because of his condition, he needs to be on TPN (Total parenteral nutrition) till his body is ready to undergo the Intestine Transplant. If by God’s grace, Mayank is able to fight till then, we would want to proceed with the transplant. The cost of intestine transplant in India and other countries is very high (rough estimate for this case is around 1CR INR). Mayank’s family is not that economically strong. They won’t be able to bare the high expenses by themselves. Mayank being the only son in the family, is loved dearly by all and the family wants to do everything they can to get him back on his feet. Any help will go a long way for the cause.

Donate
0%
Be the first one to donate
Need Rs.20,000
Card, Netbanking, Cheque pickups
Or Donate using