Robert Swan’s “Leadership on the Edge”

2041 was founded by polar explorer, environmental leader and public speaker Robert Swan, OBE, the first person in history to walk to both the North and South Poles.

Swan has dedicated his life to the preservation of Antarctica by the promotion of recycling, renewable energy and sustainability to combat the effects of climate change. He has removed 1,500 tons of rubbish from the Antarctic, has reached out to over 35,000 African youth and has taken over 550 young people, teachers and corporate heads on his Antarctic journeys.

The mission is to build personal leadership skills among people who choose to embrace the challenge of sustaining all forms of life – in their families, communities, organizations and the planet.

The vision for 2041 is to have committed youth leaders, emerginf from every corner of society and working together to create a sustainable world.

Human activities in Antarctica are governed by an international agreement known as the Antarctic Treaty System, established in 1959. This unique international agreement ensures that Antarctica is used for peaceful purposes only and that the environment is protected. Currently there is a moratorium in place that bans drilling or mining in Antarctica called the Environmental Protocol, established in 1991. This document can be reviewed after the 50‐year anniversary in 2041. As the year 2041 quickly approaches, Robert’s goal is to ensure that the young people of today make informed and sustainable decisions for tomorrow.

2041 led the first corporate expedition to Antarctica in 2003, in which 42 people from 18 nations joined Robert on his ‘Leadership on the Edge’ program. Since then, over 400 corporate leaders,educators, students and entrepreneurs from around the world have experienced Antarctica with the 2041 team.

The International Antarctic Expedition 2016 will take a team of carefully selected people from around the world to visit this fragile region. The purpose of the expedition is to groom ambassadors for education, the environment and sustainability across the globe. 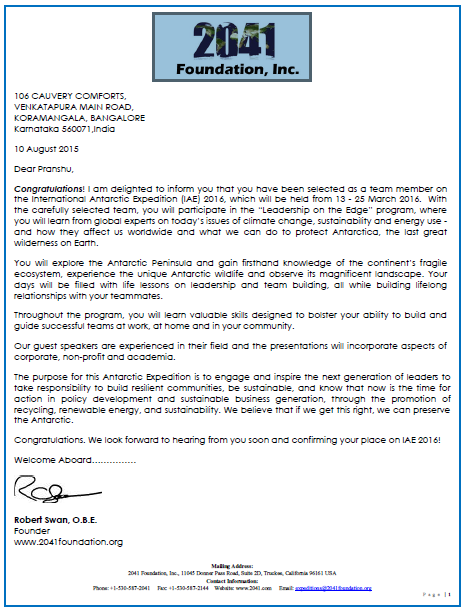 My name is Pranshu Sharma. And my mission is to save Antarctica.
I Know. It sounds like a pretty big undertaking. Perhaps a bit misguided, Or maybe even maniacally delusional that i would even attempt to  take on correctig the course of Antarctica . But well as they say "A journey of thousand miles starts with a single step", So here is a bit of background about me.

Presently working as an Analyst in Goldman Sachs Bangalore.

INITIATIVES
CABAMIGO
(www.cabamigo.com)
Co-founder of an online platform to create awareness towards cabpooling in Bangalore. A social initiative to connect people going to the same destination and save the city from Traffic and pollution while saving the gas and money of the users.

COMMUNITY EXPERIENCE
Currently I am an active member of CUPA( Companion unlimited plus action )-a public charitable trust that works for the welfare of all animals. Work in protecting the interest and welfare of animals, wild and domestic and create compassion for both stray and pet animals. 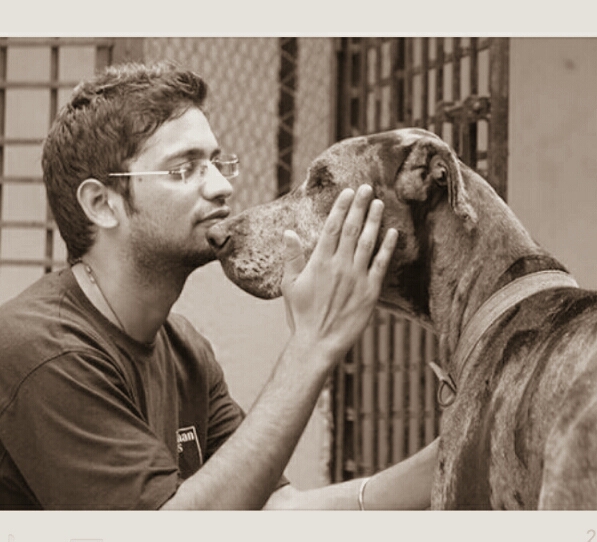 In the past two years of my association with Goldman Sachs and its endeavor on giving back to society via Community Team Works programs, I was an active member in the following projects:-

A unique volunteering activity to create community based creative innovation support system to meet the physical, medical, emotional, economic and social requirements of elders. Hands on experience of  Leading a group of 40 volunteers and 50 Elders for outing activity outside the trust campus to give them the feeling of freedom and supporting there emotional needs.

Managed a group of 36 Volunteers in helping the AkshyaPatra Staff in moving,washing,cutting vegetables and then serving the prepared food at Govt. High School Kanakpura Road.


3) Worked with CRY(Child Rights And You) for helping underprivileged children in Bangalore.
(http://www.cry.org/what-to-do/act-locally/bengaluru.html)

Worked as a Volunteer in painting the lutheran church trust school working for the underprivileged children.

MISSED HONOURS
1) Only have 2 years left to get into amazing 25 under 25.
2) Have yet to finish a book i started writing an year ago.
3) My Short Documentary didn't get past the third round of College Movie Direction Competition.


WHY IAE?
As they say be the change you want to see in the world. Will hopefully learn and network enough to come back and start giving back to the society by creating online platforms, Social Groups and institutions to raise the awareness towards our nature and sharing my the experience to build up a better new generation which can raise above the personal greed and can pass on our nature in its alluring form to the coming generations.

Robert Swan and 2041 have invited me and a few other young people across several nations to be part of the International Atlantic Expedition 2016 and sensitize people to the threats of climate change. These people, including myself, are expected to raise our own funds to make the expedition possible. The money raised will be used to cover my expedition fees, travel, Antarctic safety equipment and any other cost that I may incur to mobilize the masses. I believe this expedition will help me to groom, shape and define my future role as a global climate change player.

The money raised will be used to cover my expedition fees, travel, Antarctic safety equipment and any other cost that I may incur to mobilize the masses. I believe this expedition will help me to groom, shape and define my future role as a global climate change player.

1. Why should I support an individual for the International Antarctic Expedition 2016  ?

- This reminds me of Robert Swan's words, "The greatest threat to our planet is the belief that someone else will save it."

The entire globe is being affected by Global Warming and numerous studies have indicated the devastating effects of the melting of glaciers. Research shows that if this region were to melt the ocean levels would rise by 200 meters which could lead to the death of millions of people across the world.

Whatever affects us here affects the entire globe and also Antarctica - the last great wilderness on earth.

I would be one among the sixty young people across several nations who would be groomed to become leaders who can embrace all forms of life thereby creating a sutainable environment.

2. What activities will you carry out post this expedition ?
- I would be grateful to individuals who contribute towards making this dream come true. I will be participating in promotional activities for organizations which sponsor me both pre and post the expedition in order to create awareness within the community on the threats to climate change and the disasters it can bring upon the entire planet.
I am presently contacting NGOs, brands and businesses which are committed to combating global warming and towards building a sustainabale environment.

3. What is in it for the organizations which sponsor your expedition ?
- The sponsors would have their insignias featured on either my expedition attire or their flags which I would carry and would be prominently featured during the flag day for all sponsors during the course of the expedition.
- I would also be participating in some of their promotional activities prior to and post the expedition.