Help Srijita For Cancer Treatment At CMC Vellore. | Milaap
This is a supporting campaign. Contributions made to this campaign will go towards the main campaign.
This campaign has stopped and can no longer accept donations. 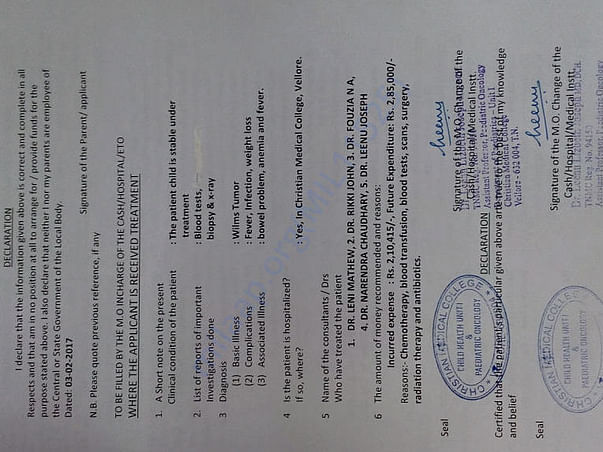 Srijita Modak, a six years old girl child from Kolkata who is having Wilms tumor in her right kidney, now under treatment in CMC Vellore. She has been struggling for her life each and every day in CMC.I, Kousik Biswas, maternal uncle of Srijita narrator of this case.It started on 23rd Dec, 2016 with her bitter abdominal pain when she was at home. Her parents consulted with one child specialist, S K pal, MBBS on the next day. That doctor had prescribed some pain killers and acidity medicines as per his first observation.
But she sustained the pain. On the next visit, the doctor prescribed some different medicines for pains. But still, the pain did not get relieved. On the third visit, it was on 3rd Jan, 2017 doctor asked her parents to do Ultra sonography.
So they followed and did the same on 5th Jan,2017. I personally saw that report and it narrated as "A large heterogeneous sol is seen arising from the upper pole of the right kidney"
Her parents consulted with another doctor named Tapan Kumar Jana, Paediatric on 5th Jan with the ultrasonography report. Then the doctor advised them to do whole abdominal CT scan and FNAC.
On 6th Jan 2017 we, her parents and me visited NRS hospital and contacted the pediatric department and consulted with a pediatric surgeon, I really forgot the name of the doctor. He also narrated the issue with drawing on the prescription that she is having a tumor in her right kidney and recommended a whole abdomen CT scan. Meanwhile, the situation of the child was worsening with bitter abdominal pain. We frightened and did not waste time. We directly visited Suraksha Diagnostic, VIP on that day itself for CT scan. They had some formalities and did some blood tests and we were told to come on the next day morning.
On 7th Jan 2017, CT scan was done at around 12:20 pm and we were asked to come at around 5 pm to collect the report as it was urgent.
In the evening at around 7:30 pm we visited at
Phoenix Hospital Diagnostic Centre PVT LTD, 2no Airport gate ... with CT scan report and consulted with a Doctor named Amit Ray, a Paediatric surgeon at SSKM hospital, way that Kolkata. He had a look on the report and the films and narrated the problem away that the tumor was drastically growing everyday and it is very emergency to operate. He also mentioned there may be high risk and we did not get any assurance from him. He also told it may take few days to arrange everything.
We really got afraid and started crying. We did not waste time and took immediately decision to take her CMC, Vellore.
Because we all wanted an immediate care of her.
On the next day, it was 8th Jan,2017 we reached there at CMC around 3 pm. We directly entered into pediatric emergency department without any prior appointment. I narrated the entire problem to the consulted doctor, I remember name It was Grace madam and she took admission her immediately and did all kind of blood tests. On that day evening, she was shifted to Q6 south ward (general) and was kept her under observation.
Next day,9th Jan  2017 Biopsy was done and she was there until 10th Jan morning. Then She got discharged on 10th Jan at around 11:50 am and we were told to get an appointment on 12th Jan  2017 with any Oncology Doctor. We got an appointment with Fouzia madam on that day but we got a consultation with Dr. Leni grace Mathew, Professor, department of Oncology.
Dr. Leni narrated the problem after going through all the reports and biopsy report as  "It is a Wilms tumor, typically occurs in children. The treatment option is as below
Chemotherapy then Surgery and the again chemotherapy and at last radiation if requires.
She explained about the stages of Wilms tumor as
If it is stage one then >95% chances of curable.
If it is stage 2 or stage 3 and stage 4 then the chances of cure will be less.  Then I asked about our patient's tumor stage, then she told me that it has not been identified yet and we can figure it out after surgery. She also told me that she will talk with radiology doctors to get some more information. Then she told us to do some tests like CT thorax and stage marker and also told to get an appointment on 17th Jan 2017".
On 16th Jan night it was bitterly paining her abdomen and she could not sleep on that entire night. In the next day morning, we reached the hospital at around 6:30 am and got entered into the chamber at around 10 am. Dr. Leni did not say more, she only told us to get admitted her in Q5 east.
Since 17th Jan she is admitted.
After taking admission doctors identified a lot of issues in her.
After giving the first chemo she started getting the lot of difficulties like Fever, vomiting, allergy, Nausea, decrease platelets count, hair loss, weakness etc.After three days she started taking oxygen through a normal cannula.On the next day, on 23rd Jan she was having breathing difficulty, after giving her maximum oxygen(up to 15 lbs) she was not able to maintain the saturation percentage properly.Then she was shifted to PHDU on that day. On that day doctors identified that her right lung got filled with fluids and that is why she was not breathing properly.Then doctors did pulmonary test to get out the fluids from the lung.
On that day evening, doctors decided to move her PICU and give her oxygen through optic flow.After getting relief from severe breathing problem she shifted to PDHU on 29th Jan.From 29th Jan to 10th Feb she was there in PHDU. Then she is now in Q5 East general ward.

On the first counseling on 18th Jan, with doctors and consultants, we were told that the entire treatment cost will be five lakhs and the cost is likely to be more if there are any unseen complications.We already spent 3.5 lakhs within 34 days because of that severity.The father of that child has pawned his assets and borrowed heavily from relatives.
So, therefore, I, on behalf of ourselves and for the child, am keeping hope to get your support financially. Please extend your support so that we can continue her Treatment and get her back alive.
Kousik Biswas.
Declaration 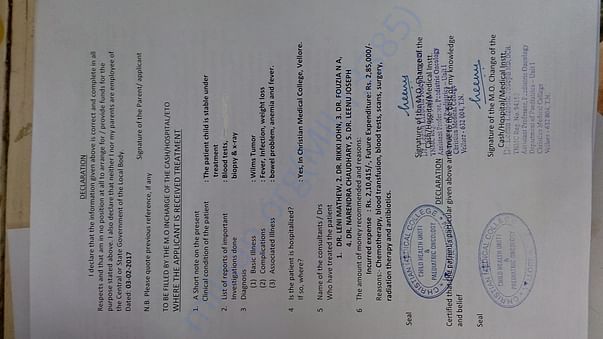 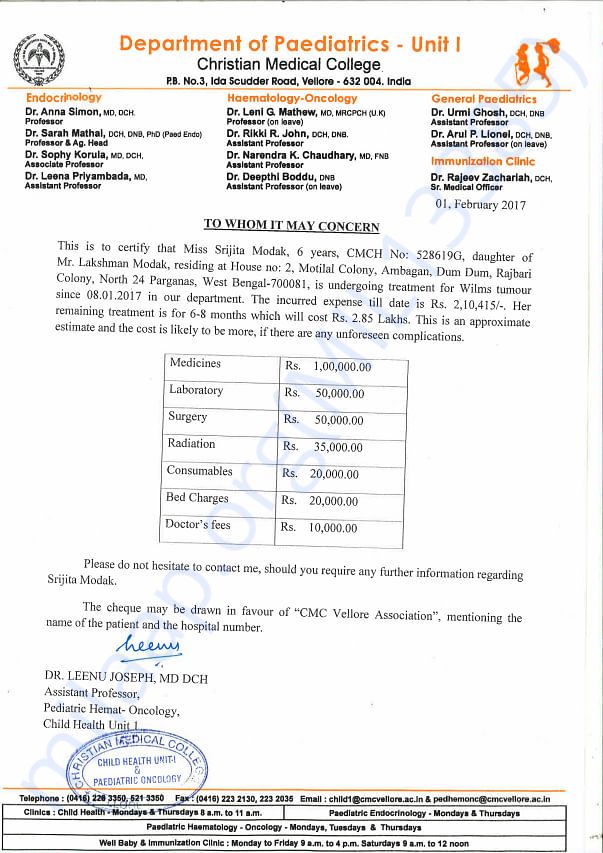 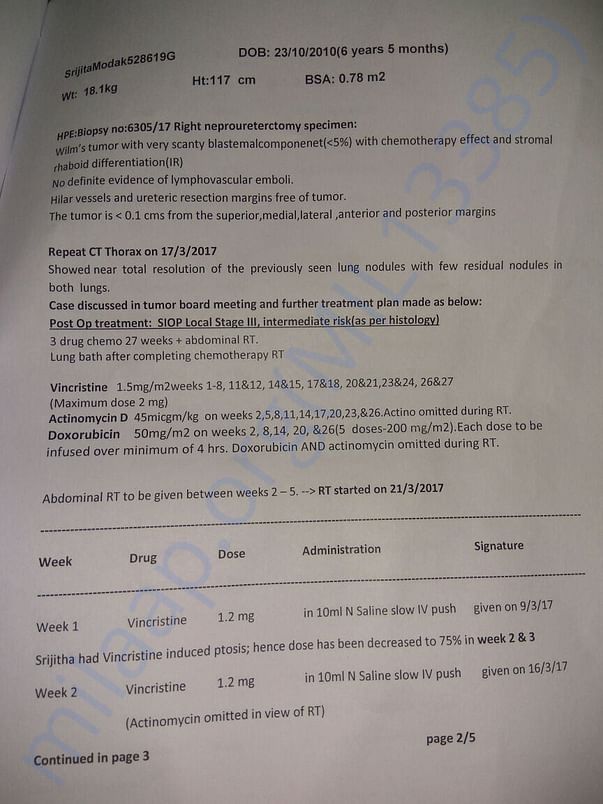 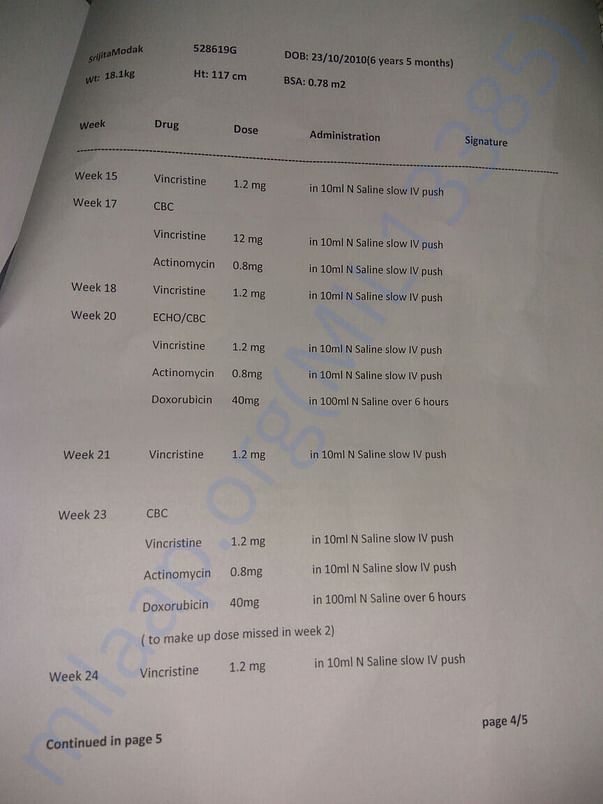 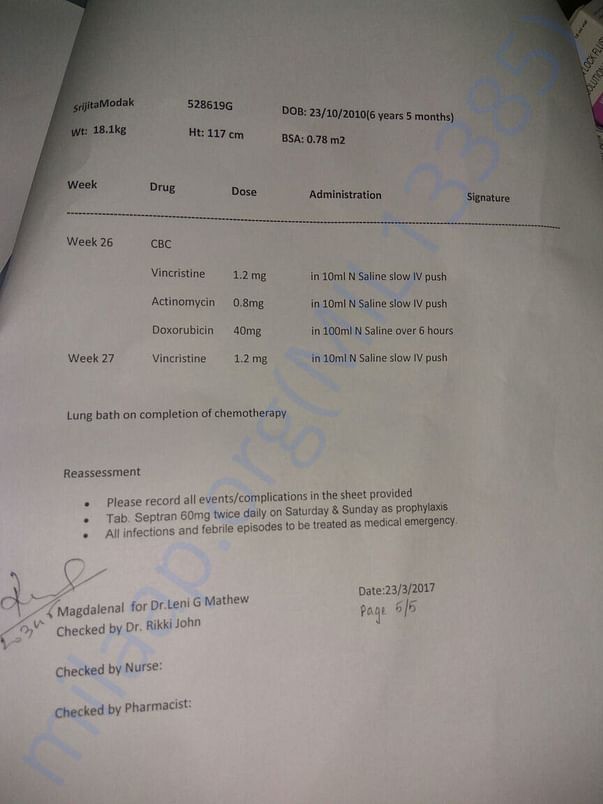 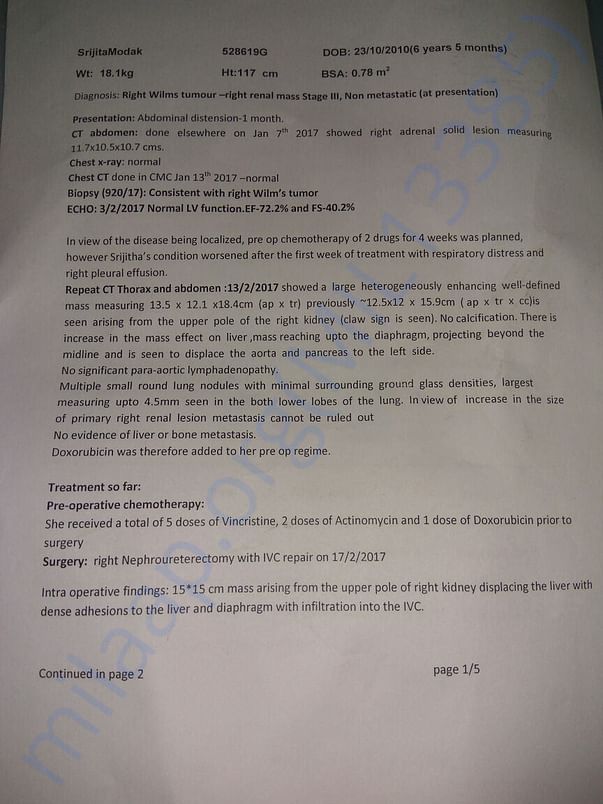 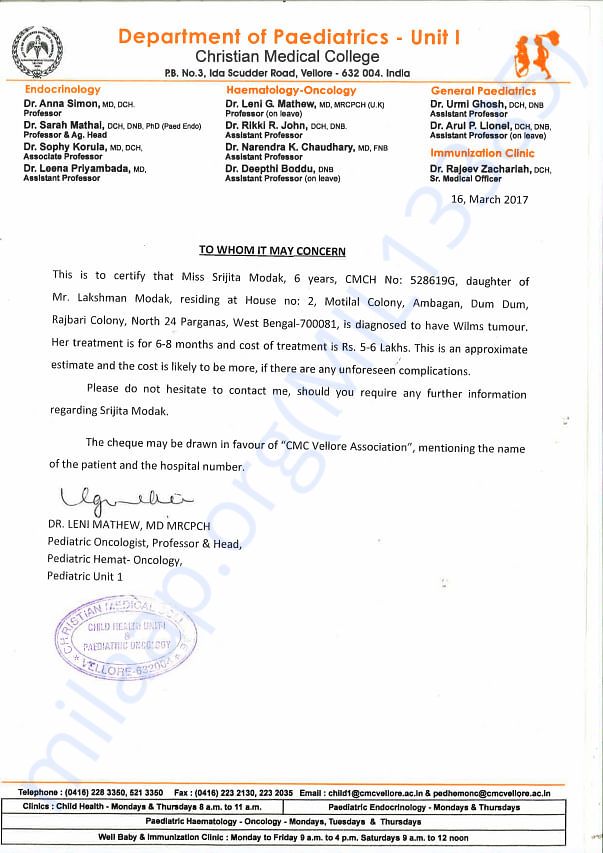 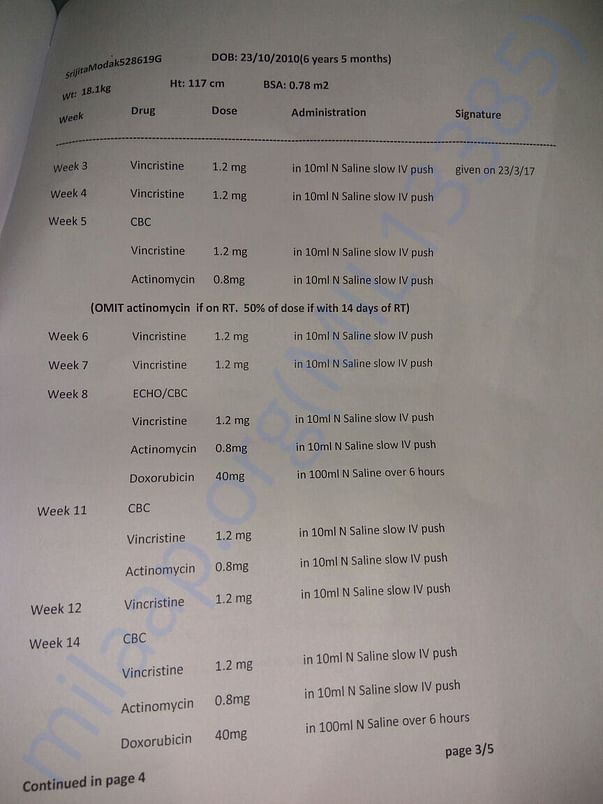 Thank you so much for the wonderful messages of support and your donations. Srijita is now doing well. There are only three chemotherapy sessions left and which can be finished expectedly by mid of September. After that radiologist will plan for radiation (lung bath). Hopefully, the treatment will get over by October 2017.

Thank you once again from the bottom of my heart. Please keep blessings her.
Dear Supporter,

This is a heartiest gratitude to each and everyone for your kind cooperation towards Srijita's treatment. She is doing well now.
She needs a lengthy treatment still.

By god's grace she is doing well now. She is better now. She has to take chemotherapy till mid of September,2017 weekly once basis. Today she has an appointment with Dr Leni. I will update accordingly once it is finished. Thank you for your support and constant prayer.

Donated to this campaign via Paytm? Click here if you can’t find your donation listed below.
M
Madhu donated Rs.1,000

Donated to this campaign via Paytm? Click here if you can’t find your donation listed below.
M
Madhu donated Rs.1,000

A
You are sending a message to
Renu
Go back 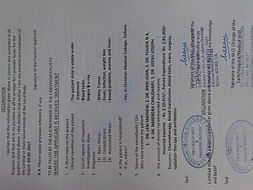