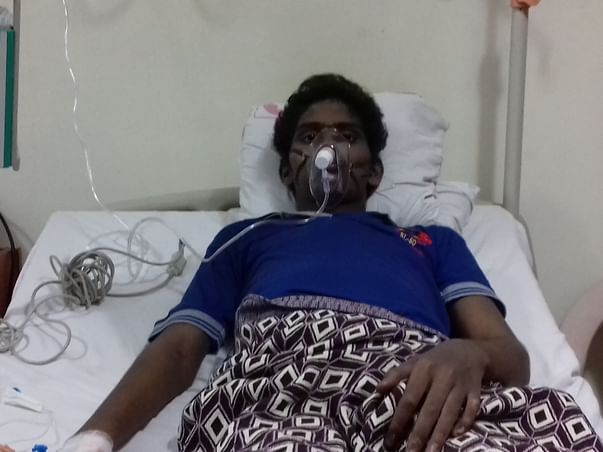 Mukilan is 19 years old. He has been sick for most of his life but for the first time, he has given up and feels like he is taking his last breaths. His body has stopped making blood. While he managed with medication for 9 years, his condition was getting worse, suddenly landing him in the ICU struggling to stay alive. Mukilan needs a bone marrow transplant to live the rest of his life.

“When Mukilan was 10, he had a high fever. It lasted for weeks and regardless of the medicines it did not subside. Blood tests failed to tell us what was wrong, so we went to Coimbatore to figure out. A bone marrow test told us he had Aplastic Anaemia.
His Father Murugan took Mukilan to Vellore. The doctor said he needs surgery. The family could not afford it at the time. They shuttled through several hospitals and decided to go for homoeopathy. For 9 years, Mukilan’s haemoglobin level was under control.

“It did not rise or fall. It was steady. He began going to school. He was looking forward to finishing B.com and become a CA. He used to go on his own bike. He was getting stronger.”
Now he is dying and we cannot afford the surgery that can help him survive.
Suddenly, things turned upside down. One day, Mukilan became extremely weak and fainted. His haemoglobin level dropped to 1.5. He had to be admitted to the hospital. Even now his condition is serious. The doctor has given the family only one option – the boy needs a bone marrow transplant as soon as possible.

“My son is scared. All these days he thought he was getting better. Now, he lost hope. For the first time, he Googled the disease and saw that the Web said there was no cure. He says, ‘Don’t lie to me Appa. I know I’m dying. I know it is all coming to an end. I am scared.’”
Help save Mukilan’s life
Murugan is heartbroken to see his son in this state. The once chubby and cheerful kid has become frail and weak. As a father, he thinks he has failed, unable to save either of his children from the same disease. He is a car painter earning Rs. 550/day on days he has a gig.

“We already spent Rs. 4 lakhs on diagnosis, and now a few more lakhs on treatment. For the surgery, we need Rs. 12 lakhs and I have nowhere to go to arrange this kind of money. I could not save my daughter. I want to save my son.”
Your support can help Murugan save at least one of his children.