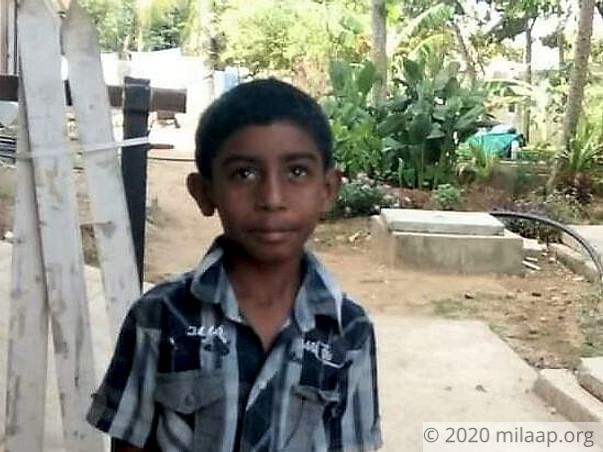 8-year-old Karuppasamy is a cheerful and kind boy. He is in his 2nd grade and likes to go to school. Unfortunately, he is not able to be regular to school. He has been diagnosed with a severe heart disease. Karuppasamy has become too weak, he often struggles to breathe. Only a surgery can help him live a normal life.

Karuppasamy has heart disease and needs surgery at the earliest

Kauppasamy lives with his mother Irulayi and his little brother Saravanan (5). His father left them when he was three years old and he never returned back. She is raising the two children single-handedly. She works day and night to give them a good life.

Last year, Karuppasamy told his mother about a medical camp at the school. The parents were invited and this little boy was excited about the event not knowing that it would change his life completely. Irulayi went there casually but the doctors in the camp confirmed that he has a heart disease and needs a surgery at the earliest to survive. Irulayi was completely shattered. She held him tight and cried aloud. Doctors consoled her that it can be cured but she was scared of the painful journey ahead.

Karuppasamy has become too weak and tired

"He has breathing trouble but he'll be fine in some time. I never thought this would turn this critical. I couldn't afford to take him to a hospital. I feel guilty, I have only my children, I can't let him go. I'm willing to do anything to save his life." - Irulayi

Karuppasamy's health has deteriorated in the last few months. He has become very weak. He catches a cold frequently. He hardly goes out for play, even a few minutes of walk to school leads to breathing troubles. He cries to his mother. He is too young to know about his condition.

Karuppasamy's father left him 3 years back

Irulayi and her children can have the next meal only if she goes to work. Not working a day would mean that she has to starve. When her husband left her, no one came to support her. In fact, no one believed that she can manage to raise two children all alone. Irulayi proved everyone she is a strong woman, she worked hard and provided the basic needs of her children. Despite the poverty, they were a happy family.

"I have endured so much of pain in my life but I survived all that for my children. I was hopeful of bringing them as successful and happy children. Now I can't bear that my son's life is at risk. I can't imagine a life without him. I should somehow save him." - Irulayi

Irulayi is a daily wage worker

Irulayi is a daily wage worker. She leaves in the morning after preparing food for the children. She comes in the evening. Until she comes, children are in neighbor's house. She skips meals to feed her children well. She cannot even imagine paying for the treatment but she is already running out of time.

Irulayi earns Rs 150 per day with which she has to feed her two children. She requires Rs 2 lakhs for the surgery. She has gone through so much of pain in her life and is now struggling to save her son's life. Let poverty not be the reason to lose his life.

Your support can help Karuppasamy to have surgery and live a normal life. 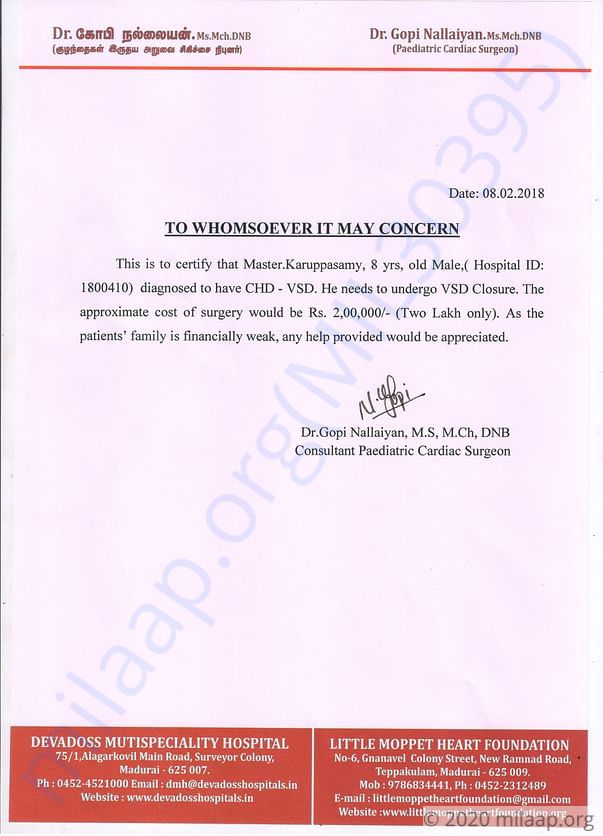 Happy to inform a good news with you all. Karuppasamy underwent surgery. and he is fine now. His mother is happy to see him. She wanted to Thank you all for your support and prayers.
Thankyou all.

Donate
Report fundraiser
See how thousands are crowdfunding for their causes on Milaap
Rs.143,538 raised

May God bless you and help you recover soon !

May God bless you and help you recover soon ! 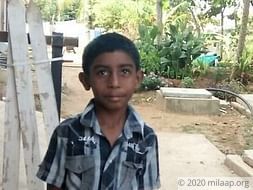