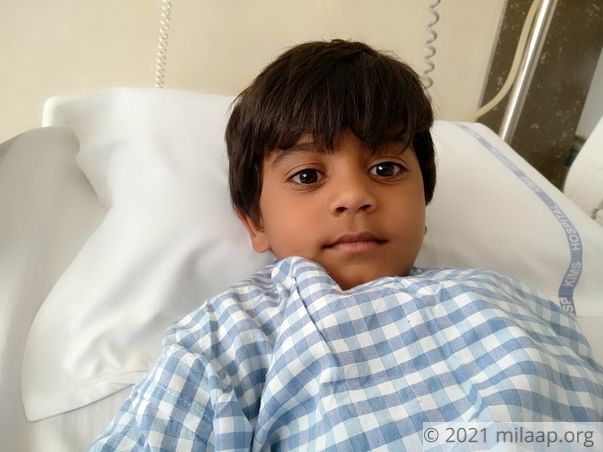 “We have spent the last five years in constant fear. Sending him to school or even out to play – how would we get to him if something happened?” explains Jagadeesh's father Raju.

Jagadeesh was diagnosed with two holes in his heart just two days after his birth. His parents were asked to wait for a few years to see if the holes closed on their own. Jagadeesh is now 5-years-old and is starting to understand that what scares his father more than anything else is the sickness in his chest.

Heart disease has cast a shadow on a happy child

To watch their child in pain is not easy for any parent. Raju and his wife Renuka have lived for years with the fact that their child may become fatally sick any time. The holes in Jagadeesh's heart mean that they need to pump blood with more force – flooding his lungs with blood often causing deadly infections.


“Jagadeesh is too young to ask us why he can't run or play like the others. He only knows that he needs to sleep more than his friends and they no longer play when he is awake. He knows that there is a problem in his chest because I keep checking the sound of his erratic heartbeat,” explains Raju.

Jagadeesh just started school last year and but not before his parents went and met all his teachers and explained his condition to them. They begged them to make sure he doesn't run a lot. At school, he is very quiet – talking only to the girl who sits next to him. At home, he often runs to his parents crying at night because his heart is beating painfully.


Jagadeesh is close to his older sister Rajasudha

Raju has made sure that Jagadeesh gets regular checkups and takes his medicines. But he has now hit a wall. Jagadeesh is finally ready for surgery, but he has no savings, or any resources left to fund the surgery. His modest job in Madanapalle, Andhra Pradesh is barely enough to even make ends meet.


“Even to take him to the hospital and get a checkup, I have to borrow from more than three people. I work in a small company and what I earn is gone paying for rent, our rice and his medicines. We are not eligible for government support or even for loans because we have no savings,” Raju says.

The years of tests, medicines and precautions have left his parents too financially exhausted to finally save Jagadeesh. It is only a matter of time before his heart condition becomes worse. His parents are waiting for the day they no longer fear for his life.

Your contribution will finally bring happiness into this family's lives.