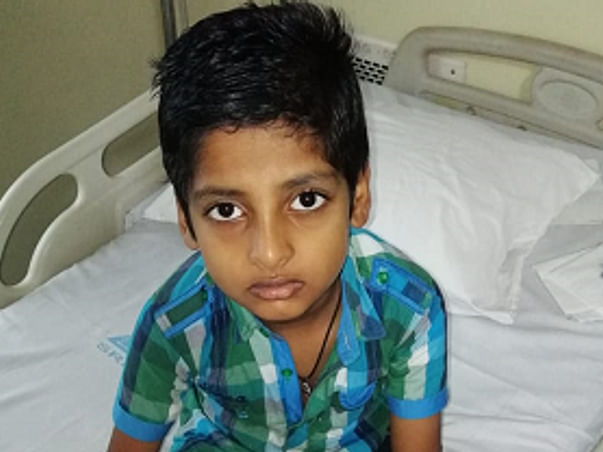 Share
The only thing that distracts Gabriel from the world of needles and tubes that have now become his life, is drawing. He gets lost in his art and forgets his pain, even for a few minutes. But now, Gabriel has no escape from the excruciating pain of cancer. Whenever the nurses put a needle in him, he flinches and asks his parents ‘Why me?’ He wants to know why he is in the hospital and why his joints hurt so much that he can’t even move. Little does this innocent child know that blood cancer is destroying his body, cell by cell. He cannot survive without urgent treatment, but his parents are running out of money to save him.

“He has always been a very curious kid. We tell him to take rest but he comes up with more questions instead. His mother and I tell him all kinds of lies. Our poor baby believes us. I don’t know how much longer we can keep doing this”-Joseph Daniel, father of 6-year-old Gabriel.

Around 2-3 weeks back, 6-year-old Gabriel was so excited about going back to school after a long summer vacation. Before his excitement wore off, he fell sick with high fever that did not subside for a few days. Even several trips to the local doctor in his hometown of Porur in Chennai could not make him alright.

“We did a blood test soon to find out what was wrong with him. As soon as the test results came in, were referred to another super-specialty hospital because the doctor told us that things did not look good for him”-Jennifer, mother

Gabriel had abnormally low levels of hemoglobin and a very low platelet count in his blood. There was no time to waste and he got a transfusion as soon as he reached the new hospital. After a day or two, the doctors broke the news to his unassuming parents that their child had cancer. It shook them.

“Just a week ago he was telling about all the things he would like to do at school this new academic year. Now he has been diagnosed with cancer. This is devastating. Nothing could have prepared us for this.”-Joseph, father

Gabriel is incredibly close to his mother. Jennifer couldn’t hold back her emotions in front of the doctor when she learnt of his cancer, but tried to be calm in front of him. However, she fell ill soon after.

“She had burning fever for two days. We have a 3-year-old daughter too – it was very difficult for Jennifer to take care of her and deal with the fact that Gabriel was very ill. I saw her struggling with herself for the first time in my life”-Joseph

Joseph tried to sell the only piece of land he owned to fund his son’s treatment, but in vain

Joseph works in a private company in Chennai, for a modest salary. He was somehow able to take care of his three-member family without any problem till now. But Gabriel’s sickness has been a rude shock to him. He cannot fund his son’s treatment and needs help.

“I have spent almost Rs 2,80,000 on his treatment so far. I had to borrow from friends and family for arranging this amount. But Gabriel needs more than that to survive. An injection he has to get once every two weeks costs Rs 55,000 alone. How will I fund the rest of his treatment? Real estate is down and I am not even able to sell my land in this emergency”-Joseph

Cancer has made Gabriel so weak and his whole body aches as a result now. He needs intensive chemotherapy to survive. His cancer is so fatal that it can spread to the rest of his body without proper treatment. His father, Joseph, has not gone to work for the past 3 weeks and therefore his financial condition is very poor. He has already used up all his savings for miscellaneous hospital costs till now. Gabriel deserves a chance to live, and you can give to him.