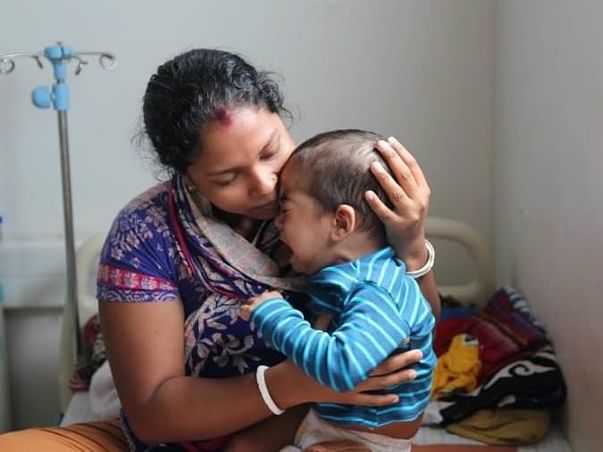 Share
“His cries resonate throughout the hospital ward. We can’t leave him alone for even a minute. He’s in pain and discomfort all the time. The only time he feels a little comfort is in our arms, but we’re afraid that we might never get to hold him again if we can’t get him the treatment he requires.”

When Biswajit and Chandana celebrated Arnab’s first birthday in their home in Shantipur, West Bengal, they never imagined that a year later their lives would be completely turned upside down. Arnab celebrated his 2nd birthday in the confines of a hospital in Bangalore. Arnab has blood cancer and his condition is critical. The only thing that can save him now is chemotherapy for the next 3 months.

Arnab's parents were told that he was racing against time

Baby Arnab was only 15-months-old when he started getting recurrent fevers. Chandana thought it was a regular fever that would subside in no time. However, Arnab’s condition didn’t improve. She noticed that his stomach was suddenly bloated. On taking him to a doctor in their village, Chandana discovered that her baby was sicker than she imagined.

“Even when the doctor told us that his blood count was low, we didn’t ever think that he would have a disease as grave as cancer. A few tests later, we were told that it was a very terrible form of blood cancer and we had to take him to a bigger hospital to get treated, otherwise, he will not survive.”

Biswajit and Chandana had no money, but saving their son was their priority. The took him all the way from West Bengal to Bangalore for treatment by borrowing from the people in their village.

Baby Arnab's only hope is chemotherapy

Arnab has been undergoing chemotherapy in Vydehi Hospital, Bangalore for 6 months now. While the treatment makes him extremely restless and cranky, it is his only hope for survival.

“He had no chance of surviving in the village. Once we got him to the city, we were a little more assured that he would make it with the right treatment. But we can’t afford to pay for it anymore. We took a loan from our village and are in 3 lakhs of debt now. We haven’t been able to contribute even Rs. 10 from our own pockets to help save our son.”

Biswajit is a daily-labourer who works on other’s farms to earn a living. He’s the sole breadwinner of the family and supports his ailing parents, wife and two children with his income. Biswajit hasn’t been able to work for 6 months now. He is completely dependent on the loan from the village, which has already been exhausted on Arnab’s hospital bills so far. He’s now helpless.

Baby Arnab was only just learning to walk before cancer took away his childhood. His parents dream of a bright, healthy future for their little one, while his sister, Tuli (7), is waiting to play with him again. This might never be a reality if Arnab doesn’t get the treatment he needs immediately.

Baby Arnab has been suffering from blood cancer for nearly a year now. He will be closer to being cancer-free with chemotherapy. However, his parents can’t afford the 5 lakhs needed for his treatment. They’re already in debt and have no one else to lend them a helping hand. Arnab needs chemotherapy for the next 3 months to live.

Your support will help Arnab be free from the misery of blood cancer.

Donate
2 supporters
1%
Raised
Rs.400
of Rs.30,000
Only INR donations accepted towards this cause
Card, Netbanking, Cheque pickups
Or Donate using