Helpless Mother Struggles To Save Her Newborn Twins | Milaap

Helpless Mother Struggles To Save Her Newborn Twins 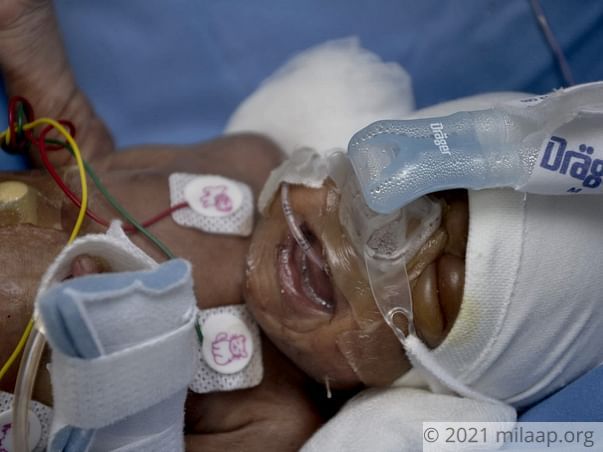 Sowndarya often finds herself lost in her own thoughts as she walks through the wide corridors of the hospital, making her way to the ICU, where her twin babies are fighting for their lives on ventilator support. It has been days since she’s had a proper meal, but she doesn’t mind. As weak as she feels, all she worries about is how her baby girl and boy are amidst the beeping noises of the machines, and all the tubes that run through their frail bodies. Her babies are barely a month old and have spent every minute in agonizing pain. Soundarya’s twins need to stay in intensive care for longer to survive, but for a few crumbled ten-rupee notes and coins, Soundarya has nothing left to save them.

They eagerly waited for the birth of their twins, however, fate dealt them a cruel hand

The news of Sowndarya’s pregnancy has been the happiest one for her and her husband. Everything they did from then on, was in preparation for their arrival. Whether it was buying little caps for them or cutting back on their own needs so that they could save up to buy them a crib, Gopi and Sowndarya felt ready to be parents.


“We were excited and found happiness in little things. Every time I felt them kicking, I would call out to my husband and we both would place our hands on my stomach, eagerly waiting for another movement. But in the seventh month of my pregnancy, I felt something that was nothing like I had felt before. It was a pulling pain in my stomach. I knew then that something was gravely wrong.” – Sowndarya, mother

The twins were born fighting for their lives, only continued treatment can save them

Sowndarya and Gopi’s twins were born premature in a small hospital in their town in Andhra Pradesh. They were both born severely underweight, and both struggled to breathe. They were immediately taken to the NICU. Ten days after their birth, they were rushed to Bangalore in an ambulance, their condition deteriorating. However, the little fighters have made it this far, but they’re still not out of danger. Their baby girl is now 1.6 kgs, while their baby boy is 1.3 kgs and has a severe infection that has spread to his eye. They need to stay in the NICU for longer to make it.

Miles away from his family, Gopi is doing his best to try and afford the treatment

As Sowndarya waits in the hospital, Gopi is miles away in their hometown, working day and night to try and afford their twins’ treatment. With piling medical bills and no savings, the devastated parents are struggling.

“My husband calls me every day to check on the babies. I have nothing new to tell him, and sometimes I don’t do anything but just cry to him over the phone.” – Sowndarya

Gopi works as a daily wager and on good days, earns Rs. 400. But his minimal income isn’t enough to continue the twins’ treatment. They have nothing left now and are in desperate need of help.

Sowndarya and Gopi are waiting for the day they can take their twins back home in their arms. The little ones haven’t known a life outside the hospital, and only continued NICU treatment can help them survive. Sowndarya and Gopi, however, have nothing left to afford the life-saving treatment. They need your help to save their 24-day-old twins. 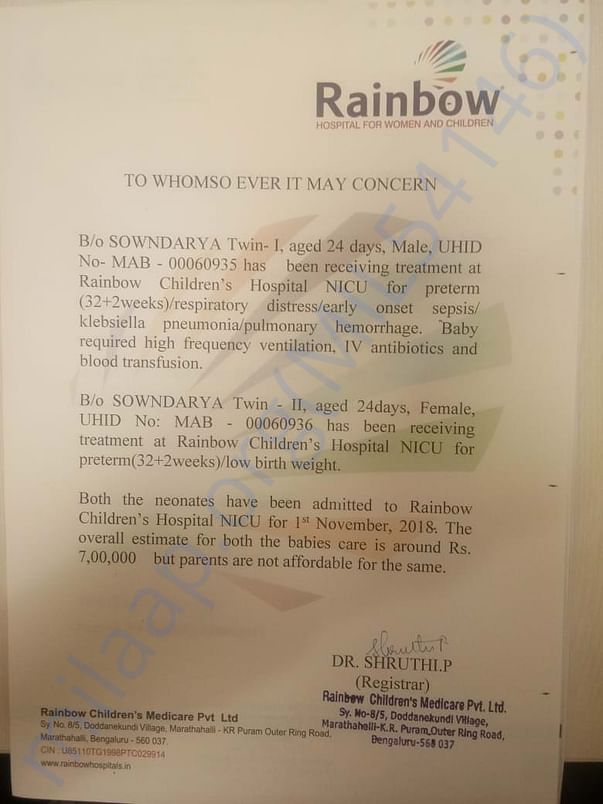 Here's an quick update on Twins of Soundarya. Twins have been discharged. They are doing ok and responding to the treatment slowly. We shall keep you posted.

Scan & donate with any app
check_circle_outline Download payment receipt
Report fundraiser
Know someone in need of funds for a medical emergency? Refer to us
Rs.42,442 raised

Donated to this campaign via Bank transfer/QR Code? Click here if you can’t find your donation listed below.
S
SURJEETSINGHBISHT donated Rs.500
A
Anonymous donated Rs.501

May God Bless them

WILL BE WAITING TO HEAR FROM THE TWINS

Dear Parents, Please take your meal properly as your babies required you because they don't have anyone after you. so take care of your health also. God bless them.

Donated to this campaign via Bank transfer/QR Code? Click here if you can’t find your donation listed below.
S
SURJEETSINGHBISHT donated Rs.500
A
Anonymous donated Rs.501

May God Bless them

WILL BE WAITING TO HEAR FROM THE TWINS

Dear Parents, Please take your meal properly as your babies required you because they don't have anyone after you. so take care of your health also. God bless them. 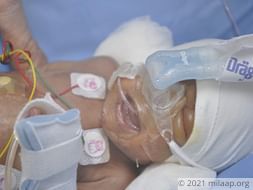 Helpless Mother Struggles To Save Her Newborn Twins