These Parents Are Fighting To Save Their Daughter From Cancer | Milaap
This campaign has stopped and can no longer accept donations.

These Parents Are Fighting To Save Their Daughter From Cancer 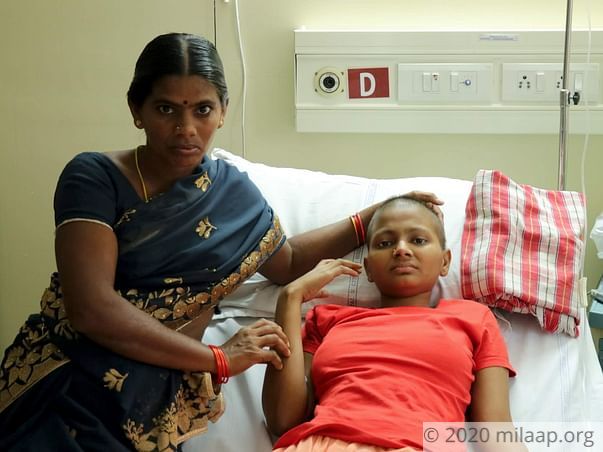 "We thought it was over, that we were going to get our daughter back. But now they say the cancer has spread." – Koteswara Rao, father

The past six months have been hell for Koteswara Rao and his wife Samarajyam. On January 25th their daughter, Sravani, suddenly collapsed while playing with her friends. An anxious visit to the doctor and a few expensive medical tests later they received the diagnosis: their 17 year old daughter had cancer in her leg.


"They told us that she needed chemotherapy, but it was so expensive. We’re farmers, we don’t have that kind of money. I just kept borrowing more and more, 5 lakhs in total, and was able to afford 5 months of treatment for her." – Koteswara Rao, father

But it hadn’t been enough. Not only had the treatment failed to get rid of the cancer, the tumor kept growing at an alarming rate. It had gotten to the point where it seemed like amputating her leg was the only way to save her life, and these desperate parents agreed to let the doctors try.


“It was such a horrible choice, but I could not lose my daughter, even if it meant she had to lose her leg." – Koteswara Rao

In a moment of divine providence perhaps, however, merely a day before the surgery was scheduled, this family learned there was a third option after a consult with a visiting doctor, and they immediately opted for it. They brought Sravani to Hyderabad, where an expert surgeon was able to cut out the tumor from her leg, and reconstruct the area with skin grafts from her thigh.

Unfortunately, they were too late

They were able to save her leg, but additional scans have revealed that the cancer had spread before they got to it; a tumor has formed in her abdomen, and it is growing by the day. If it isn’t stopped now, the cancer will spread even higher up her body, and Sravani's internal systems will shut down one by one.

Since these pictures were taken, Sravani's condition has worsened drastically. She is in an unimaginable amount of pain all the time. She needs another surgery, and more chemotherapy treatment, to beat this cancer once and for all.

Her family has run out of money. You are Sravani's only hope. With your contribution, she can live a healthy life.
Estimate Letter 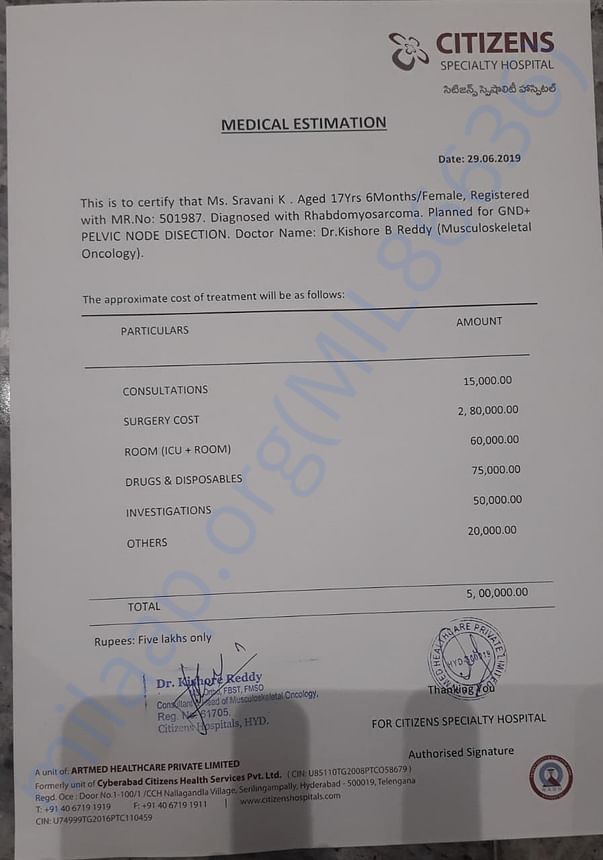 Sravani is doing well after the surgery. Thank you all for helping her to get the surgery done.

Zoha has completed her surgery & chemotherapy. Her treatment is still ongoing .She is doing well.

Thank you for support.

Report fundraiser
See how thousands are crowdfunding for their causes on Milaap
Rs.541,736 raised

Donated to this campaign via Paytm? Click here if you can’t find your donation listed below.
VK
Vijayalakshmi donated Rs.1,001

She will certainly recover. Muruga

Donated to this campaign via Paytm? Click here if you can’t find your donation listed below.
VK
Vijayalakshmi donated Rs.1,001

She will certainly recover. Muruga 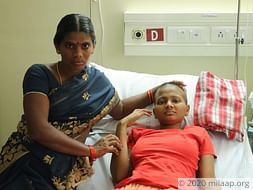 These Parents Are Fighting To Save Their Daughter From Cancer