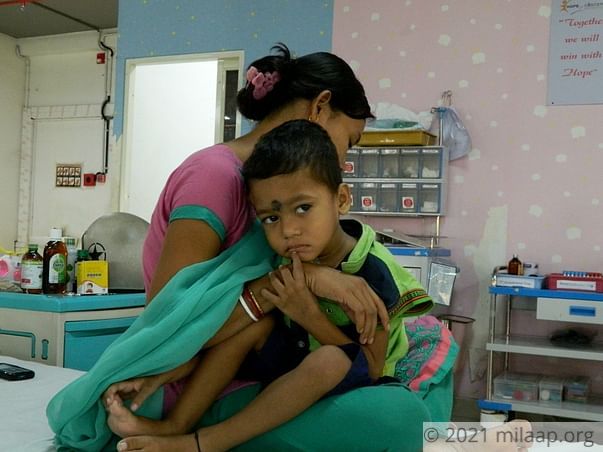 "He keeps yelling 'Mumma! Chodo mujhe! Ghar jana hai! Dard ho raha hai!' Even when another child in the ward gets an injection, Sabrana gets scared and tries to run away. He thinks it will again be his turn. He does not like chemotherapy. He says he feels like he is dying." - Lipika, Mother

At the hospital, Sabrana nibbles on his toy helicopter, as he watches the nurse move around the ward. The moment he realizes she is preparing his medicines, he starts screaming. He does not know that he has cancer. He says the medicines are worse than the fever and thinks that they are trying to kill him.

Something had stolen Sabrana's spark

3-year-old Sabrana is the youngest of three siblings. He just joined the Government ICDS school at Mollarchak in West Bengal. In January, Sabrana was admitted to SSKN Hospital, with a high temperature that did not subside for over a month. After 12 days, he went home, and everything seemed normal until March when the fever came back.

"I had not noticed before because he used to lie down most of the time. He had a swelling on the back of his head and one near his cheek. My son is like a pataka. It is difficult to make him sit in one place. It worried me when he became very dull and silent at home." - Lipika

This cancer is wasting no time in spreading through his body

When the hospital ran more tests, Sabrana was diagnosed with High-risk neuroblastoma. It was spreading quickly and he needed chemotherapy immediately. The family was referred to Vydehi in Bangalore.

"Other children play around this ward. He sticks to me. Cries if I leave him. He just had his first round of chemotherapy. The swelling came down so I thought it had cured him. The doctor told me this is only the beginning. If we stop now, he could die within a month." - Lipika

The atmosphere around him is thick with fear and pain

Sabrana cannot walk. Cancer and chemotherapy have weakened him. Every five minutes he cries out of pain, and he calms down only if his mother gives him the helicopter.

"I ask him what is happening because he screams so much. He says, 'Pata nahi Mumma! Darr lagta hai.' I watch him struggle to sit on the bed. He just falls on my lap. He wants me to hug him. He asks me to protect him from 'it'. Even though he does not know what cancer is, he feels it." - Lipika

Sabrana's father, Biswajeet, is a farmer. He is unable to join the family as he recently broke his arm in an accident. He is at home in Mollarchak taking care of their two daughters. Every morning, he goes door to door collecting money for Sabrana's treatment. Biswajeet lost his daily wage job after he broke his arm.

"They said he works slower with one hand. They cannot risk it. So they hired some other person instead. My husband used to make at least 3000. Now when we need 10 lakhs, he has no work." - Lipika

Sabrana's uncle Gautam brought the mother and son to Bangalore. The family sleeps on the cold hard floor in the small space next to Sabrana's bed. Sometimes, if the ward is full, they sit in the corridor. Sabrana's mother holds him all day long. They are unable to pay for food, medicines and even a bottle of water.

Sabrana's elder sisters are waiting for their baby brother to return. This child has very few days left in his life unless he receives immediate treatment. Your support can help him beat cancer and go home alive. 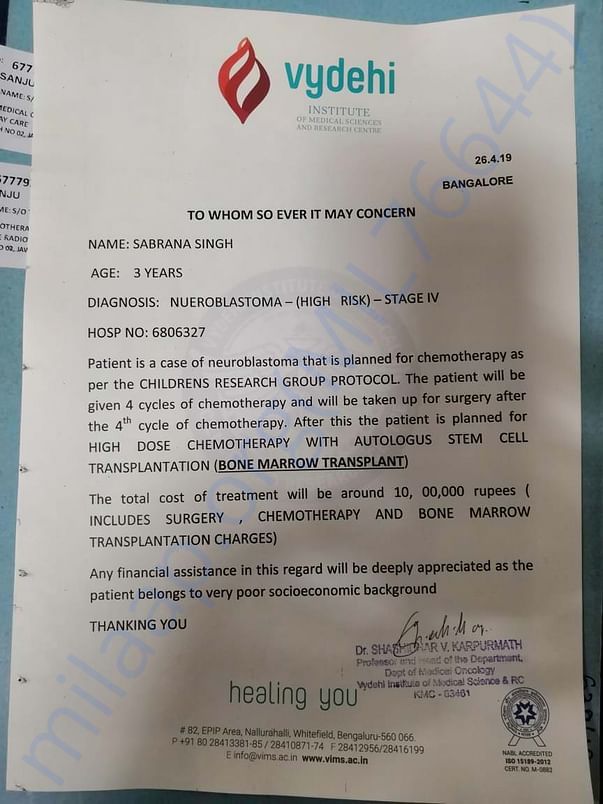 Scan & donate with any app
check_circle_outline Download payment receipt
Report fundraiser
Know someone in need of funds for a medical emergency? Refer to us
Rs.522,962 raised 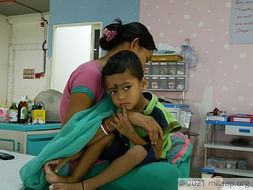