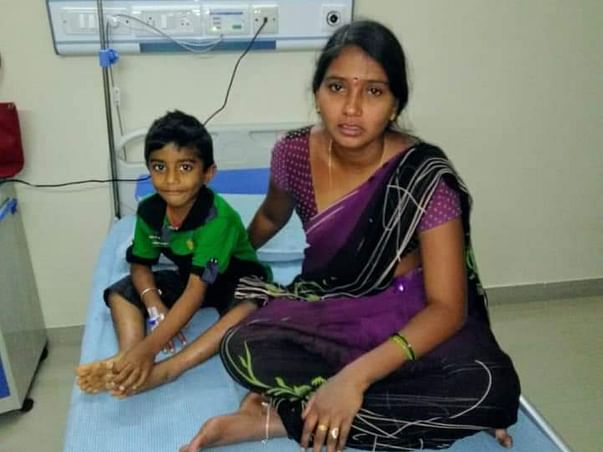 “A month ago, when my husband called me I could no longer hide the fact that our son (6) is battling with a serious disease. Every time he calls, the first thing Santosh asks is about Adithya - that day, after he heard that our son won't live without a transplant, he broke down. He didn't hesitate to fly down from Dubai - even if it meant putting his job at risk. It took him 15 days to get his visa and now both of us are struggling to save our only son,” - Radha, Adithya’s mother.

Two months ago, Adithya was suffering from high fever and his mother took him to a local doctor. Even after having medicines for a week, his fever only spiked up. Transfusions, too, didn't improve Adhitya's condition. So with the help of her brother-in-law, Radha managed to admit her son in Hyderabad. The tests revealed that Adithya was suffering from aplastic anaemia, a condition in which the body stops producing enough new blood cells.

“Adithya is in a lot of pain, especially when he is undergoing transfusions. But since as long as Santosh sits beside him, he doesn't get afraid - in fact, he smiles through the pain,” - Radha.

Adithya had undergone blood transfusions four times in a month. His blood count is only reducing as the days pass by. Without urgent bone marrow transplant, his body may soon give up on him. Before undergoing the transplant, Adithya needs chemotherapy.

“He is very prone to infections and we make sure all the things he uses are washed. His mother takes great care in preparing his food. When I am around, I always carry him in my arms so that he doesn't fall - he won't stop bleeding if he falls down. He is too weak to play but he loves it when I imitate his actions, that's the one thing that brings a weak smile on his face,” - Santosh.

This migrant worker who was struggling in a different country to provide better life to his family, cannot afford life-saving transplant for his son

Santosh does odd jobs like washing cars and cleaning houses in Dubai and earns only Rs 14,000 a month. He started his new life last December to earn more money and take better care of his family. Earlier, he was a daily wage labour who used to barely earn Rs 300 a day in Hasnabad Village, Telangana State. But all his hopes to provide a better life was crushed by his son's disease. The family has borrowed from friends and relatives and have already spent 2 lakhs until now. They cannot afford the transplant that costs 20 lakhs.


“I went there as a labour to provide better education to my son. I have hardly earned anything in this three months. My first and third month salary were only spent on the flight tickets and visa, one to go and the other to come back to India. I was able to give only second month salary to my wife. With nothing left in hand, I am struggling to keep my child alive. I am ready to be the donor to save my son but without help I cannot afford the transplant. Life is meaningless without my only son, Please help me,” - Santosh.

Santosh was working hard for his family in a different country though it meant staying away from them. But his situation has only worsened and he needs help to save his 6-year-old son. Your kind contribution can help Adithya survive.