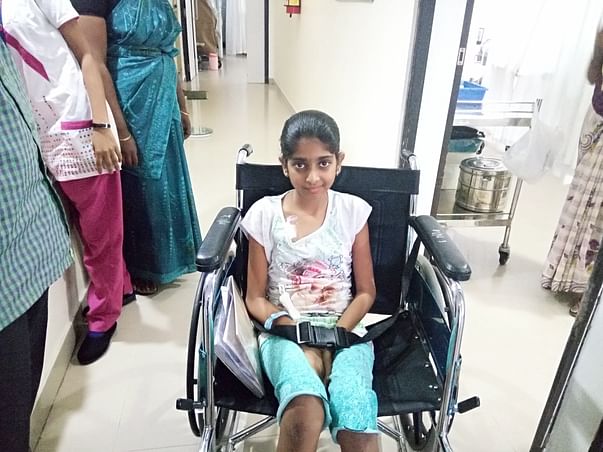 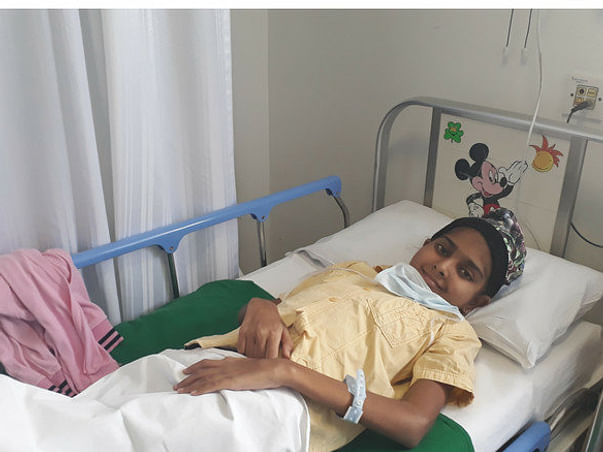 13-year-old Ankita was looking forward to her first day at boarding school. She was ill the day she went in for the admission. Within 8 days, Ankita was in a serious condition and her parents heard from the doctor that their daughter has cancer. Now her family is struggling to save her.

She just started classes at the new school
“Her cousin joined the school for PUC. They are very close, so she also told us that she wanted to go. My 3 younger daughters are not interested in academics. Ankita is good at studies so we are happy to send her wherever she wants to go.”

Basavaraj and Bharathi escorted their daughter to school for an entrance exam. She was running a temperature in the morning. They gave her paracetamol, and sent her for the exam. She fared extremely well and was accepted immediately. By the next day, her fever was back, so Ankita’s parents took her to a local doctor who gave her a shot. They dropped her off at the dorm and left the school.

“We missed our bus, so we stayed back in town. We met her the next day by when her fever had gotten worse. At the hospital the doctor checked her blood report. Her ESR count was high. He said it needed to be much less. She was admitted for 2 days, after which she went back to school, and we came home."

Basavaraj had to rush to the school thrice in a week as Ankita's condition kept getting worse until the school sent her to Mangalore. At the time, she was not able to even climb the stairs or walk because of severe pain in her limbs.

We Thought It Was Just A Fever Until They Told Us My Daughter Had Cancer
Ankita was treated by a psychologist who suggested that the illness may be psychosomatic in nature. The parents took her home and in no time, her condition deteriorated further. Upon further investigation, they found out that she has blood cancer

No father will be able to tell his daughter that a disease is killing her
Basavaraj breaks down when he thinks about his daughter’s condition. When she asks him questions about her condition, he is hesitant, to tell the truth. As far as Ankita knows, she just has a blood infection that can be treated only at HCG hospital in Bengaluru.

“She is smart. She knows what oncologists treat. But I tell her, that they are specialists who also treat her infection. She is a brave girl, but I’m afraid that, the truth would do more harm.”
How you can help
Ankita is now battling cancer without even knowing it. Her treatment is estimated to cost nearly Rs. 19 Lakhs, an expense Basavaraj cannot afford on his income. He is grief stricken over her state and needs your help to save his daughter.

With our support this 13-year-old can survive cancer