He Bleeds From Mouth Constantly, He Can't Drink A Single Sip Of Water | Milaap
This is a supporting campaign. Contributions made to this campaign will go towards the main campaign.
This campaign has stopped and can no longer accept donations.

He Bleeds From Mouth Constantly, He Can't Drink A Single Sip Of Water 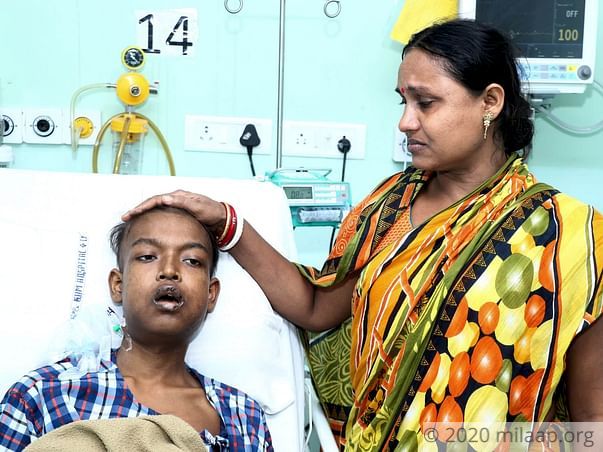 Saroj used to hardly be at home. His parents, Savitri and Gourango, would often get complaints from neighbours about their son. He would have either broken their windows or stolen the ripest mangoes from their trees.

We would get angry at him everyday. But he would never listen. He was the naughtiest kid in the neighbourhood and look at him now. He can’t even get up from his bed. Even drinking a sip of water pains him so much. He bleeds constantly from his mouth - it hurts him to even close his mouth,” - Savitri, mother.

Saroj (17) has a dangerous form of blood cancer and it is in an advanced stage. It is spreading fast, he needs immediate treatment - even a day’s delay can cost his life.

Saroj was never very interested in studies, he had stopped going to school for a long time now. He was helping his father at work but mostly he was found playing cricket or football with his friends. But in May, for one day, Gourango saw that he was not getting up from his bed.


“He is not someone who’ll stay in the house for an entire day. I knew something was wrong. I thought he had made some fresh trouble somewhere. But what I found out was even scarier. His left leg had swollen up. He didn't tell us anything for fear of getting scolded. I felt guilty. I immediately took him to the doctor,” - Gourango, father.

He can’t even talk, he just signals to his parents when he is in pain

In just a matter of few days, Saroj started turning into something else. His entire body started swelling, he was bleeding from his gums too. It was a horrifying sight. The medicines were not working. Gourango somehow managed to take him to Bhubaneshwar, he had lost faith in the doctors in his hometown, Baleshwar.


“Here we got to know that my son has cancer. They said it’s very advanced. He needs strong chemo, only that can save him now.”

He was started on chemo. But the parents couldn’t say if he was getting worse or better. In front of their eyes, their teenage son lost all his hair. He has become very thin - it’s difficult to recognise him. He can’t even talk, he just signals to his parents when he is in pain.

He is very critical, they can’t stop his treatment

The doctors have told Gourango that his son can’t be taken off the chemo. That’s his only hope. But it would cost him 12 lakhs. For a small carpenter like Gourango, the amount is a lot. He has already spent over 2 lakhs in the last 2 months.

“I know it’s a lot of money. But does that mean I will not leave my son to die? I can’t do that. I am calling my employers, my relatives - anyone who can help me now. My son needs me, I can’t fail him.”

Saroj needs the treatment now, he is getting critical with every passing day. But despite doing everything in his capacity, he can't arrange the money on his own. You can help him save his son 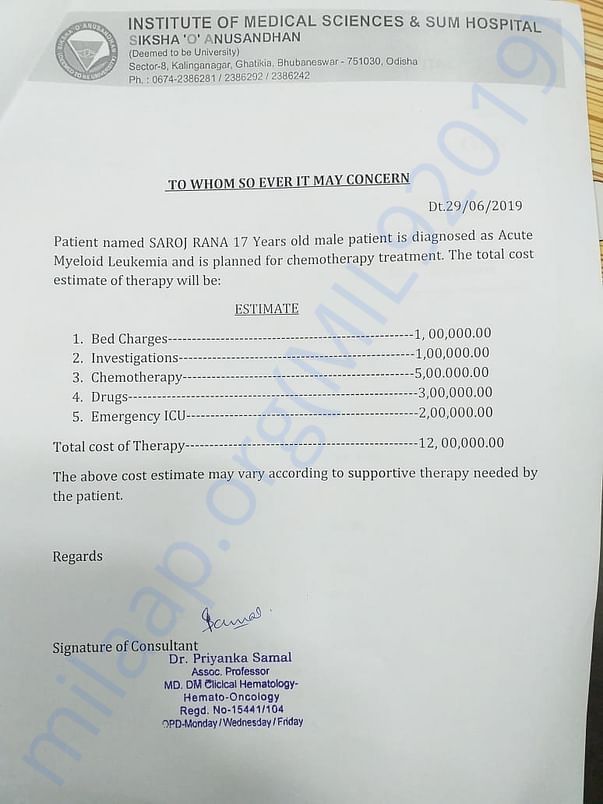 Saroj is no more with us. His health deteriorated and he unfortunately could not make it.

The funds raised will be used to settle the hospitals bills.

Thank you all for the support. Means a lot to us.

We would like to inform you that Saroj is doing better as the blood platelets and the White blood Cells have also increased, he is under strict supervision of the doctors.

Thank you for all the support and love.

Regards,
Gouranga
(Father)
Donate
Report fundraiser
See how thousands are crowdfunding for their causes on Milaap
Content Disclaimer: The information and opinions, expressed in this fundraiser page are those of the campaign organiser or users, and not Milaap.
If such claims are found to be not true, Milaap, in its sole discretion, has the right to stop the fundraiser, and refund donations to respective donors.

You are sending a message to
Giving is Gud
Go back 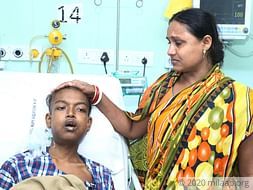 He Bleeds From Mouth Constantly, He Can't Drink A Single Sip Of Water