I Cannot Even Afford To Travel To The Hospital, Help Me Save My Son | Milaap

I Cannot Even Afford To Travel To The Hospital, Help Me Save My Son 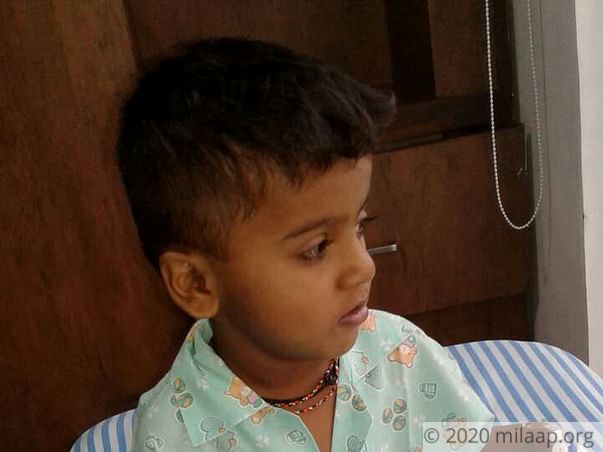 “Even if I start talking about how he’s (Darshil) feeling, I start crying. I can’t describe what I’m going through as a father. On top of that, I’m unable to even provide for our travel expenses to hospital, that’s how terrible the situation is.” – Ashok, Darshil’s father.

Darshil at the hospital

Apart from having the trouble to juggle between his job and travel to a different state for his son’s treatment, Ashok is facing serious challenges as his 3-year-old son is suffering from a severe form of blood cancer and needs chemotherapy as a life-saving measure. Ashok, a barber by profession, is doing all he can to provide for his son’s treatments but he feels helpless because he has nothing left to save Darshil.

Darshil is suffering from a severe form of blood cancer

Back in August 2017, Darshil couldn’t just get rid of the fever and would frequently, fall ill. His stomach would be bloated and the 3-year-old was extremely feeble. Worried, Ashok got him checked up and on receiving the results of the tests, his wife, Hemlata and his soul were completely crushed.

They got to know that their 3-year-old son was suffering from a severe form of blood cancer known as acute lymphoblastic leukemia. If untreated, this can spread quickly and prove to be fatal in no time. As an immediate measure, Darshil had to start chemotherapy, and now, he needs additional chemotherapy to survive.

“When I got to know about his condition, I felt that he won’t get the best treatment because I’m so poor.  My wife couldn't stop crying. Any mother would cry if she knew that her baby was suffering from a life-threatening condition. “ – Ashok

Darshil has had major emotional changes

Once described as a naughty, playful and adventurous child, now, Darshil loses his temper quickly and gets frustrated with his parents and his situation.


Darshil, before he lost his hair

“He was so playful, happy and a naughty child. It is so hard to watch what he’s going through. He has lost all his hair and he also gets very angry. He feels very weak and all his activities have reduced. He gets frustrated because he’s not able to roam around with me too.” – Ashok

The 3-year-old’s only hope for survival is to receive additional chemotherapy for the next 8-10 months and then receive additional treatment if that is successful. Ashok, who doesn’t have the money to afford their journey to the hospital, is running out of time to provide for his son’s life-saving treatments.

For chemotherapy, along with his family, the 3-year-old travels to Ahmedabad in Gujarat from Udaipur in Rajasthan at least 2-3 times a month. Just the travel expenses for each trip are around Rs. 2500 which is half of Ashok’s monthly salary.

To keep earning, even if it’s just a little, Ashok continues to go to work and takes care of his sick son. He can’t afford to stay in Ahmedabad. Ashok needs assistance from others to help provide for the additional chemotherapy his son needs.

Ashok is in dire need of help

Ashok works as a barber in Udaipur and earns a meager sum of Rs. 5000 every month. Through this, he provides for his wife, Darshil and his 6-year-old daughter, Priyanshi. He has no savings and to provide for Darshil’s treatments until now, he has borrowed Rs. 1.5 lakhs on interest from his acquaintances. He has exhausted all his resources and has absolutely nothing left to save his son.


Darshil and his grandmother

The total cost of the chemotherapy and other treatments that follow is estimated to be around Rs. 5 lakhs. Ashok, simply, can’t afford such a large sum even if he worked for a decade. He is left with no option but crowdfunding. Now, he needs our help to save his son.

3-year-old Darshil needs additional life-saving chemotherapy to fight a severe form of blood cancer. His father, Ashok, who is a barber, has no way to provide for his treatments and now, he needs your help to save his 3-year-old baby.

Your support and contribution can save 3-year-old Darshil. 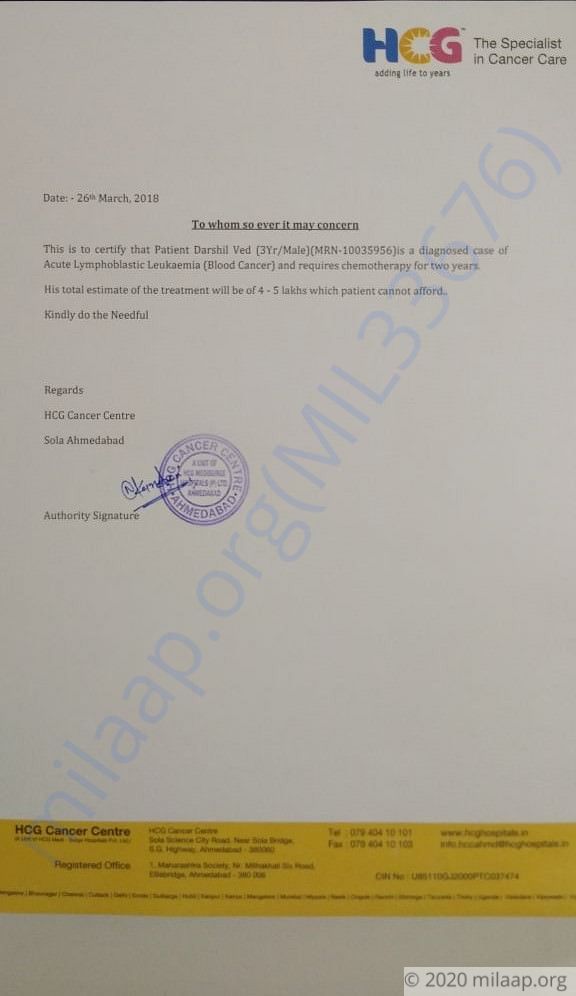 Thank you for the wonderful support that you have shown towards Darshil. He has completed the initially prescribed chemotherapy cycles and the treatment of 6 months.

He is doing much better now compared to earlier. He will be on maintenance chemotherapy ( oral tablets) for next two years so that cancer does not relapse. The doctors will be closely monitoring his health as well during this period and based on his health they will be deciding on the future course of action.

Thank you for the wonderful support. Please do pray for his health and speedy recovery. Do share this campaign further with your friends and family. Will keep you posted.

Thank you!
Donate
Report fundraiser
See how thousands are crowdfunding for their causes on Milaap
Rs.70,247 raised 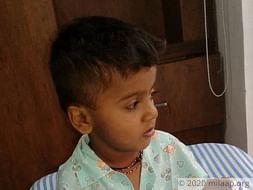 I Cannot Even Afford To Travel To The Hospital, Help Me Save My Son