You Can Be This 2-year-old Superhero's Secret Weapon Against Cancer | Milaap
This is a supporting campaign. Contributions made to this campaign will go towards the main campaign.
This campaign has stopped and can no longer accept donations. 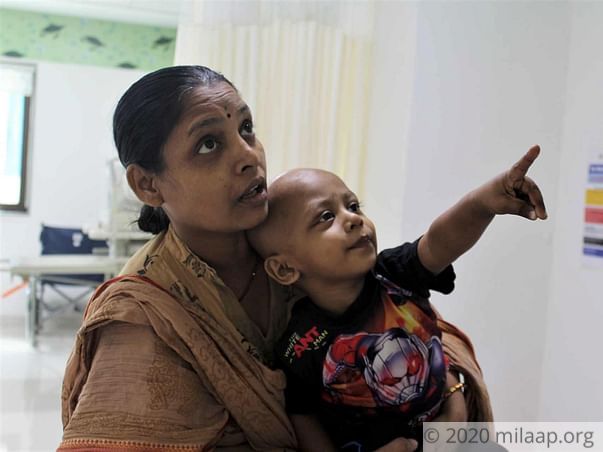 Arav is sitting for his 6th cycle of chemotherapy but he is not afraid of the 4-hour long treatment, not anymore. He wears a different superhero T-shirt everyday and draws strength from that to face his treatment. Even as he feels lightheaded, the sudden warmth, almost like his blood was burning, and his stomach flip, the 2-year-old argues why Spiderman is the best. Arav has neuroblastoma, cancer of the nerve tissue. His fight has just begun as chemotherapy is not enough to save him.

‘We cannot afford to fall sick, even if it a viral infection'

It is hard for Raj and Bharati to come to terms with the fact that their son has cancer. They still feel as if it was yesterday when Arav had a fever that would not subside. They were anxious while they went to the doctor - partly because they were afraid they could not afford medicines.

"We were careful about the food we eat, where we go, and avoid getting sick. When you don't have much money, and getting sick costs so much, you have no choice. Tests showed that my son has cancer. I don't know how anyone can avoid that." - Raj, father.

'There cannot be a pause nor a delay in his treatment'

Neuroblastoma starts from one of the adrenal glands on top of the kidneys. Arav's condition will get worse with time. It could spread to the rest of his body. He has already begun complaining of stomach ache and leg pain, which is an indicator. The family had to get started with chemotherapy soon after diagnosis.


“The chemo makes him weak and nauseous. But the doctors have told us that this chemotherapy along with radiotherapy will destroy the cancer cells in his body. It is like taking out the weeds so healthy plants can grow.” - Raj, father.

'It broke him when his hair began falling'

Arav’s head is shaved now as he got upset seeing hair on his pillow every morning.  He enjoys playing a toy guitar with his elder sister and is always chirpy. Raj and Bharati were terrified to know that their son would not be cured by the usual chemotherapy. He needs a stem-cell transplant. In his case, the doctors can use his own stem cells.

"I am going to be like Logan! When they finish the treatment, I'll be Wolverine! It was paining for him also but when he woke up, he was a superhero!" - Arav

Raj is a contractor who has been on indefinite leave since his son fell sick. No pay does not bode well for the family of four, especially since they emptied their savings.

"With help from some NGOs and my savings, I have spent about Rs 1.5 lakhs. But I still need Rs 10 lakhs for the transplant. Any delay in treatment can give cancer a chance to spread more and kill my son." - Raj

A child's will plays an important role in the success of a treatment. Arav believes he is a superhero. He loves life, and even though he has a terrible form of cancer, treatment can cure him. All he needs is your help.

Your contribution can be Arav's secret weapon against cancer.
Estimation letter 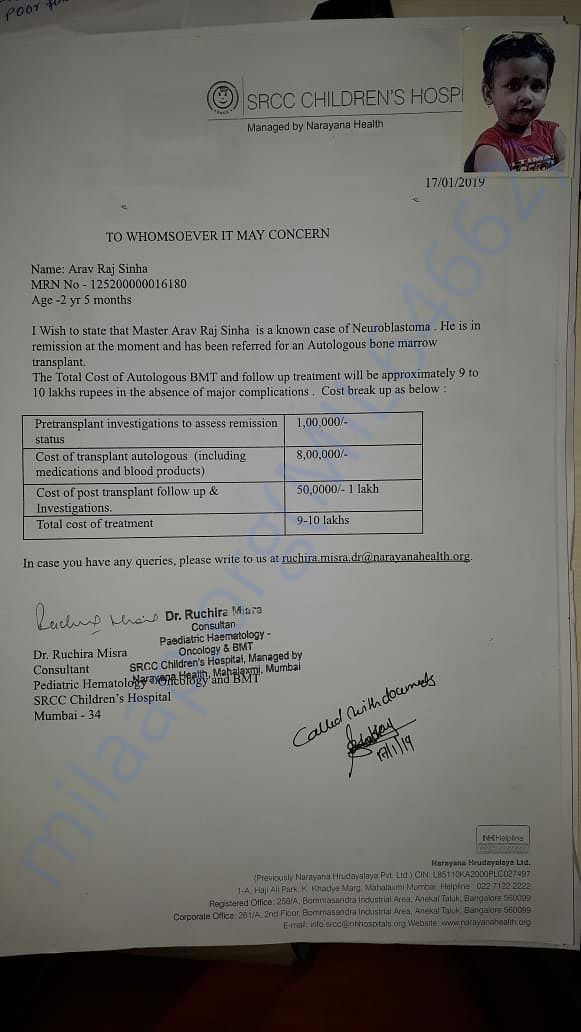 It is with a heavy heart, I am informing you that Arav passed away. Although his transplant was done, he developed some post-transplant complications which he did not survive. May he rest in peace. Do keep him and his family in your prayers. 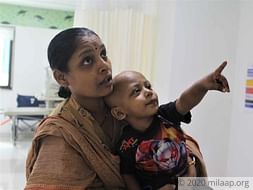