What I've learned from riding the bus in rural Tamil Nadu

By Shalini Kannan
09 March, 2016
Shares
Share on Whatsapp
The first time I climbed onto a bus in Trichy, I was captivated. The three seats on either side of the aisle were packed, even though this bus was much larger than the four-seat-wide buses I’m used to. The crowd overflowed into the aisles, where bodies swayed with every excessive horn blow and tactless lane change the driver made. A dense mass of colorful sari-clad women pressed up near the front; some even sat on the divider between the seats and the driver’s clutch. Ahead of me, I saw a sea of long, shiny, plaited black hair, many heads adorned with fresh flowers as well. There was standing room only, but I didn’t mind – there was so much to look at, and I was thoroughly entertained.
Outside, lush green fields and the banks of the glorious Cauveri sped past, along with rows of palms and two-wheeler traffic. Inside, an awesome, constant, and loud stream of Tamil movie songs blared. I later learned that only private buses, like this one, offer this delight – a real upgrade when compared to the quiet and grungy government buses that run the same routes. Private buses also showcase interesting muraled exteriors. My favorites I’ve seen so far include a giant white baby under a blanket and a scene of cartoons from Pixar’s “Rio.”
One of my favourite private bus murals:

Some of the many shades of green viewed out the window: 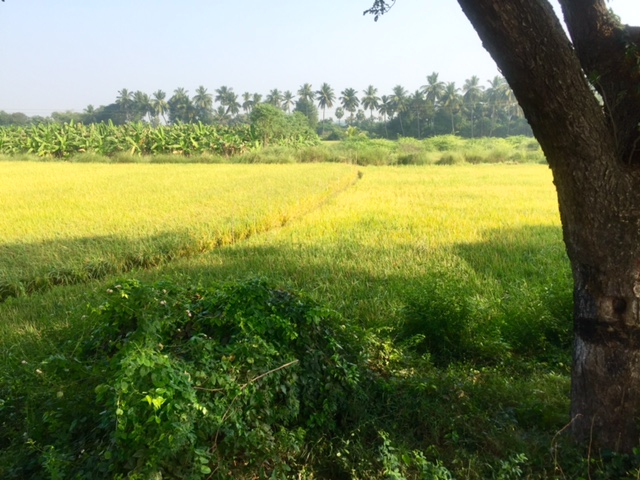 The music, décor and traffic here have been quite an experience for me. But no, these quirks are not what struck me most about bus travel in rural Tamil Nadu. Rather, it’s been the little scenes of kindness amongst this chaos that are so foreign to me, coming from my urban and western background. Though many people aren’t necessarily outwardly friendly on the bus, there is some sort of shared passenger solidarity that I’ve observed. A thirsty school girl requesting and receiving a drink from the bus driver’s water bottle. Strangers holding another’s baby in their lap by the window, so the little one can get a better view of the scenery he’s so transfixed with. There are all kinds of social barriers that stop these things from happening in more urban environments!
I’ve even been lucky enough to experience some of this solidarity myself. On a long ride from Trichy city to my village, the large crowd left me standing in the aisle, holding two big shopping bags. More than one seated passenger offered to hold something for me in their lap. On another packed journey with a particularly reckless driver, a smaller woman beside me grabbed for my shoulder when the bus swayed. She couldn’t reach the bar, and spent the next thirty minutes gripping onto me. We hardly spoke two words, but I was happy to hold her up. What goes around comes around on the bus, I thought.
Don’t get me wrong, there’s plenty to get irritated about on a Trichy bus commute too. Like how horn blows aren’t just a typical honk, but elaborate tunes at ear-splitting decibels. And not infrequently, somebody will start arguing with the ticket seller or another passenger. The buses in rural Tamil Nadu are far from peaceful, but they’ve proven to me that kindness exists, even amongst chaos.
The commotion and volume of rural India surprised me at first. Most rural areas I’d visited fell under the classic pastoral stereotype of being peaceful and quiet. I wondered how people enjoyed the simplicity of rural living when there was so much noise. But I’m beginning to understand that commotion is the way of life here. And when I look right past it, there’s still the kindness and kinship that distinguishes places like this from big cities.

Donate View all Borrowers
Security & Privacy Conditions of use © 2010 - 2023 milaap.org. All rights reserved.