Shares
Shares
Share on whatsapp
Thivyak (6) has suffered from pure red-cell aplasia all his life. This means, his body does not produce any red-blood cells. The disease causes severe anaemia and needs to be managed with drugs and blood transfusions.
Thivyak when taking chemotherapy before the BMT
Hoping to cure him, Thivyak's parents Shankar and Sumathi spent everything to get him a bone-marrow transplant. Unfortunately, he has contracted a deadly fungal infection after the procedure and his parents need urgent financial help to save Thivyak.

Thivyak's parents spent everything they for a bone-marrow transplant

Thivyak got blood transfusions from when he was just a year old. Since then, he has needed to take a transfusion once every 25 days. Regular transfusions are very damaging to the organs and the doctors suggested that Thivyak get a bone-marrow transplant (BMT). The procedure would trigger red-blood cell production in his body and he could lead a normal life.
For Thivyak and his parents – the bone-marrow transplant was the goal. It was when the transfusions and hospital trips would finally stop and Thivyak would go to school and be able to play with his friends. It was his parents' promise to him – he could finally have a normal childhood after the BMT.
Thivyak before his treatment started
Shankar is a silver jewellery polisher and makes around Rs10,000-12,000 per month depending on how many orders he gets. When Sumathi persuaded him to get their son a bone-marrow transplant, he took loans for Thivyak's BMT.
The procedure was done with some support from the Tamil Nadu government and Shankar and Sumathi – who had been saving up for the operation – spent over Rs 20 lakhs on it. Now, Shankar has exhausted all his means and is still paying back the loans he took for Thivyak's early treatment.
Unfortunately, Thivyak fell very sick after the transplant with a fever and vomiting. The doctors explained that he had contracted a fungal infection which could be deadly given his lowered immunity after the transplant. To pay for his treatment now is very difficult for Thivyak's parents.

Continuing treatment is a struggle for Sumathi

Thivyak is very close to his mother. She is the person he seeks when his transfusion needles don't go inside the right way. Diagnosed with pure red-cell aplasia when he was 4-months old, he has taken transfusions all his life.
Thivyak with his mother during his treatment

“Thivyak asks me why God made him sick. I have no answer to give him except – for one day – he will get better,” says Sumathi. Her son battling for his life after a serious surgical procedure like bone-marrow transplant is not the only challenge Sumathi has to battle.
Ever since her son fell sick, she has faced stiff resistance from her entire family. They are not supportive of spending away the family's fortunes on Thivyak's treatment. “Giving up on his treatment is not an option. I will take whatever help I can get to cure him from this infection,” says Sumathi.

Sumathi is not ready to give up

Despite facing a lot of hardship, Sumathi is not ready to give up on Thivyak. The family is tetering on the brink of utter financial ruin and it all be for nothing if they can't save him. Help save Thivyak and contribute now.

The specifics of this case have been verified by the medical team at the concerned hospital. For any clarification on the treatment or associated costs, contact the campaign organizer or the medical team.
Click to contribute to save Thivyak.
Donate 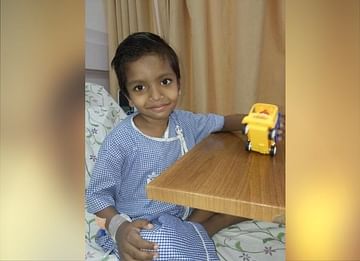 Thivyak has a good chance at recovery provided his parents can pay for the treatment.