They call her Ponni | Milaap

They call her Ponni

It is indeed love when one can ignore the banging of metal frame and the shrill whistle of bus conductors over the raucous songs emanating from speakers. I realized it when my mind could singularly focus on her, her serenity and the graceful meander of her golden body, despite the cacophony around. I was travelling from the nondescript village of Musiri to Trichy, in a colourfully painted bus, when this unrequited love happened.

I didn’t know her name, nor where she was going. I didn’t know if she would ever let me get close enough to immerse myself in her. And then I realised. What I knew as Kaveri river is locally called Ponni, the golden one. I decided to walk alongside her, at least for a short distance. Gunaseelam is one of the many villages that lay on her banks. I hopped off the bus and took to following her curves. She glittered in the mid-morning sun, looking like she was adorned with diamonds. The short distance from Gunaseelam to Vathalai ascertained me of one thing – she had many lovers. Farmers kneeled next to her, washing the mud off their sickles, while some women stood almost midstream, bathing and washing their clothes, oblivious to her current.

A little away from the river side, nearer to the Mukkombu Dam, lies a short path railing with a spectacular view of Ponni. As I leaned over it, drinking in the scene, an old woman hobbled towards me. Recognising me as city-bred, she struck up a conversation. I informed her I was from Chennai, forgetting that the people here recognised the place as Madras better than Chennai. She stared at me for a minute, stupefied. “Chennai?” she asked. I nodded. She paused for a minute. “I don’t know if anyone told you this,” she said, “but years before your city was called Chennai, the area here by the river bank was called Chennai/Chennapatnam. It is now that we have new names here.” Before I could ask her more about it, she walked away. I’m still researching, trying to verify what an old woman told me in passing, wondering how many other mysteries Ponni hid.

It has been a month now since I moved to the Kaveri belt, but the sight of her never fails to fascinate me. I travel to do field work and inevitably meet Ponni almost every single time. I see how she wields her charm and draws people to her. The lush green fields depend on her as infants do on their mothers. Fishermen carry their fresh haul from her depths every day. And from time immemorial, womenfolk have washed and splashed in her, laughing and crying about the dramas of everyday life, while Ponni steadily flowed by, marking, adjusting, and etching her presence on the lands and hearts of the people.

Did Karikala Cholan ever stand on Ponni’s shore, doubting himself as he carried out the humongous task of building the Grand Anicut? Did Raja Raja Cholan, centuries later, sit under a tree by the river bank, contemplating the construction of the Big Temple? Did Malik Kafur stand on this very shore triumphant with his victory over the Pandyans? And millennia later, did Kalki rest by the same shore, thinking up grand schemes for his books in which Ponni would play a vital role? The answers to these, I will never know. But for now I am happy to share shore-space with those who had changed the course of history over centuries.
Photo credit : Shalini Kannan 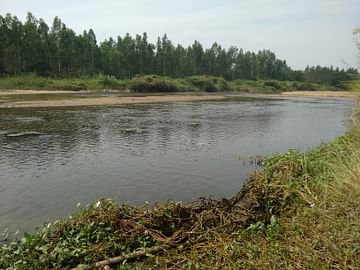 Donate Learn more before you donate
Security & Privacy Conditions of use © 2010 - 2021 milaap.org. All rights reserved.