R
You are sending a message to
Rohit
Go back

By Madhavi Gosukonda
30 June, 2016
Shares
Share on Whatsapp
Out of the 270 different snakes in India, only four poisonous ones ever kill people. Yet, every year, thousands - including endangered species - are killed out of fear and mis-identification. Rohit Gangwal, 35, is a jeweller and a dedicated animal rescue leader wants to help people stop being afraid of snakes.
With a few friends he started Raksha, an organisation that rescues and rehabilitates all animals in Jaipur. As the city spreads, habitats vanish and bring bewildered animals of forests into the city. What started as an initiative to help injured birds has today become an organisation that will help any animal in need. 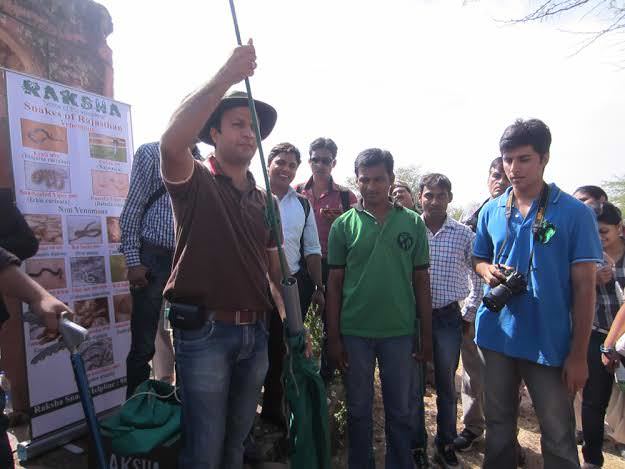 Rohit demonstrating snake handling with a dummy snake
Starting Raksha was inevitable
Rohit was doing what he did every year on Uttarayan – flying kites in the kite festival, 13 years back. He had not expected to be travelling around looking for a vet, with a profusely bleeding bird in hand. The bird continued to bleed even after it died.
But the bird's death left a mark on Rohit. He started Raksha with a few friends and began his mission to save and help injured birds. He juggled family business with rescue work, just to help another creature live. 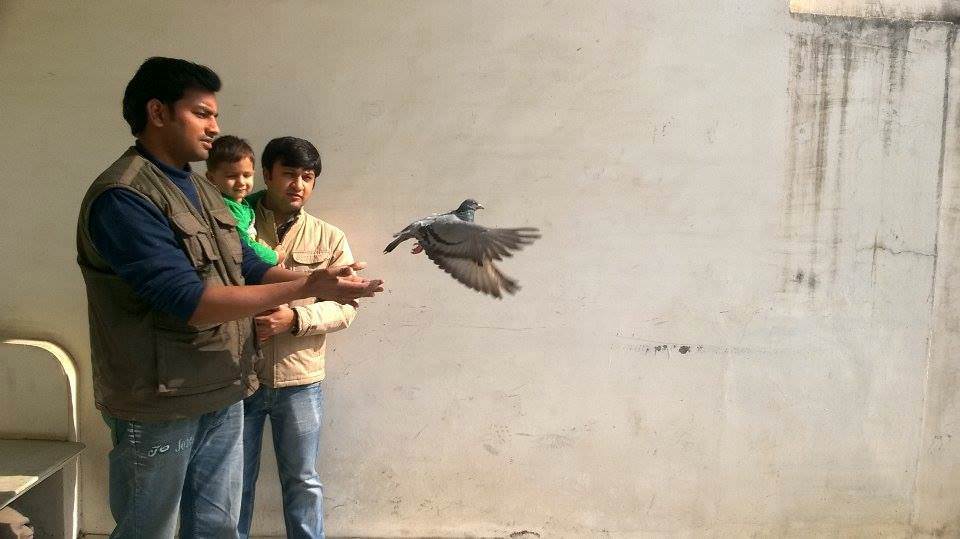 A Raksha volunteer releasing a rescued and recovered bird
A few months later, he was going to his shop with a friend when he saw a crowd on the road. Curious, they went to investigate. The crowd was in a frenzy, and cautioned the newcomers to stay away. “Kha jayega!” It will eat you, they screamed.
Something moving had been set on fire by the ring of panicked people. Before he could think, Rohit doused the fire. And saw that it was a snake, which was now lifeless. How could they burn a living creature alive, he wondered.
“It was a beautiful Royal Snake. Orange with black spots on it, non-venomous and completely harmless. Left on its own, it would not have harmed any one and quietly slithered away,” he reflects.
Royal snake - a harmless species found near Jaipur
When people know more, they fear less
To prevent ignorance that causes these extreme, violent reactions to snakes, Rohit organises frequent awareness camps and rescue missions in Jaipur. Participants are taught to identify snakes and the right way to help a trapped snake find it's way a back. “A snake will move around at night searching for prey or warm crevices. They don't attract attention in the dark and begin to think that they are safe and camouflaged. But when the day comes, they are spotted and panic starts, especially if it is a large snake,” says Rohit.
Rohit recommends blocking the snake's escape and calling experts to rescue it.
Releasing a nocturnal species
Besides awareness programmes, Raksha rescues approximately 400 snakes every year, with a peak near the monsoon, when they become active.
The jewel of our eco-systems
Snakes are very important to a thriving, healthy ecology. They help farmers by preying on pests and rodents. When a snake is removed from an eco-system it goes out of balance leading to pestilence. They are also useful as prey, being food for many birds, mammals and other snakes.
In fact, Rohit emphasises, no snake species poses a threat to humans because they are shy creatures that would rather escape than confront. “Often, when we are called to rescue a snake, it has moved far away by the time we get there. They want to avoid interactions as far as possible,” he says.

The next few months crucial
Human and snake interaction sees a peak in the summer and monsoons because this is the time snakes are most active. They want to eat food, mate and prepare for the winter. The time to show people what to do if they find a snake is now.
Team Raksha is raising funds to prepare for the coming season and rescue as many snakes as possible. They are also planning to do a social media campaign and a pilot snake-bite management programme in two villagesin Rajasthan. Rohit is working towards finding the best interventions and helping the country save its wildlife.
You can be a part of the good work and contribute here.
Click here to contact the organiser.

This rainy season Raksha is gearing up to rescue 400 snakes. Your contribution can let one more...