A trip to Shishu Mandir | Milaap

You are sending a message to
Shishu Mandir
Go back

A trip to Shishu Mandir

By Vishnu Rao
21 April, 2016
Shares
Share on Whatsapp
A few weeks back, I visited Shishu Mandir in Hella Nagar. Hella Nagar is named so after the founder of Shishu Mandir, Hella Mundhra. In recognition of her services to the local community, the Panchayat decided to name the village after her. The first person I met in Shishu Mandir was the ever-smiling director Anand sir. A veteran in social service, I could see the pride in his face when he spoke to me about his children and his school. Every single child in the school spoke fluent English. Every conversation, both between children or between children and teachers was in English.
“The two unique aspects of our school are that everyone speaks English on a daily basis right from age 4, and that we have a boy girl ratio of 30:70,” he said. He then went on to explain why these two aspects were so important to the school. He told me about the ground realities of the children’s backgrounds through stories and events he encountered.

Most children in this school come from the lower socio-economic strata of the society, all familiar with abuse and alcoholism. More than 60% of the children in the school have no fathers, who often die early because of alcoholism. Most children come from broken families with the father either dead or purposeless because of alcohol addiction. In some cases, one parent, usually the mother needs to get involved in activities on the fringes of law.
One child even saw her father set fire to her mother, causing her to burn to death.At this point, Anand sir's voice breaks with emotion. But with pride, he adds that the child has lived through the trauma and is studying plus two in Christ College, doing very well.
All children in the school are from the villages and slums around the school. The school firmly believes in the ripple effect of education. Educate one child,thereby educating a family. Which is why per family, only one child is selected for this intensive, quality education. For the other children in the family,they use the RTE act to get them enrolled in another good school in the vicinity.

Since the performance of the children in school is heavily dependent on the environment back home, they have also established women’s groups and a support system to sensitize and help the parents.
I was introduced to two vivacious girls, Visalakshi and Vivilya, who were part of the'Aspire' program by KPMG. “These are the girls spoilt by KPMG,” Anand sir joked. They were to be the ones who were to be my guides in the school.Brimming with confidence, they explained different aspects of life at Shishu Mandir, the serious and the quirky parts.

I saw the new labs, the basketball court, music rooms, social studies labs, and the library. They took me into classes and let me take photos. For classes with teachers in them, I took serious photos. For classes with no teachers in them,all the children made funny faces for the camera. The facilities are impressive, much better than most private schools in fact. There were 22 teachers for 250 children, the highest student teacher ratio I have ever seen.


Next, I asked Vivilya to take me to her favourite teacher. This turned out to be her English teacher, Ms Meena who was also the vice-principal. As I entered the room I saw a massive cabinet filled with trophies of all sizes. “State and National trophies in Basketball and Football won by both girls and boys over the past years,” Vivilya pointed out. I congratulated the English teacher on her efforts as I could clearly see the results in my interactions with the students. She thanked me and admitted that it was the result of a combined effort by all the teachers in the school, not just her. I heard more stories of the students from her.A lot of students seem to go to her with their problems. She told me about students who excelled in their careers despite coming from severely limiting backgrounds.The one that personally moved me most was hearing about a girl whose father killed himself and whose mother became a prostitute. Today, this girl is a confident woman doing BTech. in Bangalore.The biggest problem most children faced, she told me, was that their parents did not understand the value of a good education. Children perform best when encouraged by their parents. Good education empowers children to make their own choices and improve the lives of not only their own family but also future generations.As I said goodbye to her, a child walked in with tears in her eyes to talk to Meena Ma'am. 'Impact' is what came to my mind. As a teacher, she gives children the confidence to confide in her. She takes up their issues, finds a solution and in the bargain helps them move towards a habit of hope.

Hella´s vision for Shishu continues to determine the path for the organisation. She insists that the children´s inner growth remains the primary focus of the organisation. All activities and initiatives must ensure that the children receive comprehensive support from the Home and School. Hella´s dream is of a Shishu Family where children can learn and grow without fear and insecurities.Equally important are qualities of honesty, self-respect, responsibility and integrity. These are the foundations on which Shishu Mandir has been built. 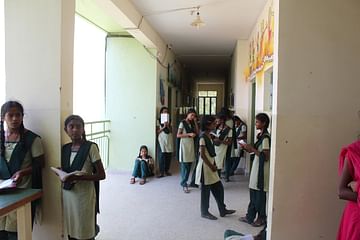