This Father Cycles Door To Door, Begging People To Save His Daughter From Cancer | Milaap
loans added to your basket
Total : 0
Pay Now

This Father Cycles Door To Door, Begging People To Save His Daughter From Cancer 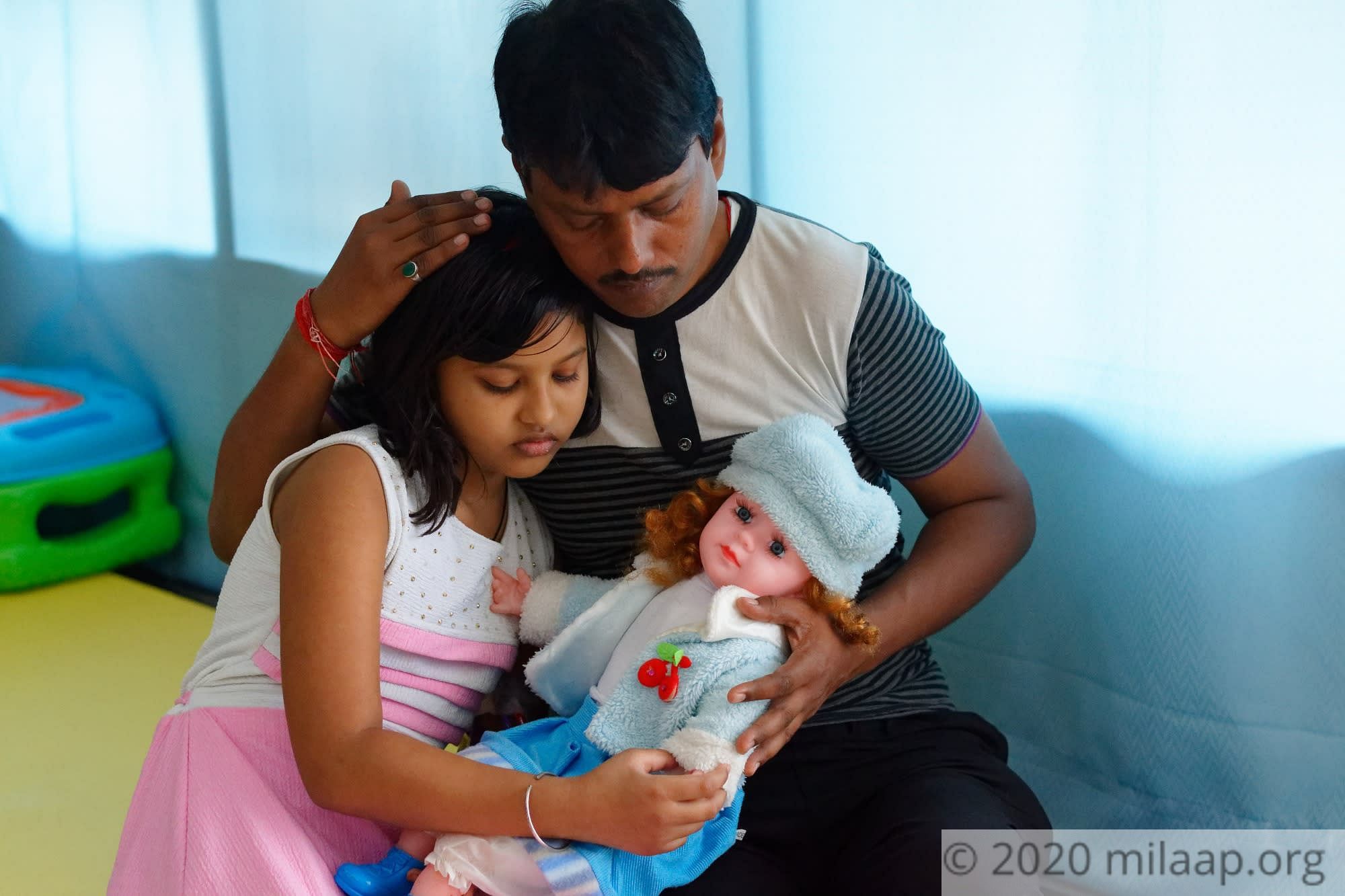 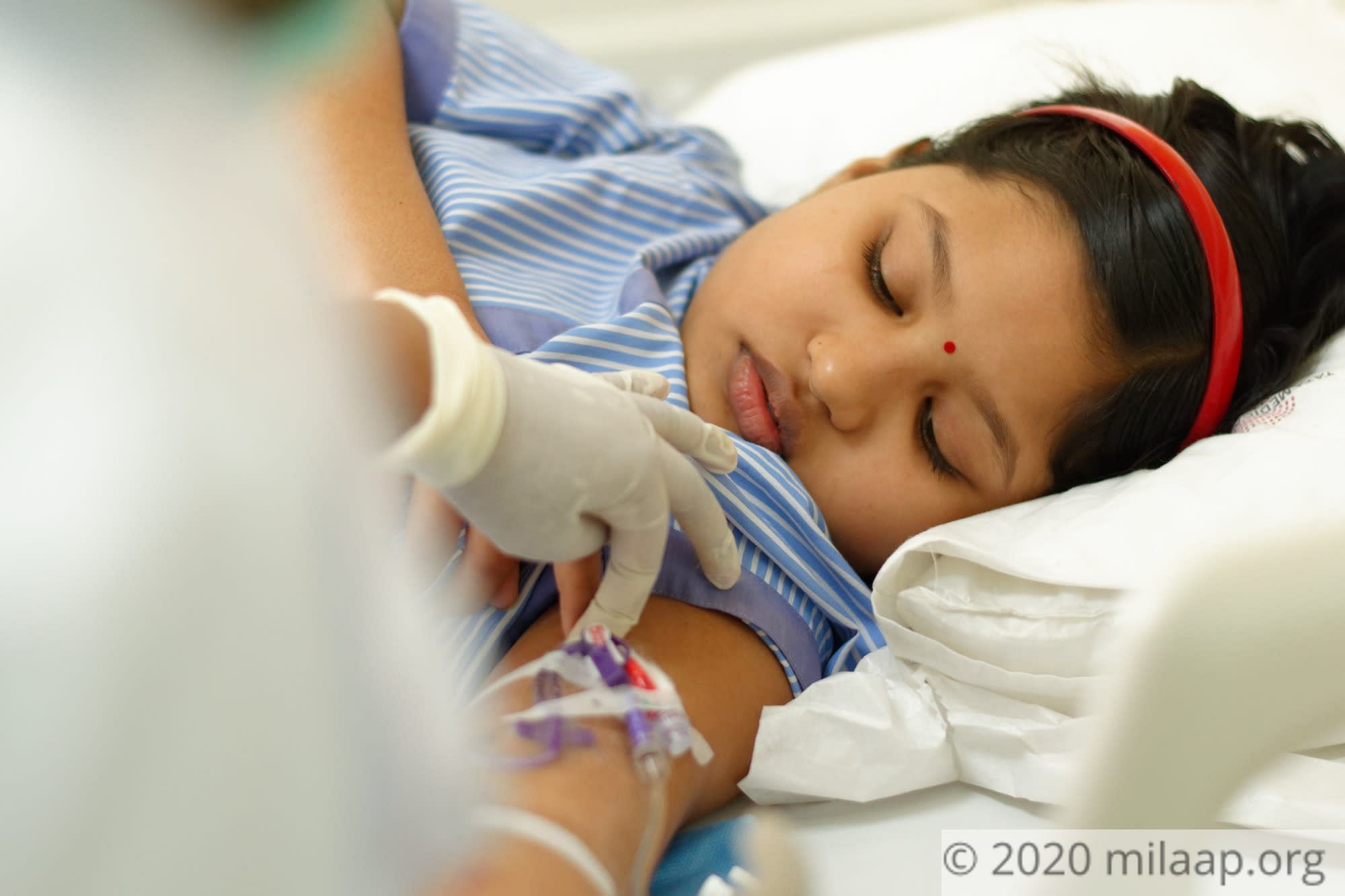 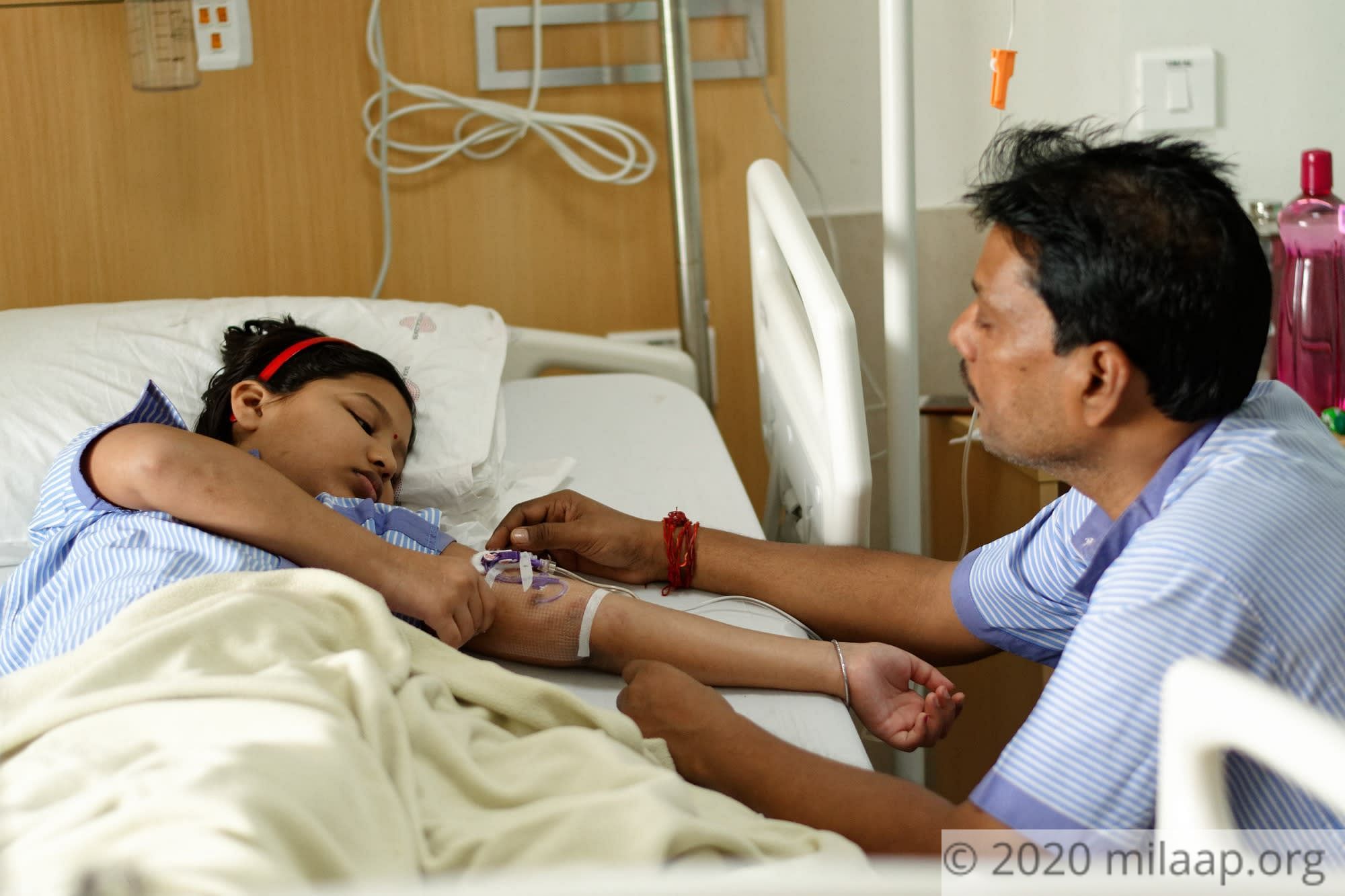 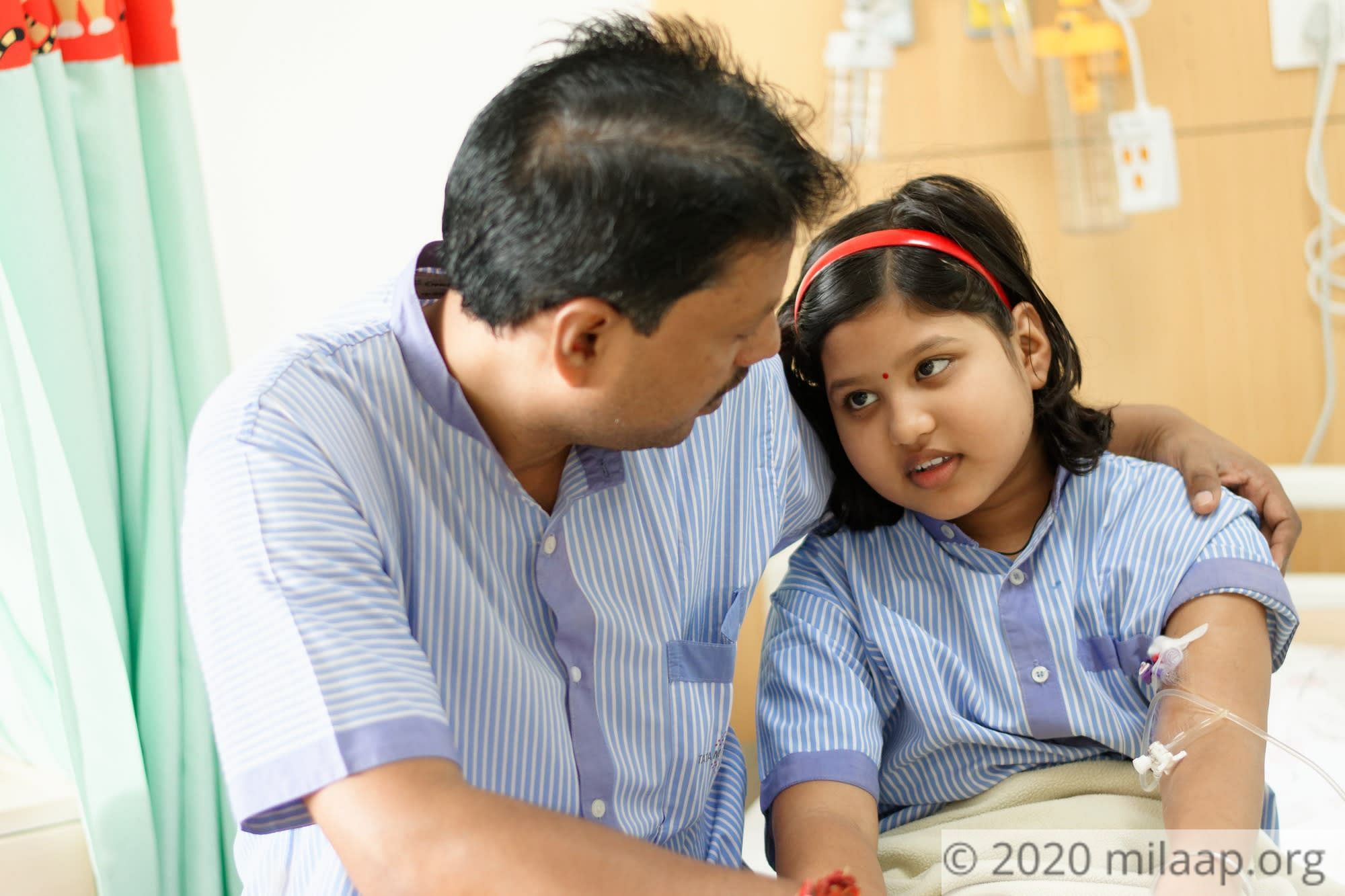 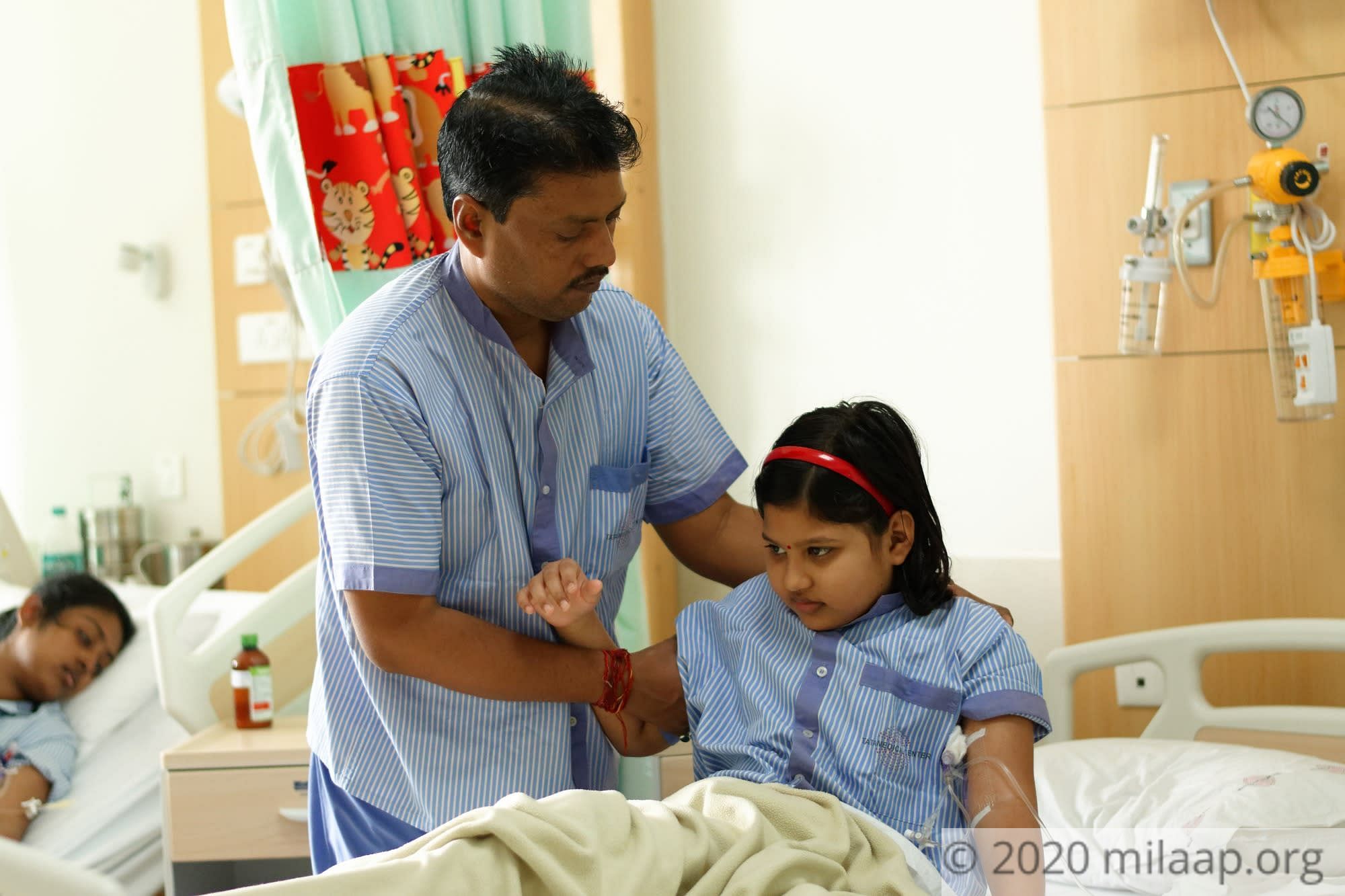 "Vaishnavi was just 6 when her life changed - for the worse. The whole night she used to scream in pain, without a second of relief. Even the injections were not helping. We couldn’t understand what was happening. For 2 months, cancer was spreading inside her body and we could not do anything about it. Now her father is begging strangers for help but...I am scared that we won't be able to save her.”- Gouri, mother.

Shivanandan and Santoshi knew they can’t delay her treatment anymore so they took their savings and came to Kolkata from Jharkhand for Vaishnavi’s treatment. It took 15 lakhs for them to finally be able to complete her treatment and rid her from cancer. They spent every penny they had to save her - and they did save her once. But all their efforts went in vain when after just 5 months her cancer relapsed.

Why does everyone lie to me? I want to go home

Just when she was recovering, destiny had other plans for her. Since the age of 6, Vaishnavi has only seen a life full of medicines and injections - everything reminding her of brutal pain. She is 10 years old now but instead of classrooms she only visits the hospital.

“I don’t like anything here. When I have to take those injections, I feel like ripping the pillows because it pains so much. Last time, the doctor uncle told me that I will not have to come back here but he lied to me. Even Ma-Baba lie to me, they tell me every day they will take me home tomorrow but they never take me back.” - Vaishnavi (10)

Shivanandan is the sole earning member in his family of 6. He sold his land and his wife's jewellery on Vaishnavi’s treatment in 2015. He used to make about Rs.6,000 selling clothes on his cycle, daily going from house to house. Now he uses that same cycle going door to door, begging people to contribute something for his daughter’s treatment. Nobody was willing to give him a loan because he still hasn’t repaid the amount taken in 2015 for Vaishnavi’s chemotherapy. After all this, he still needs Rs.10 lakhs more to save her.

Their own daughter doesn't recognise them - calls them 'uncle' and 'aunty'

When Vaishnavi’s cancer was detected, her younger sister was only a year old. Everyone told them not to take her near Vaishnavi so they had no option but to leave her at their sister’s place. Even their sons are staying at their grandmother’s place.

“Our younger daughter still calls us ‘Uncle and Aunty’ when we visit her at my sister’s place. My youngest son is 1 now and I was not even there when he started crawling or spoke his first words. Since their birth, Vaishnavi has only been in the hospital. Now if we can’t save Vaishnavi they will not even have any memory of their sister. My heart breaks because even after having my own kids I’m unable to give them the love they need at such a young age,” - Gouri, mother

Vaishnavi needs another year of chemotherapy and radiotherapy to recover from blood cancer. After exhausting everything they had, they need our support to get their daughter back home happy and healthy. Only you can save Vaishnavi. 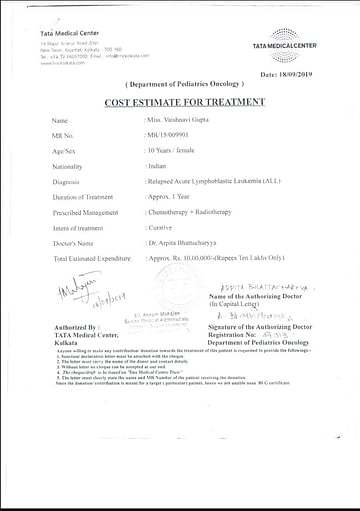 Click here to know more about Vaishnavi Gupta
Donate now
OR
Click here to read the instructions before you make a bank transfer.

I PRAY GOD FOR YOUR GOOD HEALTH BY SPEEDY RECOVERY

Wish you good luck and blessing.

I PRAY GOD FOR YOUR GOOD HEALTH BY SPEEDY RECOVERY

I strongly believe that Vaishnavi will be cured, I will pray for him from bottom of my heart.