They Have Nothing Left Except Her, And She's Slipping Away | Milaap

They Have Nothing Left Except Her, And She's Slipping Away Too 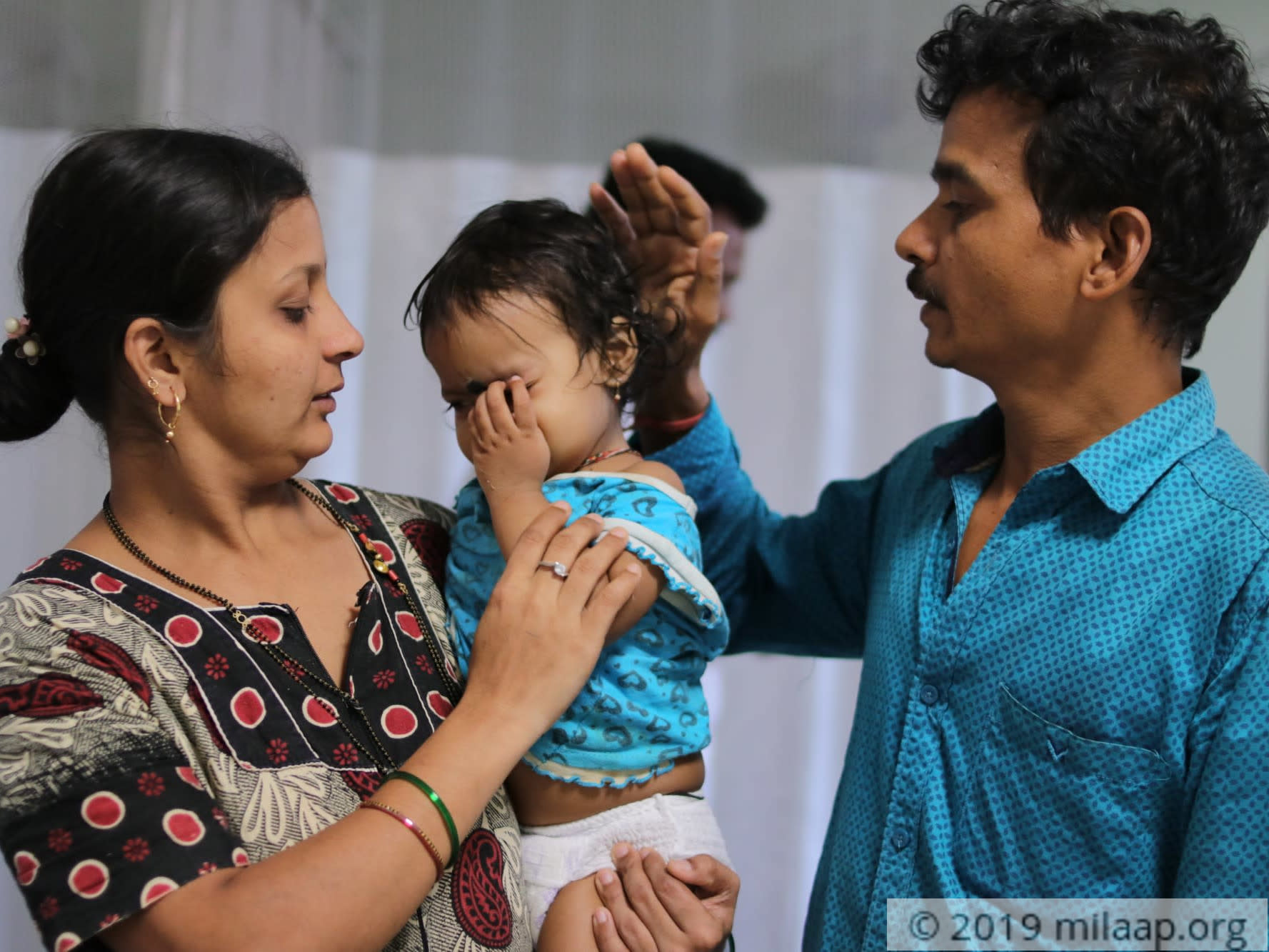 Three months after baby Sriraksha was born, Ashwini returned from her maternal house with the baby . There was a contrasting difference between the old and the new environment. Girish and Ashwini live in a house with Asbestos (cement) sheet for a roof, and cement coating for the floor. The house is cold, and is surrounded by stacked dung and an overgrowth of plants. Sriraksha was an active and a healthy baby, initially. But 6 months later, her health began to deteriorate, and their nightmares began.

At 9 months, she suffered endless cough, cold and fever

It was winter, and there were heavy rains. Sriraksha caught a severe cold, and was struck with a fever. She stopped eating, and was no longer active. She was getting weaker as days passed.

“Her fever was high. She had a lot of phlegm within and would cough continuously. When we took her to the doctors, they got her admitted. It was an infection, but we did not know what!  Just as we thought her fever was subsiding, she suffered from vomiting and dysentery! After 6 days of treatment, she was back to normal and we were relieved. But that wasn’t the end of it…it was just the beginning of an endless suffering for her” – Girish, father

She got high fever again but this time, the fever kept returning despite the medication. The doctors, they changed the medicines, tried everything but none of the treatments helped.

"They told us whatever she had, was very fatal. With no knowledge about her illness, running here and there was immensely torturous for us!” – Ashwini, mother.

“While she was admitted, her stomach began to swell and scans revealed her liver was infected. She had Hepatitis. When we’re still grieving about that, we were told that wasn’t all…. She was diagnosed with Hemophagocytic Lymphohistiocytosis! It took us days to even get the name right. We still don't understand clearly, what it does. How could she have contracted such a complex sickness?” – Girish.

Hemophagocytic lymphohistiocytosis is a rare disease of the immune system. It is a condition where the body produces too many immune cells that end up attacking internal organs such as the bone marrow, brain or liver. She requires  a prolonged immunosuppressive therapy, amongst other medication and that’ll cost them Rs. 6 Lakhs.

How will a tailor like me arrange such a huge amount?

Girish works as a tailor, most of what he earns goes in paying rent for the house and the shop. He’s left with no more than Rs. 8,000 a month to run a family of four. He has borrowed about 2 lakhs from friends and families, and managed the expenses so far.

“We have nothing called ours. If we had, I would have sold them all, without thinking twice, and arranged for funds! I don’t know where to get so much money from! ” – Girish.

The parents have done everything in their strength to save their little girl and have no way forward. Your contribution can help save her.
S
Patient Sriraksha is 1 month old, living in Bengaluru, Karnataka
AC
Being treated by Dr.Sudheer in Aster CMI Hospital, Bengaluru, Karnataka