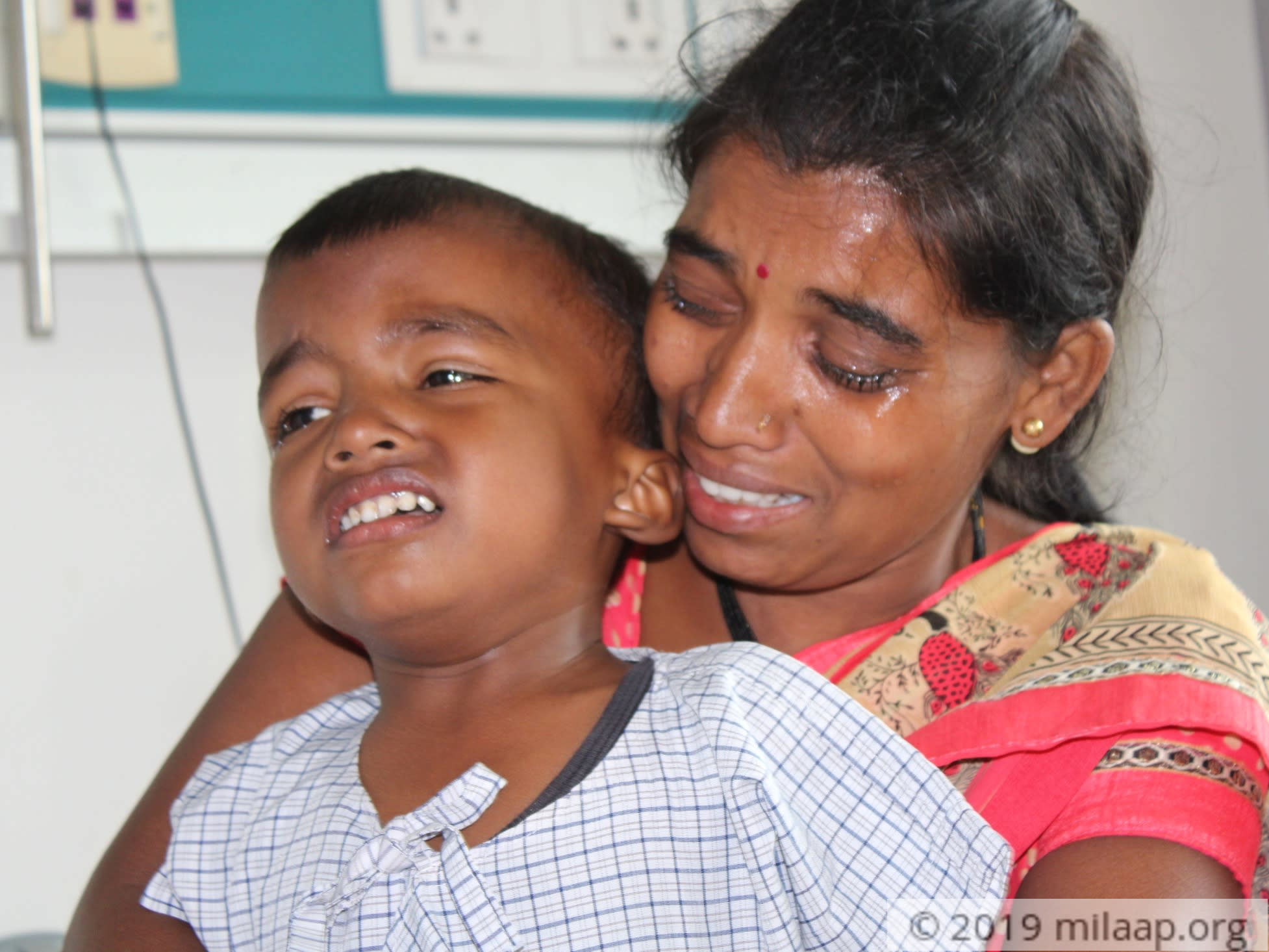 Share
“Two months ago, when the flood struck our village, we fled to a neighbouring one for shelter. We lost everything from our house, but that didn’t matter to us. We were afraid of losing our 5-year-old. It had been 6 days past Saksham’s blood-transfusion date! Every passing minute, we lived fearing the worst… This has been our life, for the past 5 years!” – Sunita, mother.

His struggle to stay alive started at just 6 months

When little Saksham was only 6 months old, Sunita and Dashrath were told the baby did not have enough blood. A week later, he was diagnosed with thalassemia major – a blood disorder in which there are abnormally few red blood cells. At that time, they had little idea how the disease would change their lives. The farmers are helpless and tired now, but they refuse to give up on their son. Saksham's 8-year-old brother and donor, Nihar, is determined to save him as well. He feels proud that only he has the "superpower" to save his brother's life.

“We only went for a check-up, but my son was admitted for a week and underwent an urgent blood transfusion. I sat there crying, watching him cry in pain. Just when I was starting to think it will soon be over, we were told that he’d need these transfusions every month. It wasn’t a one-time thing. He used to be such a happy baby. Now, he's 6 years old, and he just sits lifelessly, too weak to even lift his head. He cries and refuses to eat. I can’t see him like this!” – Sunita

Every month, the couple fights their own battles to get blood for Saksham's transfusion

Sunita and Dashrath live in a small village in Maharashtra. They travel hundreds of kilometers by bus, to get to the hospital every month. Owing to the distance and transport, there are unavoidable circumstances when the transfusion is delayed and the parents grieve over the condition of their son as he weakens.

“There have been times when there was no blood. I would rush from one bank to another in desperate hope, for days together, while Saksham got weaker and weaker…” – Dashrath, father

After years of transfusion, considering the risks involved in monthly transfusions, a cure has been suggested. A bone marrow transplant at the earliest is the only solution to his sickness. It will cost them 15 lakh rupees.

“When we go to the farm, Nihar takes care of Saksham. Just one word from Saksham, Nihar does it for him, tirelessly. Ever since he told Saksham about the transplant, he has been telling our relatives that his brother is going to give him magical blood that will make his disease go! We feel helpless, because we can’t afford it…” – Sunita

Living in a mud-house, that gets flooded at the lightest of showers, they have no hopes of affording the transplant

Dashrath is a farmer who works in others’ farms for daily wages. He earns no more than Rs. 6,000 a month, most of which he spends on Saksham’s transfusion. Left with nobody to borrow money from, they’re in misery.

“For as long as we are here, we can make sure he gets a transfusion every month, even if it means us starving. But what if something were to happen to us? This transplant is his only way out of his everyday struggle. But we can’t afford it, not even in our dreams…”

The parents have been through hardships to afford their son's treatment all this while. Now, it's beyond them. Your generous contribution can help them.
S
Patient Saksham is 5 years old, living in Bengaluru, Karnataka
AC
Being treated by Dr.C.P.Raghuram in Aster CMI Hospital, Bengaluru, Karnataka