Pabitra Who Has Survived A Critical Brain Tumor Needs Your Help To Return Home | Milaap
loans added to your basket
Total : 0
Pay Now

Shares
Shares
Share on whatsapp
Pabitra was suffering from a severe headache for years. What he thought as eye power fluctuation turned out to be a brain tumor. It had the potential of making him blind completely.
It’s been long since Pabitra was suffering from a terrible headache. He always ignored it thinking that it might be because of work stress. Pabitra is from a small village in Maldah district of West Bengal. He had to work very hard as a carpenter to make both ends meet.

Pabitra’s headache started to intensify with time. He even started vomiting. His condition was so bad that he had to leave his job. It was at that time his father forced him to go to the hospital. After an initial checkup, the doctors came to the conclusion that there is a tumor in his brain. The doctors even said that his condition is quite serious and needs to be treated immediately. There are no proper medical facilities in Maldah so Ashok took a firm decision to bring his son to Bangalore for treatment.

"I had no idea of Bangalore. I didn’t even know which hospital to go for treatment. I just wanted my son to survive. People in my village suggested me to go to Bangalore so I brought him here."

They stayed in a hotel in Bangalore for few days. They went to the hospital suggested by fellow travelers. After the preliminary test doctors here suggested him to get his tumor operated at the earliest. They had already exhausted all the resources. Pabitra’s father had to even leave the room he had rented and was forced to stay in the hospital.
Pabitra is married and has a small kid.In spite of his responsibilities, he had to leave his job for his disease. Now his old father and mother work very hard to feed the entire family. They have to work for the entire day to get Rs.350 as wage. Pabitra is the only son of the family. Ashoke is scared that he will not be able to work for long because of his age. If his son doesn’t get well soon and join work the entire family will die of hunger.

"I feel bad for my grandson. With no fault, he is suffering so much. I want my son to regain his health and return back to the village as soon as possible. The whole family is waiting for him."

Pabitra’s condition was very critical. Without an urgent surgery, he could have lost his vision completely. So the doctors went ahead with the surgery in spite of the scarcity of funds. Pabitra’s condition is improving.But his father is finding it very difficult to arrange funds to repay the hospital bills.
They have spent Rs.40,000 so far for which they had to even sell the little gold that they had. Now there is nothing left in the house that can be sold. None of their relatives are in a condition to help them. Pabitra needs 1.8 Lakhs to settle all his medical bills and go back home.

You are the only ray of hope for the family. Your contribution can help Pabitra settle his hospital bills and go back home to his family. His son is waiting for him. Only your help can reunite this family.
The specifics of this case have been verified by the medical team at the concerned hospital. For any clarification on the treatment or associated costs, contact the campaign organiser or the medical team.
Click Here To Help Pabitra
Donate 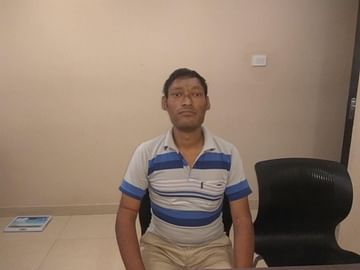