8 Surgeries Have Scarred 7-Year-Old Nithin, He Cries In Fear Every Time He's In The Hospital | Milaap
loans added to your basket
Total : 0
Pay Now

8 Surgeries Have Scarred 7-Year-Old Nithin, He Cries In Fear Every Time He's In The Hospital

Shares
Shares
Share on whatsapp
Eight surgeries have left marks and scars all over his legs, and every time Nithin sees the hospital he shrieks like he has seen a nightmare. “Soon after his birth, the doctors put plaster around his tiny legs, up to his hips. Ever since then, it feels like we've never left the hospital at all,” says Nithin’s mother, Shruti. Nithin’s surgeries surpassed his number of birthdays, having had 8 surgeries so far, while he is only 7-years-old, and the doctors plan another surgery very soon.

The disorder can cripple him for life

Nithin suffers from a congenital disorder, a disease that Nithin acquired before birth. This disease of bones and joints, or in Nithin’s case Bilateral Hip dislocation, might completely cripple him if corrective surgeries are not done. According to the doctors, the surgery will give him means to defy those deformations, or else as Nithin grows, so will the deformations, and so will the pain. His mobility will be affected permanently.

7-year-old Nithin cries out of pain and exhaustion

Nithin and his parents come from Shikaripura, in Shimoga, where his father works as a primary teacher, earning up to Rs. 10,000 per month. The family so far has already spent 7-8 lakhs on Nithin’s treatment, post-surgery care, conveyance and more. As I ask Shruti, how they were able to afford his surgeries so far, she put her hands to her head, saying, “We are in debt up to here.” Nithin’s father took loans from not just one person but various moneylenders to pay for these surgeries.

“I am always with Nithin and I am never too tired to take care of him, but I know this is not the life I had thought for him. I also know that Nithin himself has grown tired, and sometimes, when he cries I know it is not just out of pain, but out of exhaustion, and the dread of another surgery.”

Nithin looks like any other child, but the marks on his body are proof of his suffering

On the outside, Nithin is like any other child, as he looks out of the window from his hospital room. But the marks on his body are evidence to his pain. He loves to play but cannot for long. He cannot bend his legs completely, and any strain causes an unbearable pain for Nithin. Most nights Nithin cries in pain, being awake, dozing off at dawn. And Shruti has to always keep an eye on him, as he tends to fall often.


For this upcoming operation, the doctors plan to break his deformed bones and rejoin them again, followed by physiotherapy, that will look after his movements and help in a steady recovery. But this might not be all for Nithin, he still has a long way to go, and parents need to keep making tough choices for both him and their family. 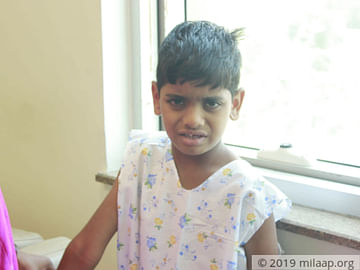 The Disorder Can Cripple Him For Life