At 1-Month She Almost Bled To Death, At 4-Months Her Rapidly Failing Liver Can Kill Her | Milaap
loans added to your basket
Total : 0
Pay Now

At 1-Month She Almost Bled To Death, At 4-Months Her Rapidly Failing Liver Can Kill Her 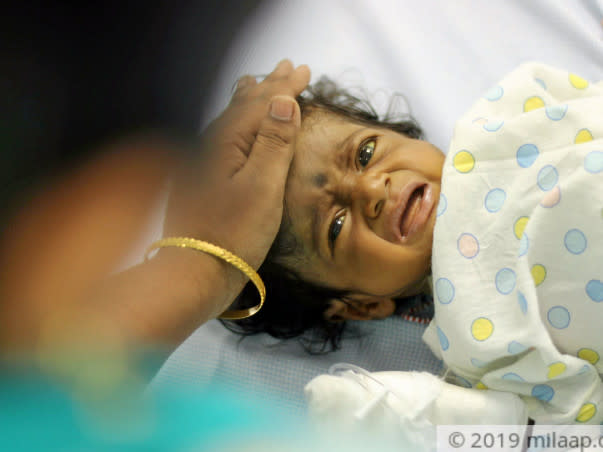 “This disease occurs in only 1 in every 15,000 infants. Why did my daughter have to be the one? Isn’t it unfair? At just 4 months, she’s battling death? “- Manigandan, father.

After getting his sister married, and settling his parents’ debts, Manigandan had finally begun to settle down. Blessed with a baby girl, the couple was overjoyed. But their happiness, and her laughter only lasted till she turned a month old when frightening symptoms started showing up.

When she was a month old, her umbilical cord started bleeding

"One day, her umbilical cord that should have dried and fallen off, tore open and started bleeding. I had never seen so much blood. It was like all the blood in her body was draining out. We thought we’d lose her! We rushed her to a nearby hospital and the doctors said it was only a case of Vitamin K deficiency. She needed transfusion. The treatment was a success, and we took her back home! But it was only the first of many such hospital visits…” – Manigandan.

A week after the transfusion, her condition worsened

Two days after being treated, baby Magizhini started bleeding from her genital area. The parents were horrified. But little did they have the time to think of a solution. Because, one after the other, newer and scarier symptoms showed up.


“When I saw her bleeding from down there, I couldn’t understand. It shocked me so much, I couldn’t even cry. Even as we were trying to understand what had happened, we saw her stomach gradually swelling up. While the rest of her body shrunk, her stomach bloated. She was all bones. Her stool was white in colour and her eyes, yellow. It all happened too soon!” – Mohanapriya, mother.

They searched on Google, to see what it meant. It said Biliary Atresia – a term they had never heard. They couldn't believe their baby had such a complicated disease.

Baby Magizhini was rushed to a different hospital and was diagnosed with Biliary Atresia – A condition where the bile flow from the liver to the gallbladder is blocked. The bile remains trapped in the liver, causing severe damage to the liver cells. Any further delay could have killed her.

“When we admitted her, the doctors said a liver transplant was the only solution for her condition. But there was no way we could arrange so much cash. We were then told about Kasai procedure – a surgery that  would prevent liver damage and thus buy us some time, while we arranged the funds. However, the surgery didn't work. Now only a liver transplant can save her.” – Manigandan.

The cost of her life is over 20 lakhs, and the parents can’t afford it

Manigandan works at an IT company and earns a decent amount. He’s also the donor for Magizhini. The baby’s condition is worsening but the surgery is on hold for the family is struggling to gather funds.

“She’s doing her bit by surviving despite all the torturous suffering. We are the ones failing to do our part!” – Mohana Priya

Just born, baby Magizhini has only seen the worst of life. Her parents are struggling to keep her alive so she too, like the other babies, gets to see the good in it. Your contribution can help!

Supporters
A
Anonymous A$1,000
G
GLOBALMONEYEXCHANG Rs.45,000
1851 others have contributed
Click here to know more about Magizhini Naachiyar

Donated to this campaign via Paytm? Click here if you can’t find your donation listed below.
A
Anonymous donated A$1,000
G
GLOBALMONEYEXCHANG donated Rs.45,000
RP
Rajasimhan donated $300

Hope she gets well soon... My prayers are with you and your family

Hi Mani Anna Devaraj from Ameex. We are praying Papa will be soon alright