As This 3-Year-Old Fights Death, Her Brother Is The Only One Who Can Save Her | Milaap
loans added to your basket
Total : 0
Pay Now

As This 3-Year-Old Fights Death, Her Brother Is The Only One Who Can Save Her 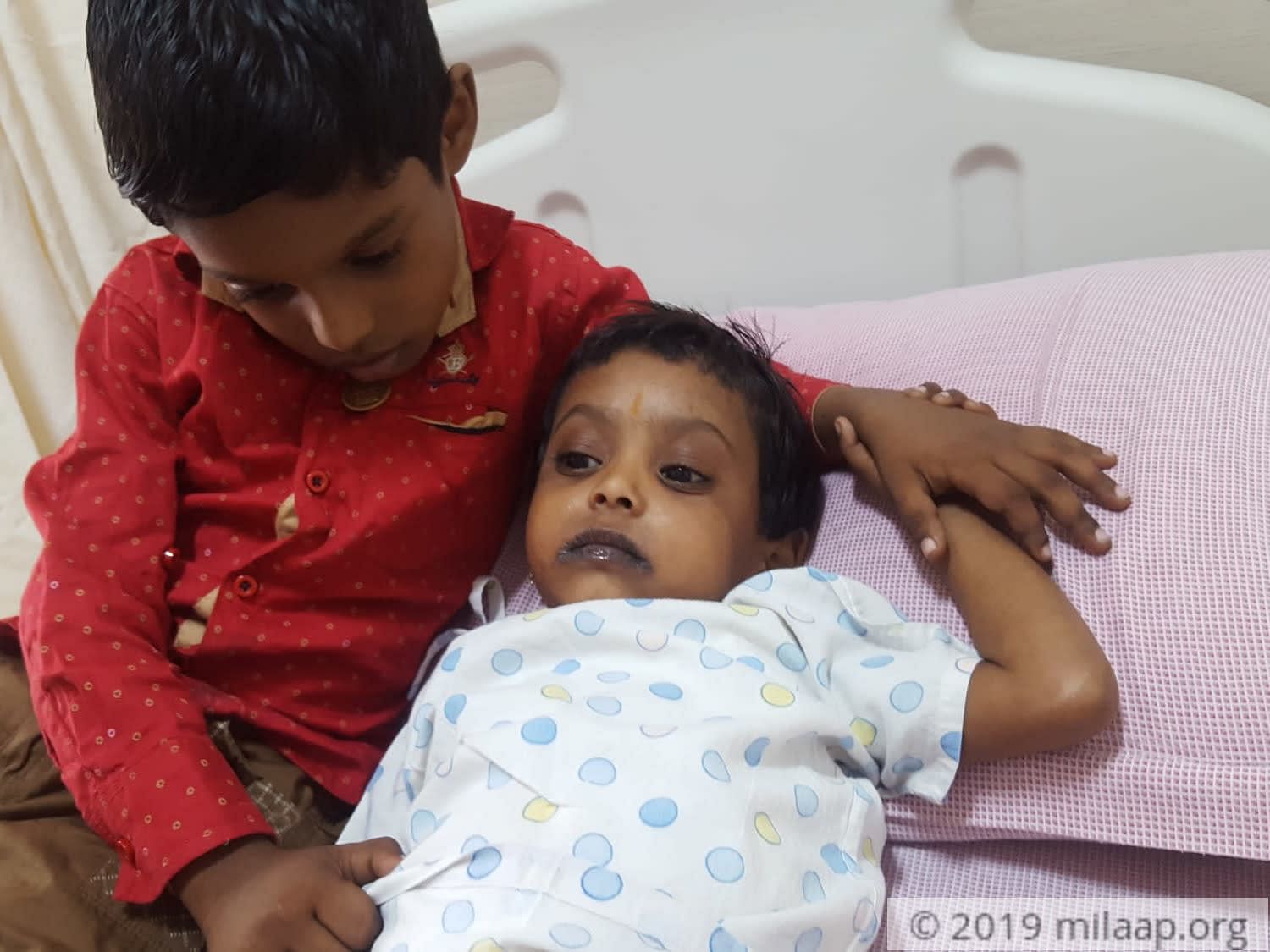 “It seems Dhanshika Paapa’s rashes will go if she gets new blood. I will give all my blood to her so she becomes fine.” - Harshavardhan, brother.

Harshavardhan, Dhanshika’s 5-year-old brother never let her go out of his sight. The two were always inseparable. When he went to school, she wore a bag like him and walked around in front of the gate. When he did his homework, she sat by him and scribbled on a piece of paper. She did everything he did, blindly following him; and he made sure she was always okay. Even now, when she is fighting death, her brother is the only one who can save her.

At 7 months, Dhanshika was diagnosed with Eczema, but that wasn’t it

Few months after she was born, Dhanshika got rashes on her cheeks. The doctors prescribed moisturizers and the rashes subsided, but never completely. But at 7 months, along with dysentery and vomiting, they showed up more severely and she was admitted in the hospital.


“She was in the hospital for 15 days and the dysentery stopped. But the rashes did not go. We took her to a dermatologist and they said she had a severe case of eczema. They said it was common and put her on medication. But we knew something wasn’t okay. Few months later, she had another attack of dysentery and this time the doctors said there was something wrong with her stomach. She was put on medication. She suffered so much. But it did not stop there!” – Anbarasu, father.

“Despite the treatment, her rashes never subsided. They were only suppressed by medication and came back when it was stopped. But another problem was, Dhanshika weighed no more than 5 kgs at 2 years of age. We were very worried. When we asked the doctors, they asked us to get a genetic test done and the reports shook us!” – Sumithra, mother.

3-year-old Dhanshika’s test results revealed that there’s a deletion of the DOCK 8 gene sequence in her DNA. The absence of this leads to a decrease in the functioning of the immune system. As a result, the person is more prone to viral, fungal and bacterial infections. This is why Dhanshika developed eczema, is underweight and falls sick frequently. With this disorder, she will not live for more than 2 years. The only cure is an immediate bone-marrow transplant.

“They told us that it is very rare that the HLA matches even considerably. But Harsha’s HLA was a 100% match and even the doctors were surprised at the occurrence. This really is a blessing. Somehow or the other, Harsha has always been there for his sister. It pains me that both my kids have to see all this so early in their lives. But there’s no other way to save her. We’ve told him they will prick a needle. He is more than willing to be of help – he doesn’t even know how a needle feels" – Anbarasu.

It's now or never for little Dhanshika

Anbarasu is the only working member of his family and earns a decent amount. The transplant and after-care costs 15 lakhs and the family is helpless. Ever since Dhanshika was diagnosed with eczema, the family has spent in lakhs and now when they most need it, they don’t have the funds.

“She has rashes all over her body and I don't want to imagine how it feels. She doesn't know what it is like, to have a normal life. ”

“My father is a barber in our village. After class 12, I got a B.E seat – a huge thing back in those days. But I couldn’t afford it, I had to let go. I worked at a medical shop for 2 years and saved up for my education. Then after all the years of struggle, I got placed in campus. This is how life has been for me. Did everything on my own - I don’t remember ever having been dependent. But now, I don’t have the luxury of time, neither any sources, have run out of savings too. It’s now or never for Dhanshika.” – Anbarasu.

They have no sources of funds and are in desperate need of help. You can help Harshavardhan save his little sister. 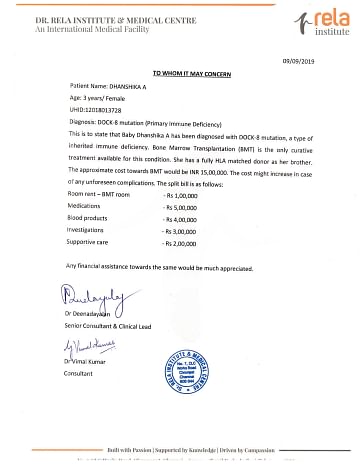 Click here to know more about Dhanshika
Donate now
OR
Click here to read the instructions before you make a bank transfer.

BY GOD GRACE , GET WELL SOON