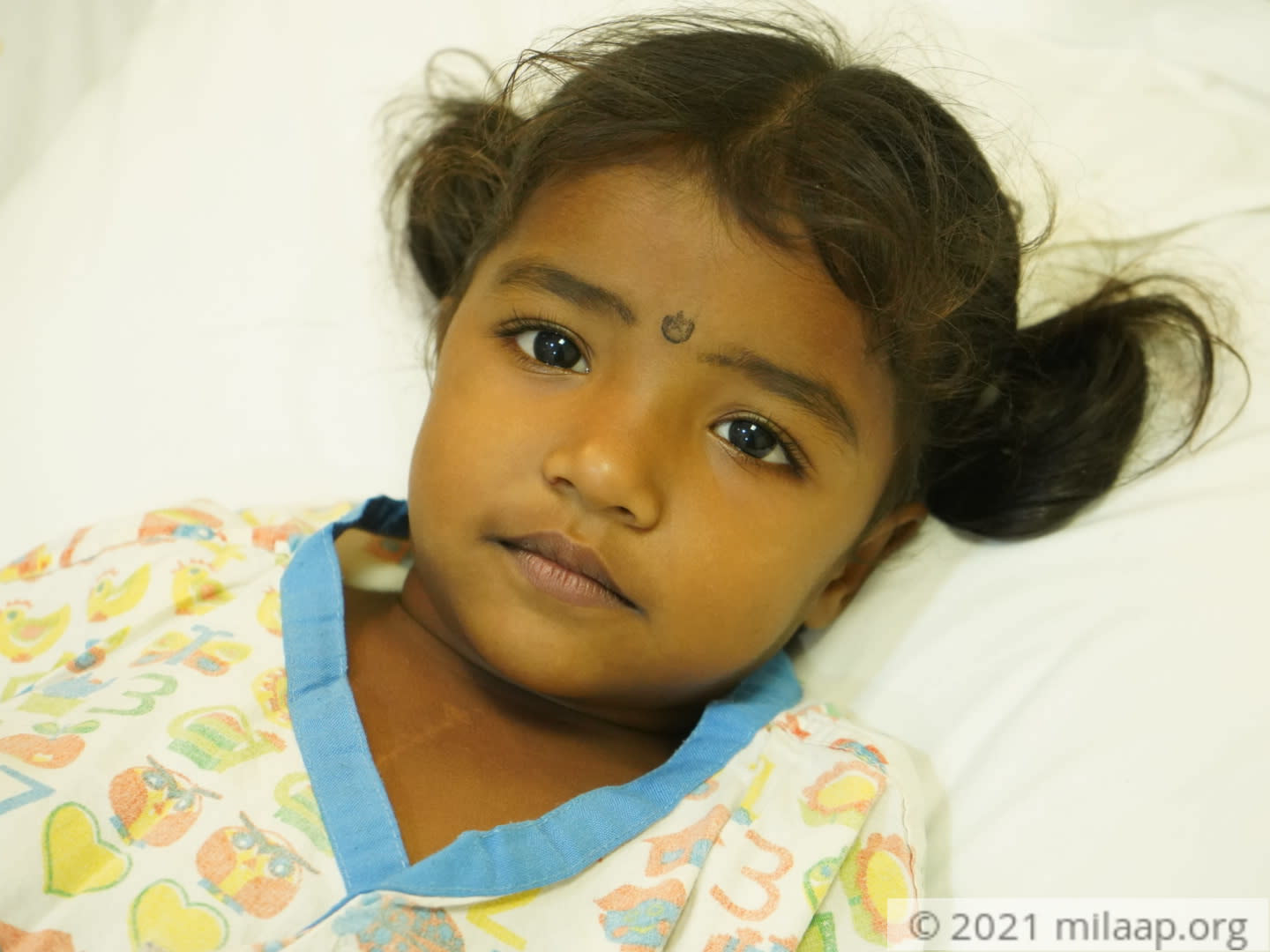 Share
Little Desilya has seen more pain in her 3 years than most of us will ever have in our lifetimes. Born with a hole in her heart, every single day was a struggle for her, till she underwent open-heart surgery that promised her a better life! But just a year later, her heart is failing her again! While kids her age are running around without a care, little Desilya has no energy to even breathe.
Sitting quietly in a corner of the construction site, she watches her parents, who are masons, spill sweat and blood to afford the surgery that can save her life.
But the 20 lakhs is too much for them. With help from you, she can be saved!

Born with a hole in her heart, Desilya winced each time she moved

Just two days after she was born, Desilya was diagnosed with a hole in her heart. She needed surgery, but her parents were also told she might not survive, despite it. Uneducated, confused, and afraid, her parents took her home and started treatment at a local hospital instead.

“Six months went by, and our baby started suffering from breathlessness. If she cried, she’d turn blue due to lack of oxygen. We’d struggle to keep her from crying. More time passed, and she just wasn't growing! She was weak and puny, for she hardly ate. She hadn’t even rolled over yet, and crawling was out of the question! When she accidentally rolled over, she'd get so breathless and wail inconsolably. She was just hanging on, it seemed to us…” – Manjula, mother.

She underwent open-heart surgery and life was good…they thought

She was 1.5 years old when one day her health deteriorated. She was rushed to the hospital and immediate surgery was recommended. It was a question of life or death. She underwent open-heart surgery to prevent the mixing of oxygenated blood with unoxygenated blood.

“It was 10am when she was taken for surgery. Till 7pm, we didn’t even know if she was alive! Every minute of that day was torturous. We were hoping against hope for her to be saved and, luckily, she made it! Life was good. She was slow to reach her milestones, but it was ok. At least she was alive!  But, just when we were beginning to relax, history repeated itself…” – Vijay Kumar.

Just weeks after she turned 3, she suffered a high fever. She was started on medication, but when she woke up the next day, her face, hands, and feet were all swollen.

“We thought it was because of an insect bite. We took her to the hospital where we were told her heart was giving up on her, yet again. Her valve was leaking, and that she wouldn’t survive without urgent surgery! We were devastated. She’d have to see so much pain all over again! She's not even joined school...and she's already fighting death for the second time! "– Manjula.

Urgent surgery can save her, but her parents don't have the money

Working as daily-wage labourers, the couple earns no more than INR 15,000 per month. In the past 2 weeks, they’ve sold all their jewellery and borrowed from everyone they knew. Yet, 50,000 rupees were all they could gather. Their child is fighting for life. Without help from you, she won’t make it. You can help.

A generous contribution from you can give this child a second chance at life. Click here to contribute.
DV
Patient Desilya V is 3 years old, living in Villupuram, Tamil Nadu
AC
Being treated in Apollo Cradle Maternity & Children's Hospital in Chennai, Chennai, Tamil Nadu