For 9 Years This Reporter's Son's Disease Was Undiagnosed, Now It's Killing Him | Milaap
loans added to your basket
Total : 0
Pay Now

GS
You are sending a message to
Gladys Stephan
Go back

For 9 Years This Reporter's Son's Disease Was Undiagnosed, Now It's Killing Him 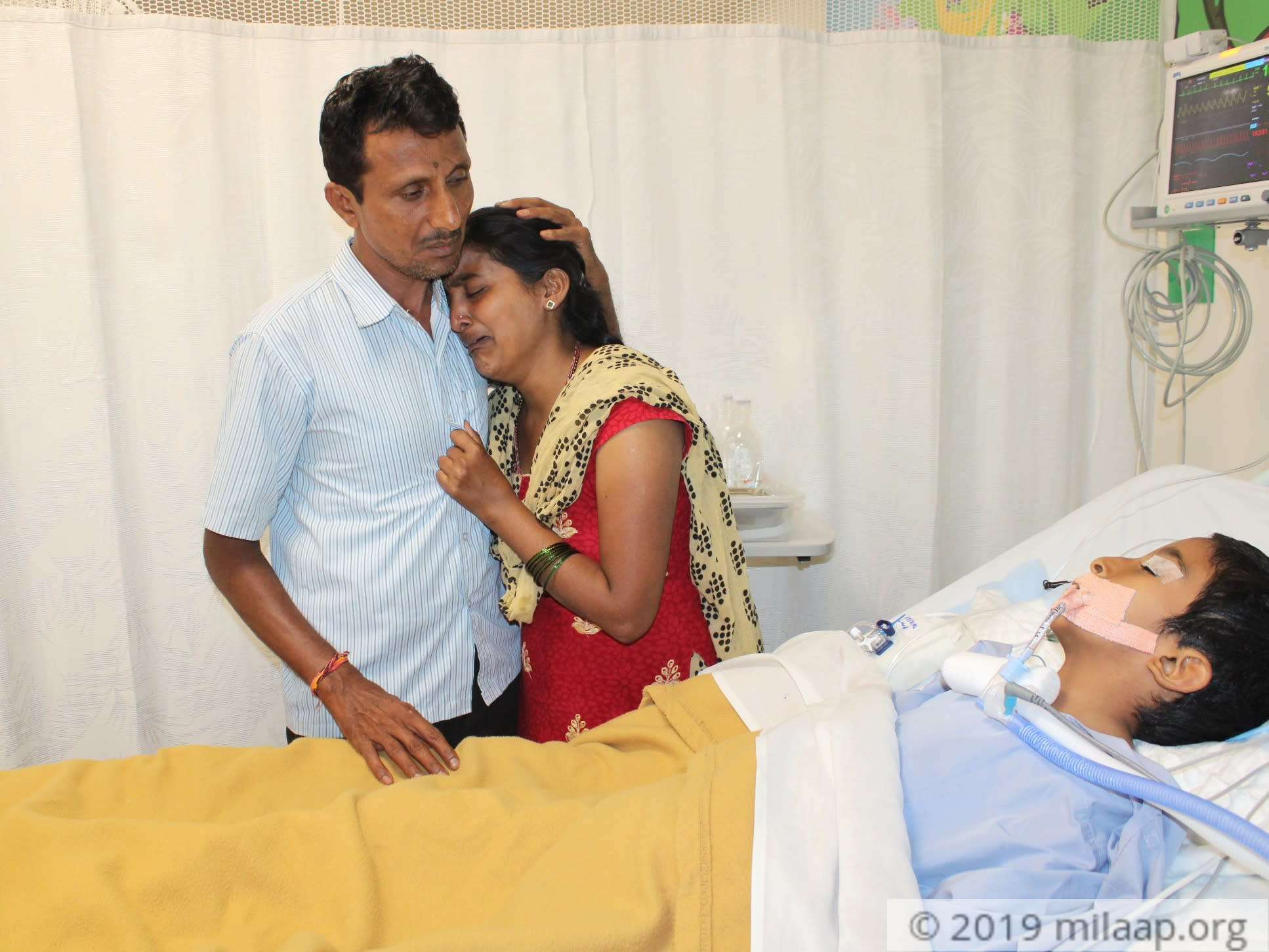 Share on facebook
Prema is devastated. She breaks down every time she enters the ICU and sees her only child, Deekshith lying unconscious. She calls out to him, begs him to wake up, but Deekshith doesn’t move. He doesn’t even open his eyes. It’s been 5 days. Devraj tries to take her out of the ICU, but Prema refuses to leave.  She holds on to her husband and tells him to wake their son up - it’s the most heartbreaking sight.

“This is a do or die situation for us. It feels like God is testing us…our strength. Deekshith is our strength, our everything. If I don’t do everything to save him now, we won’t get to take him home…alive.” – Devraj, father

For 9 years his condition was undiagnosed, now it’s killing him

Deekshith was born with a kidney problem – one kidney is smaller than the other. However, it was only 5 days ago that Devraj and Prema found out. For 9 years he lived with a condition that went undiagnosed, and now, it’s killing him. He is now in the ICU with kidney failure. He has a long road of recovery ahead of him, but Deekshith can make it if he stays in the ICU for longer.

Deekshith is a very bright student. He’s hardworking and determined, even though he’s just in class 4. The day he fell sick, he was studying for his mid-term exams. The last thing he told his parents was – I have to come first in class, no matter what. He went to bed after this.

“I went to check if he was sleeping and I saw him moving in bed. He had a high fever and by 3 am, he was vomiting even the little water we gave him. We took him to a nearby clinic where he had his first seizure. It was all downhill from there. We took him to so many hospitals. In the second hospital we took him to, he started getting violent, he hit anyone that tried to hold him down and started screaming. It was like he was possessed…this wasn’t our Deekshith.”

These were all signs that Deekshith’s condition was deteriorating, and rapidly. Devraj was determined not to give up.

It’s a matter of life and death, and they’re running out of time

With the little savings he had, Devraj managed to start Deekshith’s treatment. But the little one’s fight has only just begun. He needs to stay in the ICU for longer, but Devraj and Prema have nothing left now. Devraj works as a reporter for a Kannada- language newspaper called Vijayvani. Prema is a tuition teacher. Both their incomes aren’t enough to afford Deekshith’s treatment.

“We could never give him the best of everything, no matter how much we tried. We just don’t have the means. But we have to give the best of treatment, there is no other way. It’s a matter of life and death. He’s our only son…he’s our only hope…”

Prema stands outside the ICU door. She refuses to eat unless Devraj pleads her to. Devraj is trying to stay strong for his family. His son is fighting death, his wife is in shock and he has no money left after spending over 1 lakh.

286 others have contributed
Click here to know more about Deekshith

Praying for a speedy recovery.