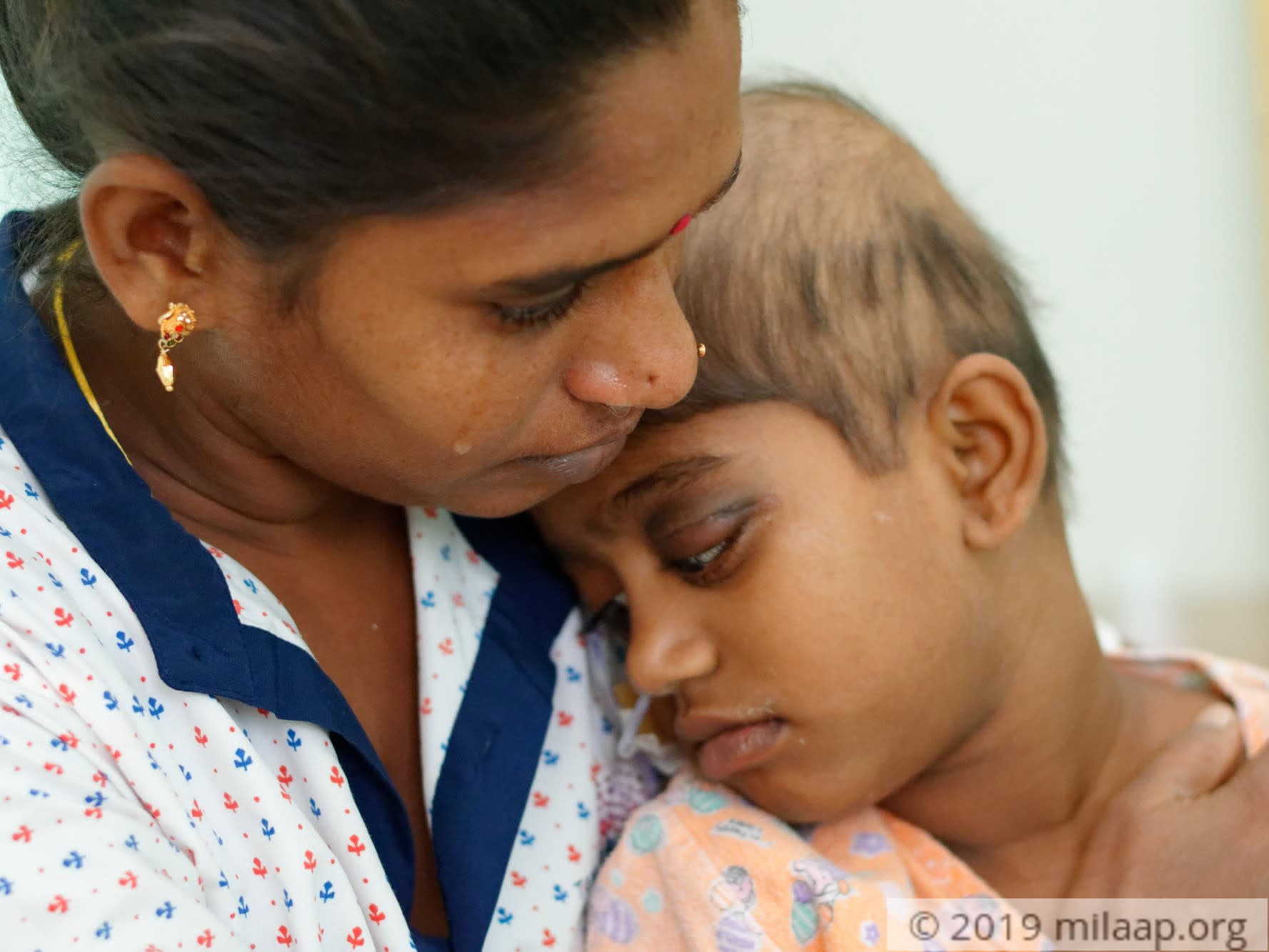 Share
"I have to be a father and mother to both my daughters. My husband never took any responsibility or contributed to raising my daughters. I have done everything on my own. Even now, as Lija fights such a deadly form of cancer, he hasn’t come forward to help in any way. I have to remain stronger than ever now, only for her. But the only work I could get was that of a cement labourer, but that’s not enough to save my Lija’s life. She’s slipping away from me…”
– Ishwari, mother

Her eyes started swelling, her eyes balls got dislodged – Ishwari was terrified

Everything was going fine till Lija had a slight swelling in her left eye. Even after using ointment, her left eye started protruding outwards. Gradually both her eyeballs got dislodged and Ishwari got really scared as she couldn't understand what was happening to her daughter. She took her to all the local hospitals in and around Odisha but nobody could detect for a month that it was actually a cancerous growth in her eye. It was almost after a month that her orbital Rhabdomyosarcoma got detected – a deadly form of eye cancer.

“In just a few days, she started looking so different. She was scared to even look in the mirror, but for one month no one could tell us what was happening or why it was happening. It’s cancer…my little girl has cancer and I have nothing to save her.”

Ishwari works very hard for her daughters. On some days, she leaves even before they can wake up. That’s the only way she can feed them, look after them. Without working long hours, there is no way she can support her family. But now, even that is not enough to afford Lija’s cancer treatment.

"Everyday I would wake up at 4 am and cook food for my daughters and leave for work seeing their faces. As a mother, I hated to leave the house for work even before they wake up. But what can I do? "-Ishwari, mother

Her husband abandoned them, he doesn’t even know which class his daughter studies in

Lija's father has shrugged off all his responsibilities and doesn't go to work. He lives off Ishwari's income of Rs.3500 per month. It's been 15 years of their marriage but he still doesn't know what class his daughters go to, let alone knowing what medicines Lija has to take at which time. He visits the hospital only when he pleases but even that is for a few minutes.

"My brothers have been supporting Lija's treatment till now as I have to be with Lija full time in the hospital and I'm unable to go to work.They have already spent 2 lakhs of their savings for me. But how much can they even support me when they have their own families to feed? My younger brother had to leave his work and be here with me since a month when it is Lija's father who should be taking this responsibility." - Ishwari, breaking down

Lija had to be admitted for shooting abdominal pain and blood in her stool. She requires urgent continued treatment of chemotherapy and radiotherapy to get back to her normal life. It has been months she has been confined only to the walls of hospitals and painful injections.


As a single mother, Ishwari just wants to give her daughters a life full of dignity, something that she never had. She had so many dreams for them for which she has been saving up. But with Lija's cancer diagnosis, she has spent every rupee she had. Every day she is losing the fight to save D.Lija due to no funds. A little help from your side can help this young mother save her younger daughter.
DL
Patient D. Lija is 10 years old, living in Kolkata, West Bengal
TM
Being treated by Dr. Reghu k s in Tata Medical Center, Kolkata, West Bengal