She Stopped Her Own Treatment So That Her Baby Can Survive | Milaap
loans added to your basket
Total : 0
Pay Now

You are sending a message to
tejsinghr
Go back

She Stopped Her Own Treatment So That Her Baby Can Survive 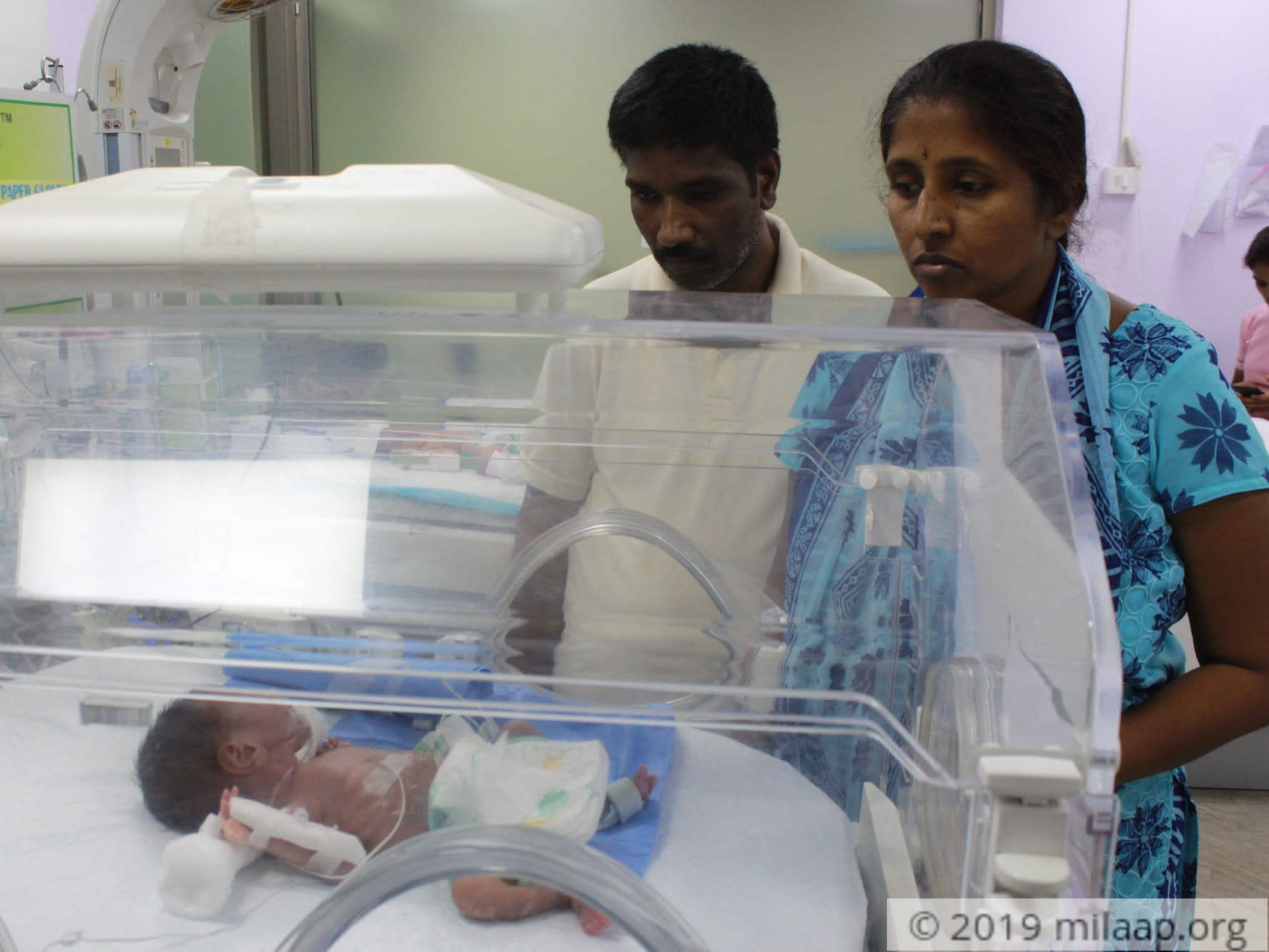 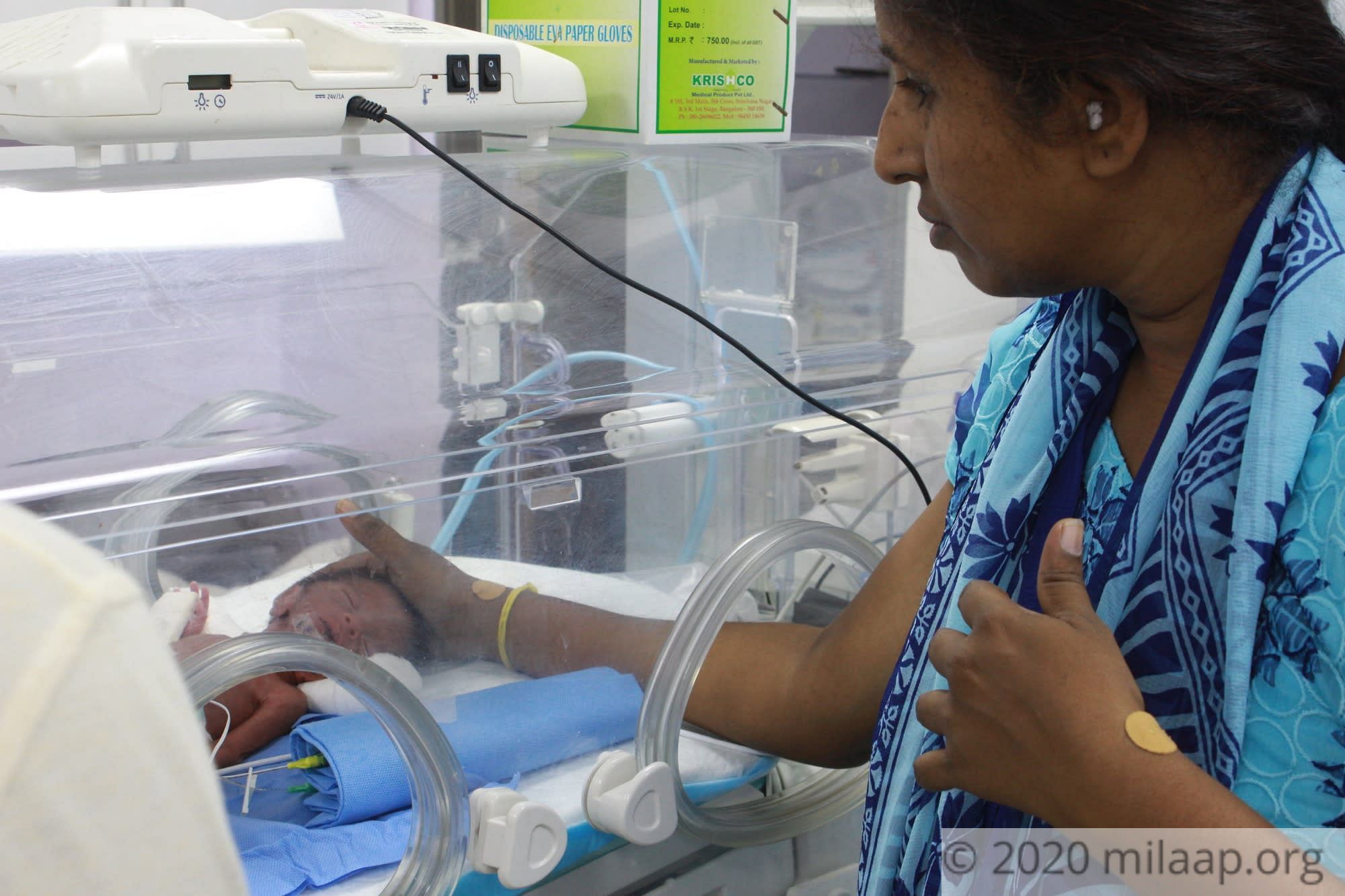 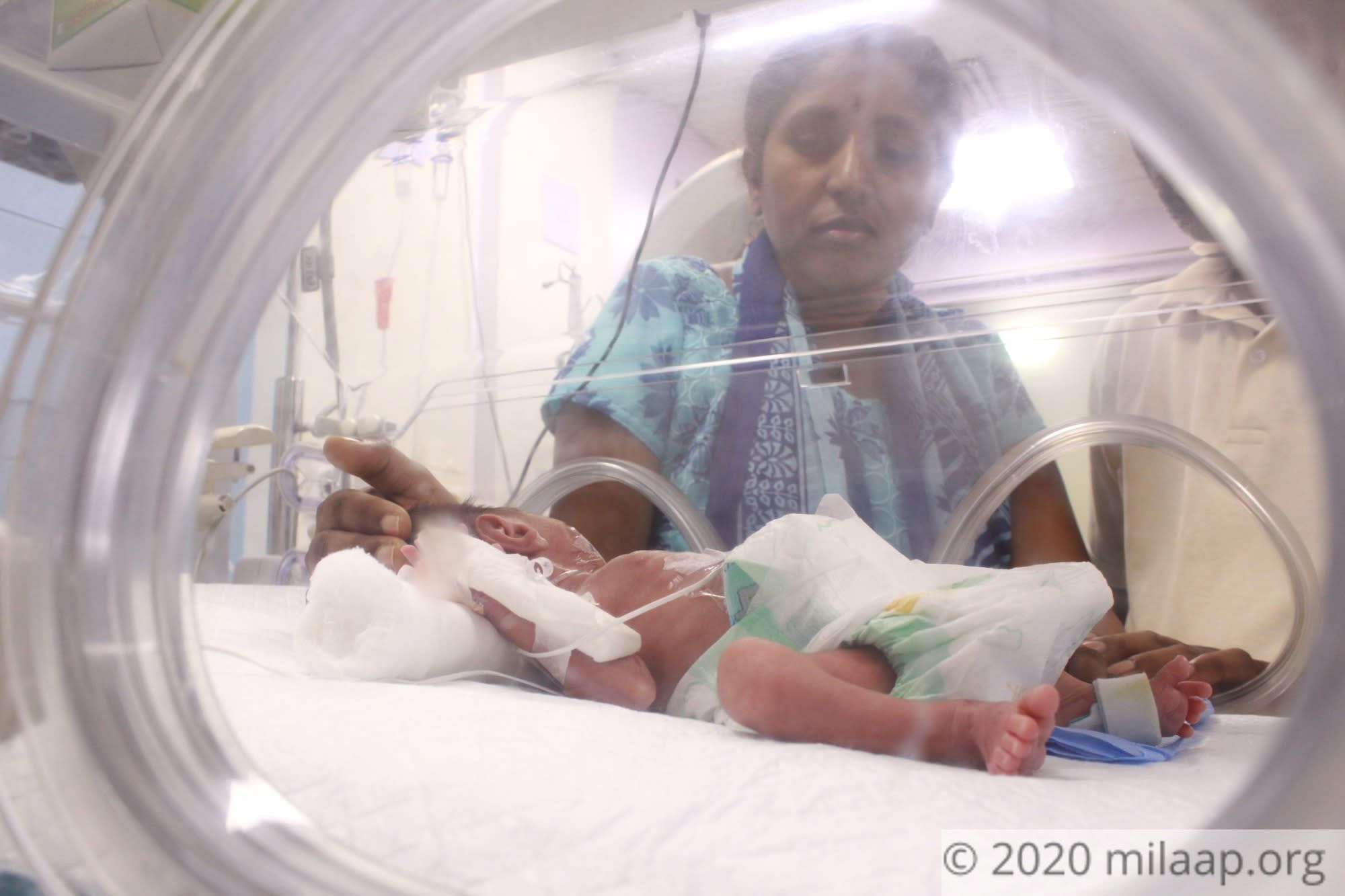 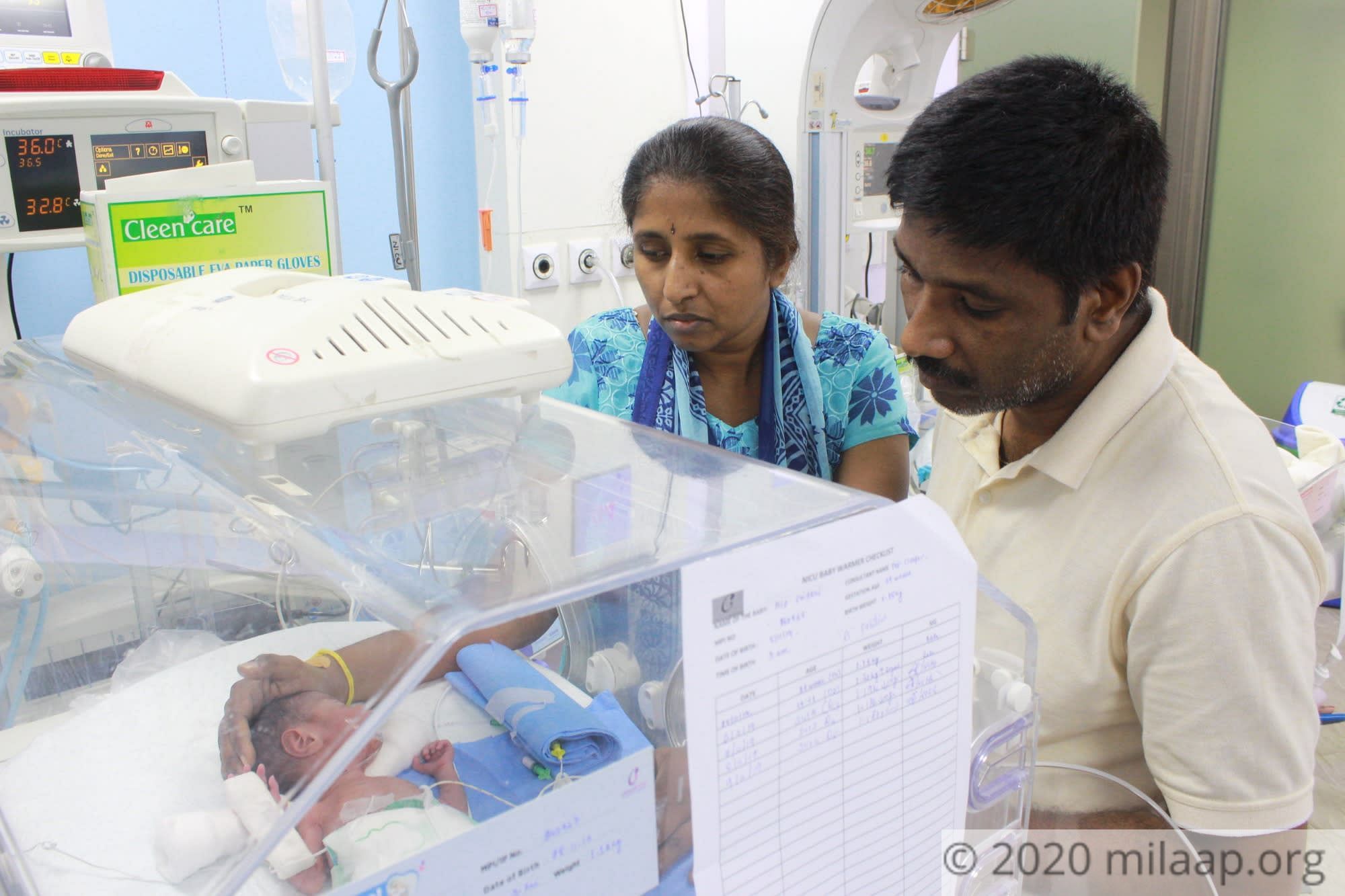 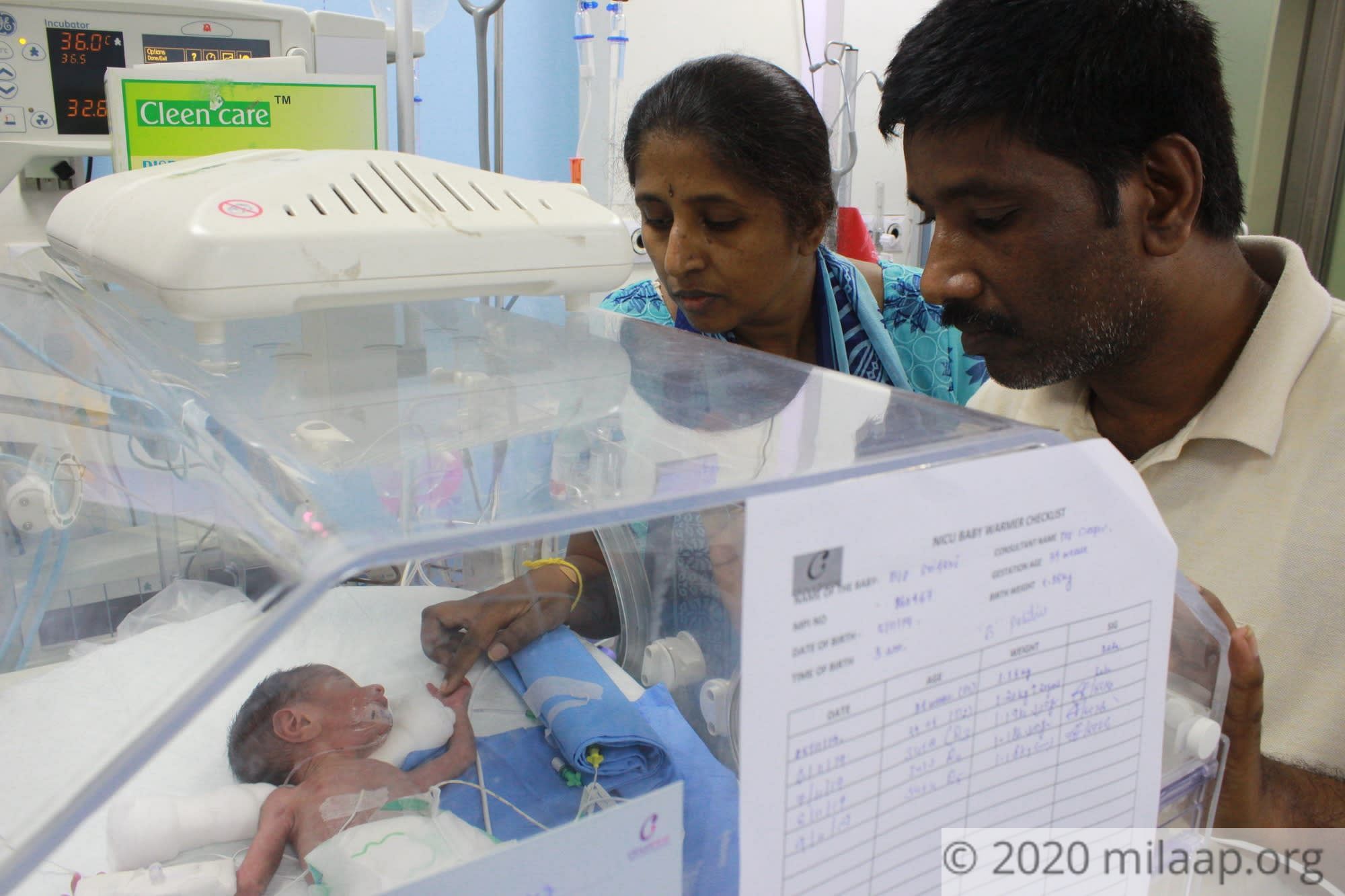 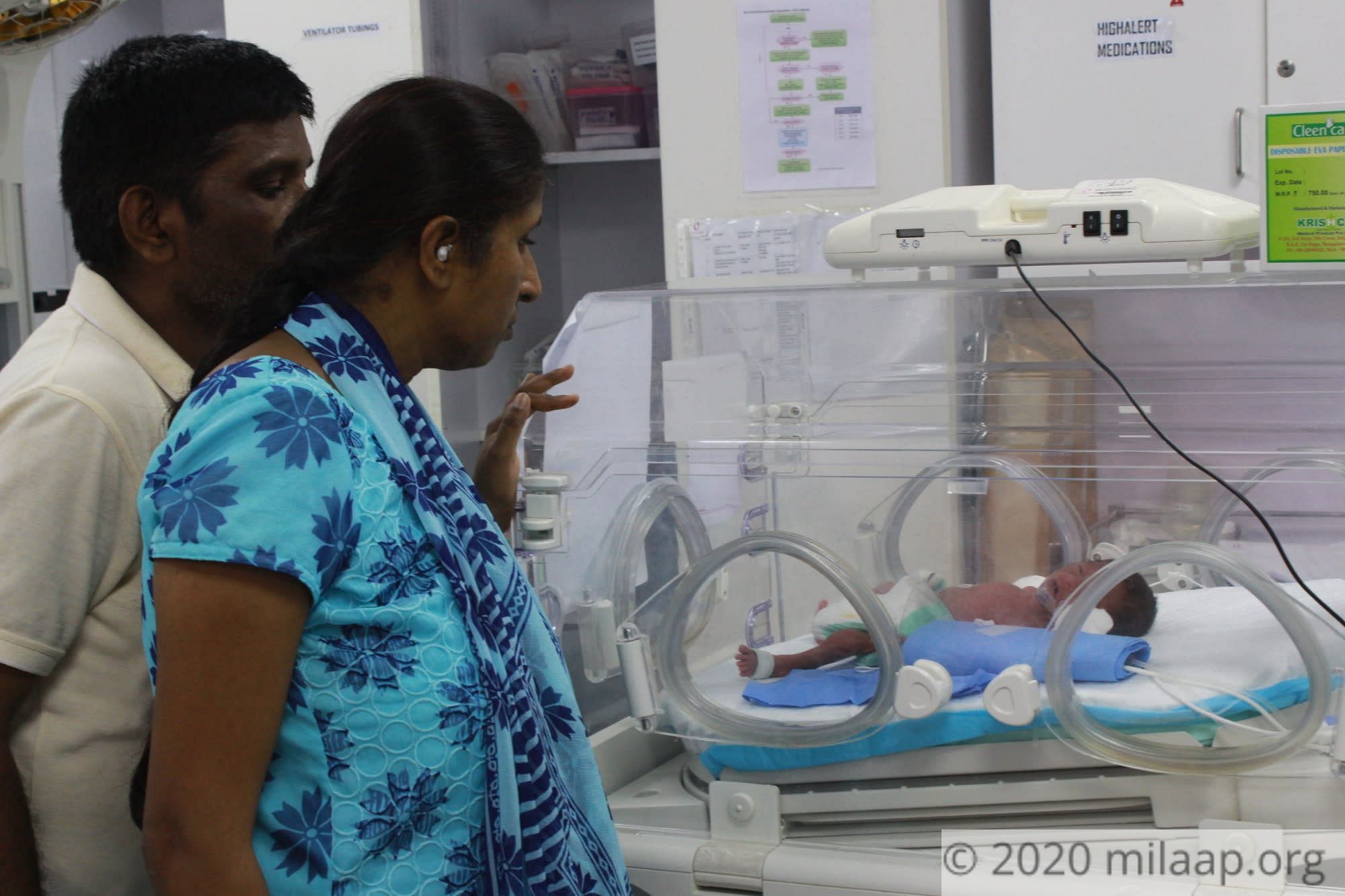 “Had he been alright, we would have been celebrating now! But fate has it that I endure this dreadfully long wait, before I can take him home. I will wait, but I want him to be okay. Will he be?” – Sridevi, mother.

Earlier this year, when Sridevi and Suresh had been told they were going to be parents again, their joy knew no bounds. With the little one tagging behind their elder daughter, their small family would now be complete, they dreamed. But a little later into pregnancy, things started to change and they were very worried.

During her pregnancy, she suffered from a fluctuating blood pressure

“My blood pressure kept fluctuating so much. It would rise really high, and then come back to normal, before it rose higher again. The doctors told me right then, that this means there might be complications at the time of delivery. I was very afraid. I did all I had to – took medicines, went for more frequent scans, prayed day in and day out, but nothing worked…” – Sridevi.

During one of their visits to the doctor, they told her that her condition was causing severe complications. The fluid in the placenta had come down drastically and it was risky to leave the baby in, any longer.

“It was still the 33rd week and I had only gone for a consultation. I did not see this coming. I was advised to undergo a C-section then and there, to avoid anything unfortunate. I couldn’t think. I just wanted my baby to be safe. So, the same day, I underwent surgery. It was a baby boy and I ached to carry him, and shower him with love. But I was denied that joy… instead of celebrating, we were in misery, with doubts and fear in our mind!” – Sridevi.

Sridevi’s pre-mature baby was underweight. With the baby’s lungs still immature, he has trouble breathing, He is suffering from a severe respiratory distress syndrome, and is currently on ventilator support, in the NICU. It’s been two weeks, and the baby is slowly recovering. With 5 more weeks in the NICU with supportive care, the baby has a good chance of full recovery. The treatment costs 4 lakhs, but the parents are struggling to afford it.


“I’ll tell you what hurts the most? Kangaroo Mother Care. I go there, tuck him inside near my chest and hold on to him, as he lies unaware. But for those few minutes, I don’t get to hold him close to me any other time. When they ask me to put him down, I don’t want to. I can sit there with him, forever, but move away from him, I can’t!” – Sridevi.

To avoid extra charges, Sridevi got herself discharged. She travels back and forth to see her baby

Suresh, the sole breadwinner of his family, works as a Kannada teacher in a private school. He earns no more than Rs. 15,000 a month. The last few months have been difficult on his pockets and the family doesn’t have any other source of fund. They are aching to save their boy, but are afraid they might not be able to.

“This is not how we planned to welcome him. We weren’t able to afford a hospital stay for Sridevi and had to get her discharged. She insisted that we stop her treatment because it's the only we could continue his. She stays home. Our house is far away from the hospital and they asked us to take a room nearby. But can we afford it? We can’t. She travels back and forth, and when she’s home she spends the whole day worrying about the baby. She hates staying away, but do we have a choice? This is our state now.” – Suresh, father.

These parents are putting up with the long wait, and the ache of separation just so they could bring him back home when he recovers. Your generous contribution can help them. 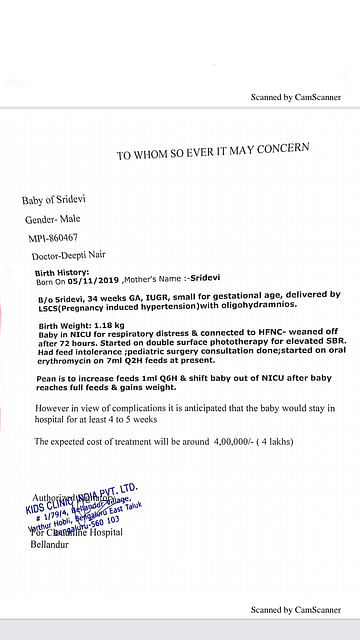 Click here to know more about Baby of Sridevi
Donate now
OR
Click here to read the instructions before you make a bank transfer.

Donated to this campaign via Paytm? Click here if you can’t find your donation listed below.
A
ABHISHEK donated Rs.200
BK
BHARATH KUMAR J donated Rs.200