His Father Died Of A Heart Attack After Seeing Him Reduced To Only Bones | Milaap
loans added to your basket
Total : 0
Pay Now 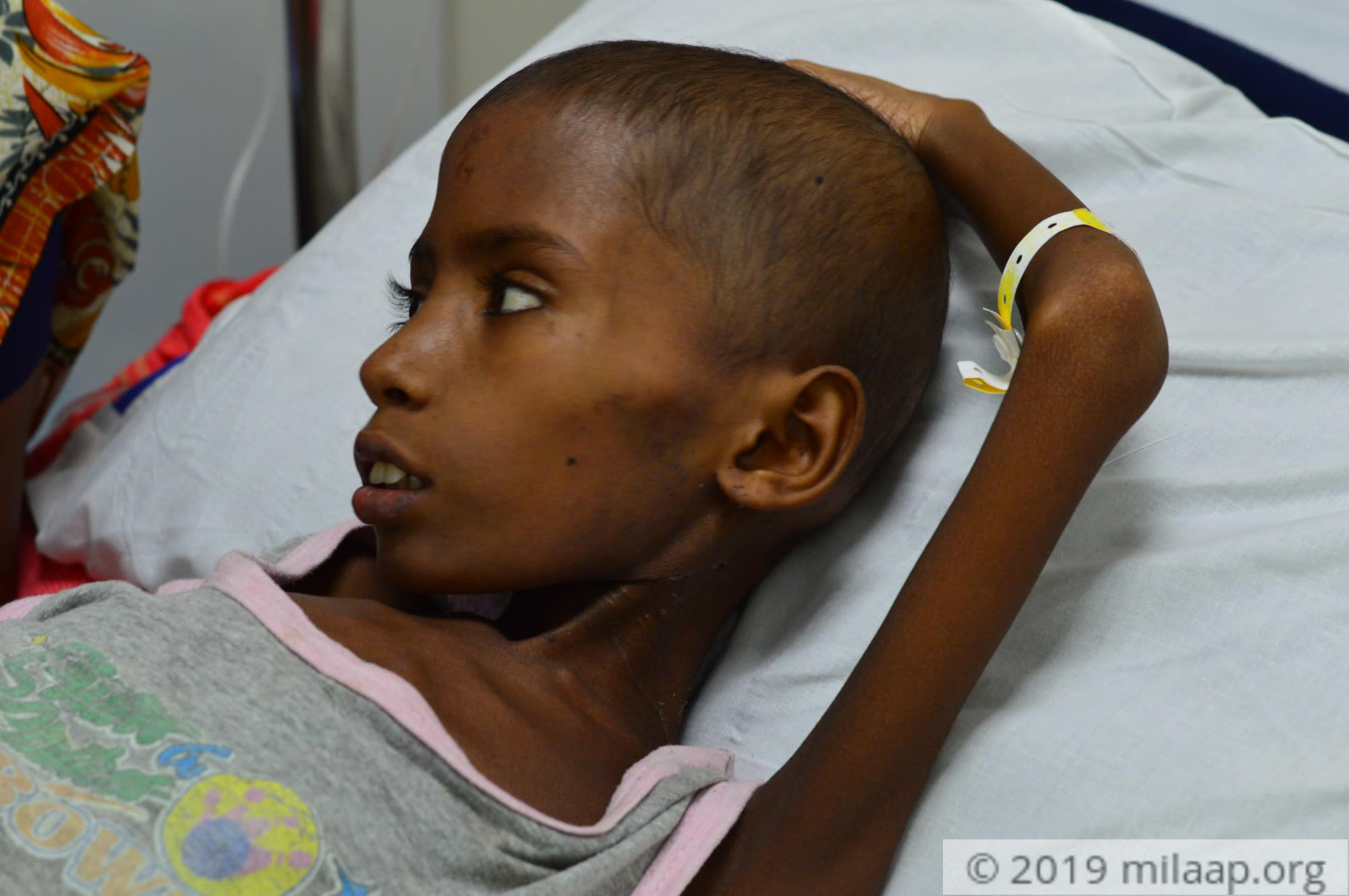 "I haven’t yet told Ashok about his father’s death. I don’t want him to know that he was the reason why he passed away. It’s been twenty days since my husband died. I hold back my tears and fake a smile in front of my child so that he doesn’t lose his strength to fight this disease that’s killing him. I have lost everything in my life now…what I live for is to see my son alive and live a healthy life." – Mariammal, Mother

9-year-old Ashok Kumar’s life has been a struggle from the sixth month of his birth. He was diagnosed with Thalassemia major, a blood disorder which causes severe anaemia and less red blood cell count.  Due to this Ashok suffered from fatigue, slow growth and only frequent blood transfusions kept him alive before he underwent a bone marrow transplant four months back.

It's been a 9-year long struggle for this young boy

"He was a healthy boy when he was born. My husband and my happiness knew no bounds. But it lasted only for just six months when the doctors told us he had a blood disease. From that day till now, I have only seen him suffer. He has to take a high dosage of medicines that burns his stomach and painful blood transfusions every 21 days for the past 9 years. We were praying that God will help us find a way out of it."

After various tests, Ashok underwent a bone marrow transplant in May where his 15-year-old sister was the donor. He responded well after the transplant and was getting ready to experience a normal childhood that he had missed for the past few years. His parents were happy and relieved that their dear son doesn’t have to suffer anymore. But again their happiness short-lived.

My husband was my strength throughout this battle, now I'm alone

"I thought he won’t suffer anymore. But within three months, things turned bad. He got an infection and from then he is having persistent diarrhoea. He cannot eat anything and if he eats he needs to go to the toilet within a few minutes. Ashok has to always wear a diaper now but the most painful part is he has become so thin that he is reduced to mere skin and bones. I can’t see him like this anymore. My husband was my strength throughout this battle but now I’m left alone."

Ashok’s father was a daily wage labourer who worked in their village. He had to toil tirelessly day and night in construction sites to look after his son’s treatment costs.  He borrowed money and used all his savings for Ashok as he believed that his son would be cured. Last month, he came to visit his son, hoping the transplantation would have cured him. But he was shocked at the sight of his son, he had a heart attack in a few hours after watching him suffer. Mariammal and his relatives had to take care of his last rites and she came back to the hospital the same day to take care of her son.


"He asks me where is appa. I lie to him that he has gone for work to a nearby state to make more money for the treatment. He even asks me to make a phone call sometimes but I wade off making excuses. Doctors have said that his diarrhoea is a side effect of the transplant and it will be cured soon if he gets intensive care support for a few more months. But where will I go for the treatment costs when I’m struggling even to buy a diaper for him? I have no money left. All I have is a little bit of hope with me. A hope that all the pain and struggle we underwent will not go in vain and my boy will live a healthy life soon."

Ashok's mother has no income and no help from her friends and family. Your generous contribution can help save her dear son's life and put an end to their struggle.

Donated to this campaign via Bank transfer/QR Code? Click here if you can’t find your donation listed below.
VC
Vivek donated $200

I hope he gets well soon