After Losing Both Parents This Year, This Man Is Desperate To Save His Son's Life | Milaap
loans added to your basket
Total : 0
Pay Now

After Losing Both Parents This Year, This Man Is Desperate To Save His Son's Life 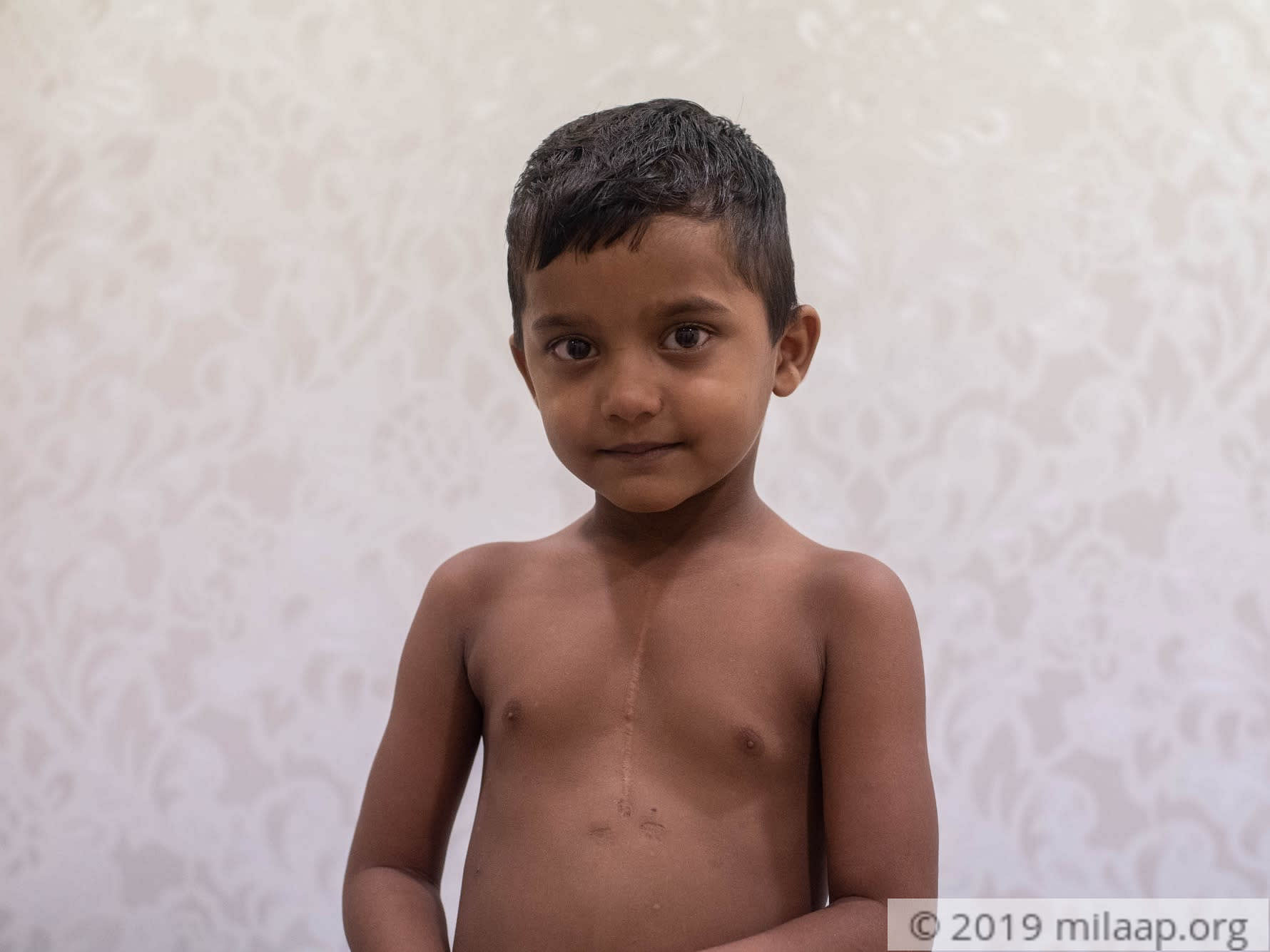 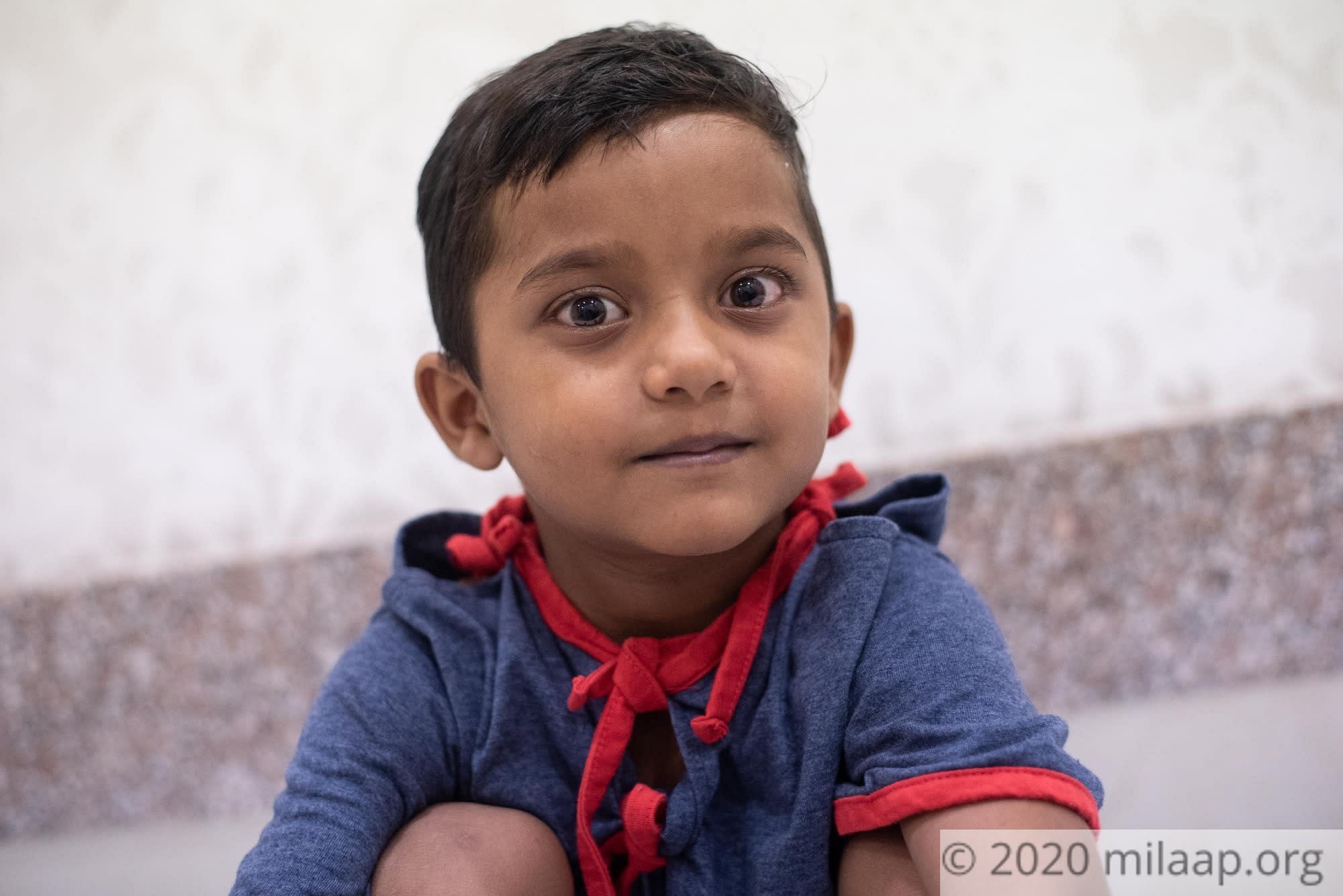 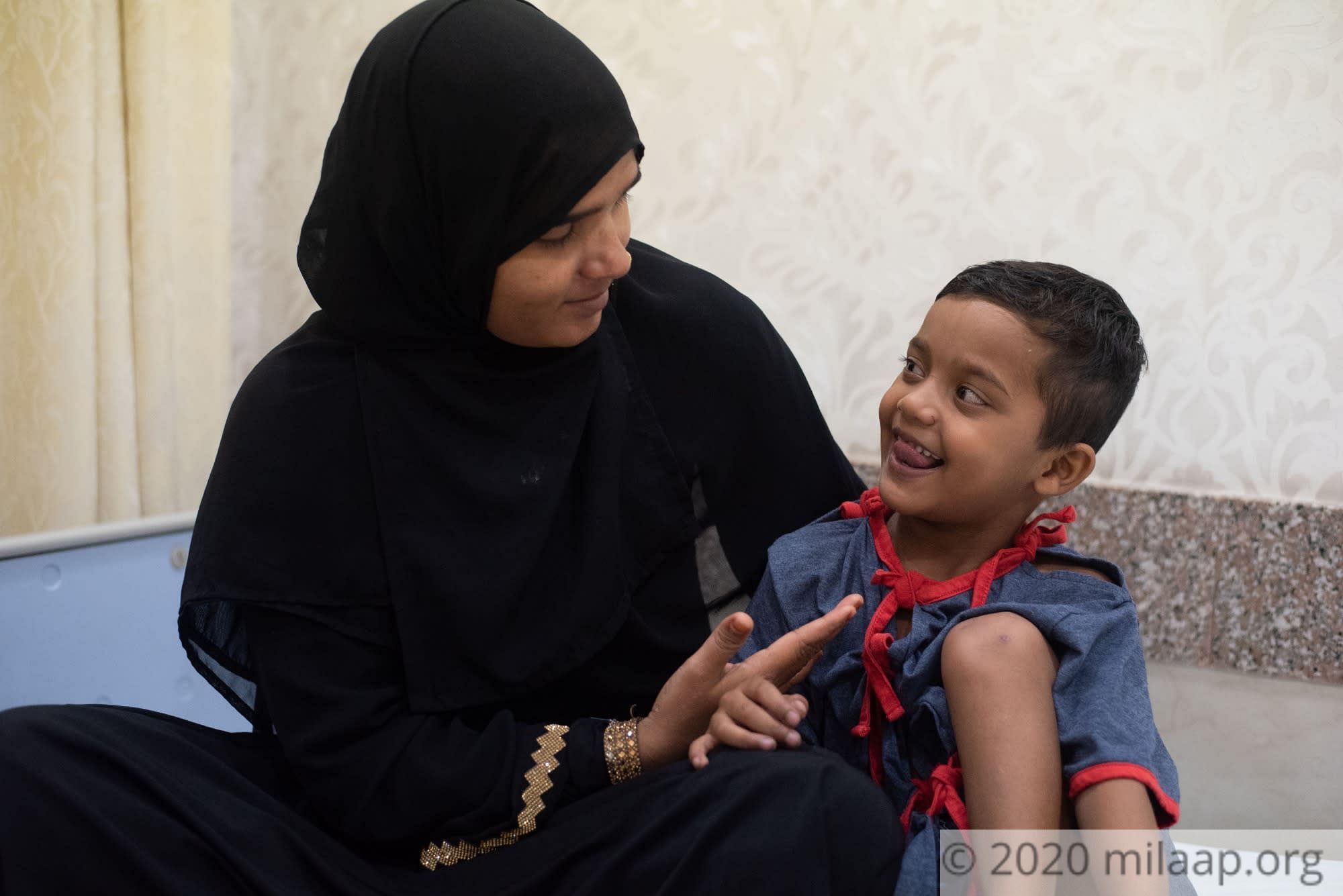 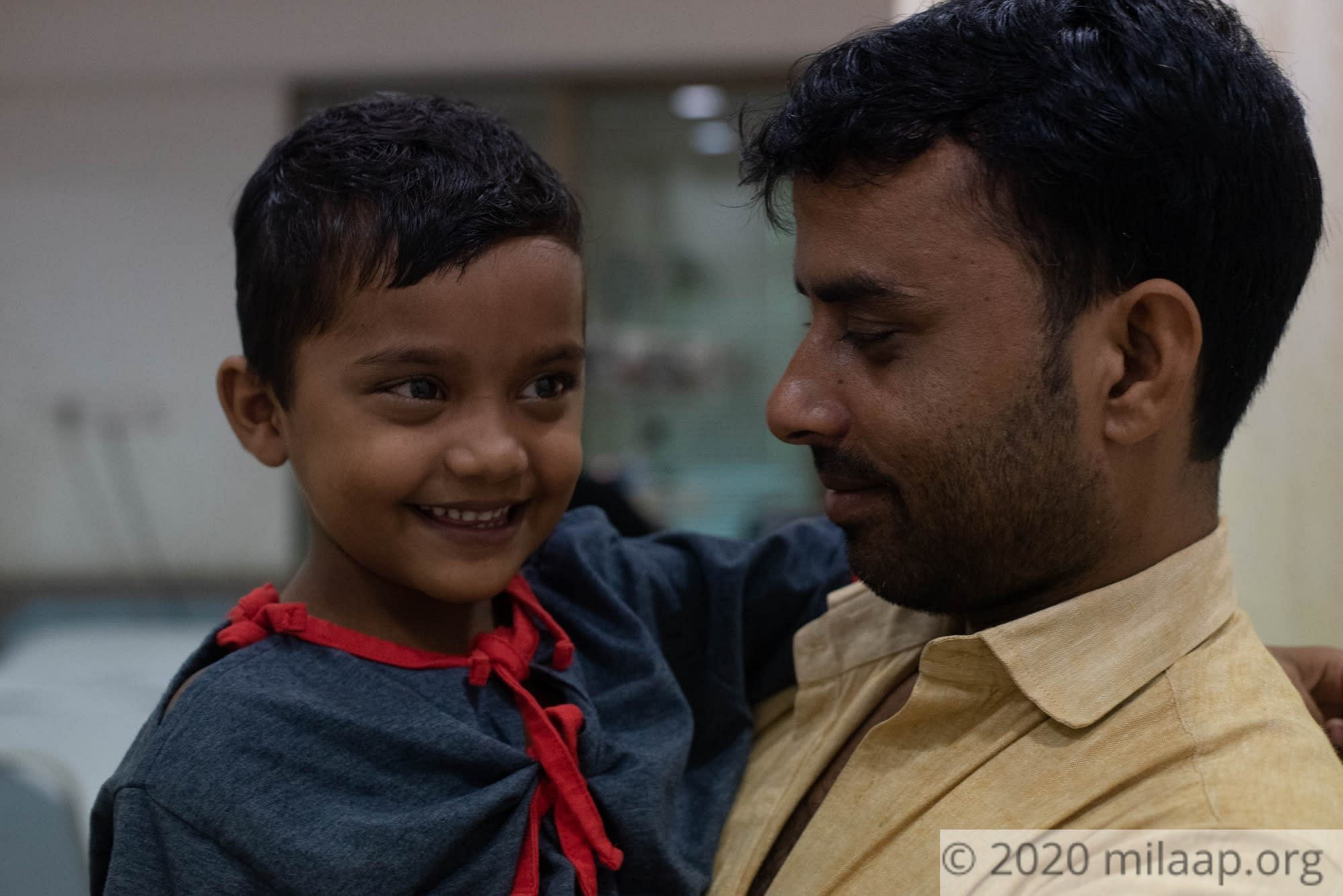 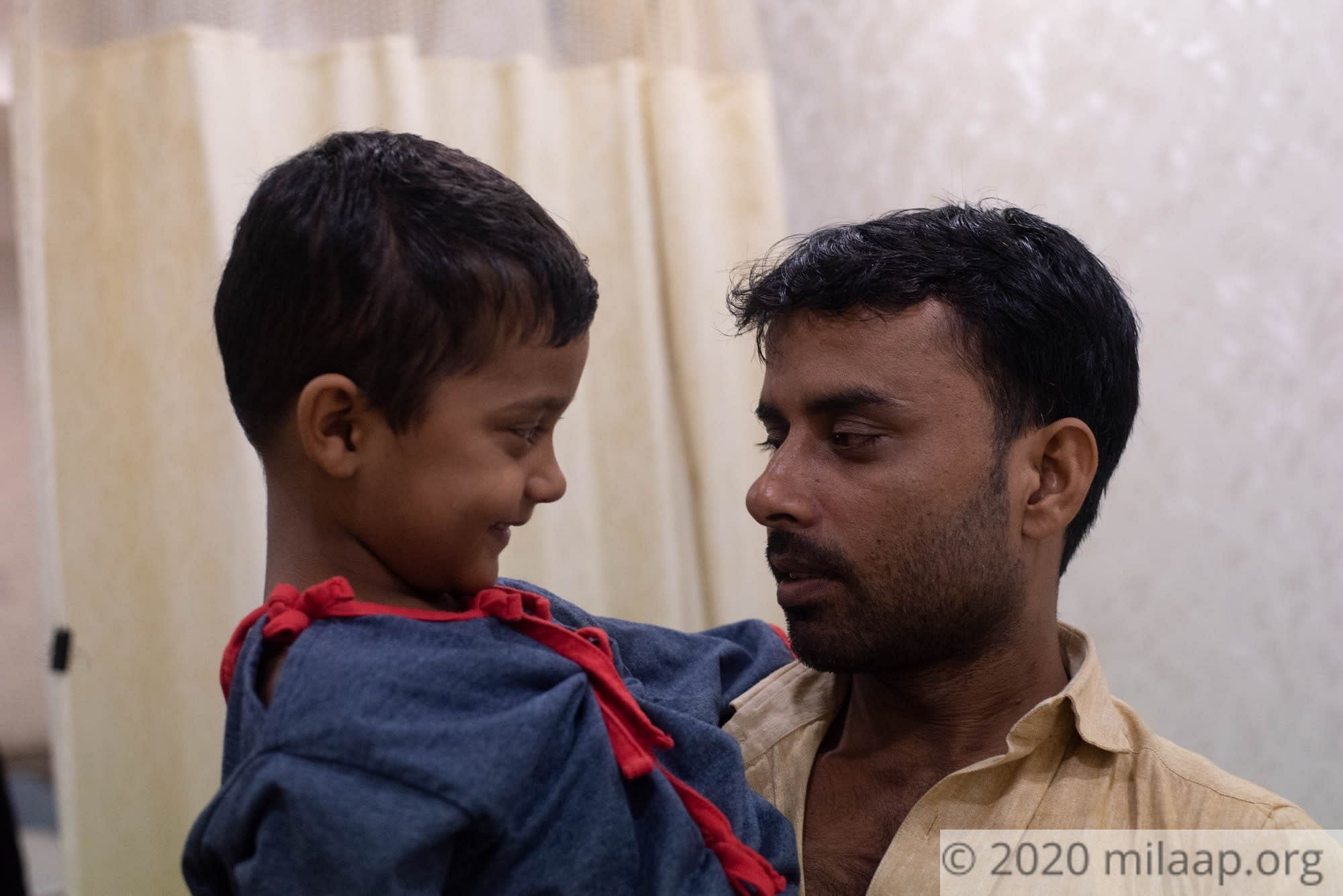 “My mother passed away in April and 3 months later, my father died too. I cry alone so many times because I can’t cry in front of my family. I have to keep it together because I want to save my son. If he doesn’t receive a heart surgery soon, his heart will fail. I can’t bear losing more people. We need help to get through this.” – Ishrar Ahmed, Aris’ father

Despite a heart operation when he was 1, Aris’s (5) condition is becoming worse with every passing day and he has sustained this for the past 4 years. Aris is diagnosed with a congenital heart defect known has Single Ventricle – which means that his heart has not fully developed yet. Even though there is always a smile on his face, he has been experiencing a lot of pain. He is racing against time to receive a heart surgery which his father cannot afford without your help.

We went from one hospital to another

“5 months after his birth, Aris got very critical due to pneumonia. He couldn’t even take one breath properly. Soon, we got to know about his heart problem. We came to Mumbai for his operation and we were only going from one hospital to another for 3 months as he was so critical. After the operation, we’ve been coming to Mumbai every 6 months for a heart checkup. It costs me Rs. 10,000 to travel to and from my village and it’s very difficult to afford this.” – Ishrar

He's so weak that he can't even carry his school bag

Despite the operation and medicines, Aris’s heart is very weak. His heart beats unusually and he gets out of breath so easily that he is unable to even continue walking after 10 minutes.

“His eyes turn red at times and his chest area turns blue. It’s so scary to see this happen. He wakes up in the middle of the night and starts crying because he is out of breath. My son is so weak that he can’t even lift his own bag and walk. It’s just very saddening. I want to save him.”

As his condition worsens, Aris is in urgent need of a heart surgery which costs around Rs. 4.7 lakhs. Ishrar, Gulnoor and Aris have been in Mumbai for the past 45 days and are still just going around the city looking for help but they’re running out of time.

“Gulnoor can’t stop crying. She fears that Aris won’t survive. But I just want to work hard to save him. We’ve left our 7-year-old son Arth back at home in our village and he calls us every day too because he’s all alone and tells us to come back home quickly. He says, ‘hope bhaiya gets well soon because I want to go to school with him.' I'm the only working member of my family. After my parents passed away, I can’t witness the death of my own son.” – Ishrar

Ishrar is already drowning in a debt of Rs. 2 lakhs, which is a massive amount for him as he just works as a driver earning Rs. 10,000/month. He hasn’t been able to work for the past few months and he has absolutely nothing left to sell, or no one to borrow from.

The surgery costs Rs. 4.7 lakhs and his family needs your help because 5-year-old Aris’s heart is failing. 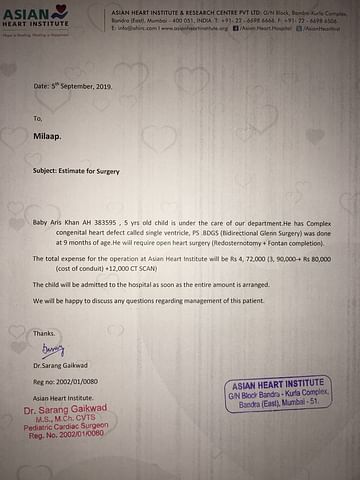 Click here to know more about Aris Khan
Donate now
OR
Click here to read the instructions before you make a bank transfer.

Donated to this campaign via Bank transfer/QR Code? Click here if you can’t find your donation listed below.
EN
Ekta donated Rs.5,000
A
Anonymous donated $50