She Dropped Out Of School So Her Brother Could Get One More Round Of Chemotherapy | Milaap
loans added to your basket
Total : 0
Pay Now 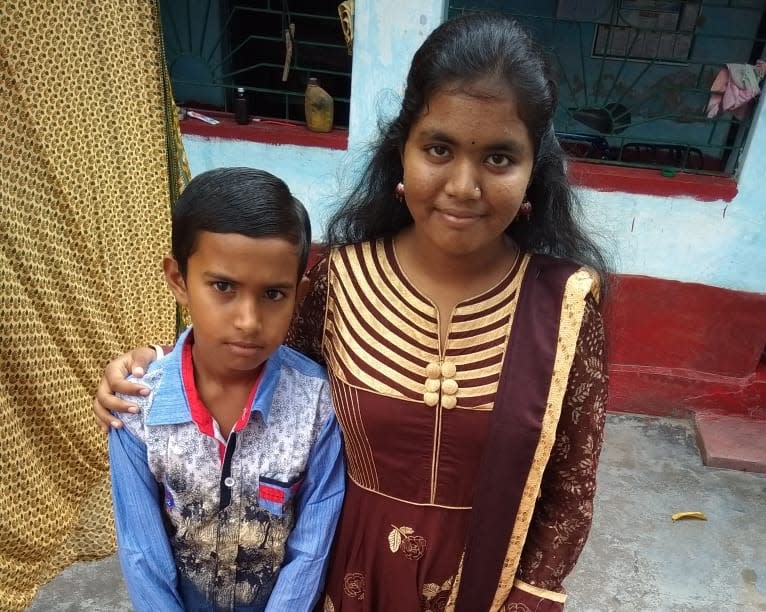 “His chemo puts him in so much pain. But through it all, the one person he keeps on talking about is his sister, Aparna. He really misses her. They talk on the phone every day but even then he feels it’s not enough. Aparna too feels bad, I know. She hasn't told him that she quit school so we could afford one more round of chemo. When she talks to me, she keeps asking when we will be back. I wish I had an answer for her…” - Mithu, mother

Our lives changed 4 months ago...

Mithu watches her 10-year-old son, Apurba, chat with a boy his age in the bed next to him in the hospital. She hears him reassuring the young boy, telling him that he will be fine soon. Tears roll down her cheeks. This helpless mother doesn’t know if she will be able to save her son from cancer, despite his positive attitude. Apurba has Hodgkin Lymphoma - a cancer affecting his immune system. Four months ago, when Mithu noticed abnormal swellings on Apurba’s neck and ears, she thought it was just a cold or an insect bite.

It wasn't an insect bite after all

“Who thinks of cancer first? We thought the swelling was some insect bite or even mumps.The doctors in our village found something suspicious in the tests and asked us to go to Bangalore. Here they confirmed that my son has cancer. Our lives just changed forever,” - Mithu

He is in great pain every moment he is awake now

Mithu and her husband, Tapas, wasted no time to start Apurba’s treatment. She sold her jewellery, borrowed from the neighbours and somehow managed to pay for the initial cycles of chemo. The rigorous chemo took a toll on the boy’s body - he started vomiting and could hardly eat anything. His hair started to fall so much so that they had to shave his head. His started to have boils in his mouth, even drinking a sip of water became painful.

A bus conductor by profession, Tapas is running from pillar to post to save his son

Tapas accompanied Mithu to Bangalore the first time they came but he had to go back to arrange for money or else his son’s treatment would have stopped. He is a bus conductor in Bolpur, West Bengal. His meagre earnings have never been enough for the family. Now he needs 5 lakhs for Apurba’s treatment.

“Aparna has seen my husband struggling for funds, and now she has dropped out of school. My husband and I have started eating just once a day. We're trying to save as much as we can. But 5 lakhs, that’s so much! How will we afford his treatment? I need your help, or else…” - Mithu

These parents are watching helplessly as their 10-year-old fights cancer. His smile is slowly fading as the aggressive disease is killing him. They are looking up to you for help.

Donated to this campaign via Paytm? Click here if you can’t find your donation listed below.
A
Anonymous donated 2,500 د.إ

Wish you a speedy recovery!