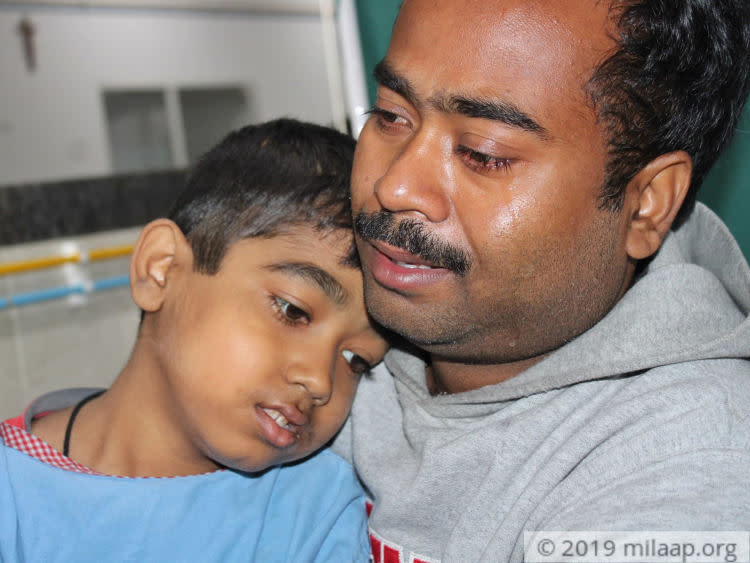 Share
"He woke me up in the middle of the night one time, saying he didn’t feel good. He had been sleeping in my bed because he had seemed weak all day and I was worried. I sat up and asked him what he meant, and he said he felt like vomiting.
I was just about to help him get out of bed when he started vomiting blood. When it was over, nearly a minute later, he was crying and shaking. There was blood everywhere. All over him, all over the bed… all over me."
– Dineshwar, father of Aman

It was in March that little Aman’s problems first started. He started developing dark spots all over his skin, starting from his arms then spreading to the rest of his body. His parents had initially assumed that he must’ve fallen somewhere and acquired bruises, but when the spots started increasing in size and number, they knew something was wrong and rushed him to a hospital.

I feel like a horrible father, I can't afford to save him

“The doctor told us my son had a rare blood disease, some ‘anemia’. I asked him what the cure was, and he said there were two options; one could cure him completely, but it costed 10 lakhs, while the other only had a 50/50 chance of saving his life, and it costed around 6 lakhs. I felt like such a horrible father that day, because even the second option was too much for me. I'm too poor to afford my son even a 50/50 shot at life…”

Ever since the diagnosis, Dineshwar has been desperately trying to come up with the money for his son’s treatment, working extra shifts at his job-loading cargo into trucks, and borrowing money from anyone who would listen to him. But his son’s condition has worsened a lot in the meantime, and that second treatment will not be enough any more. He needs full Immunosuppressive therapy, which will cost at least 10 lakhs.

This family is desperate now, and Aman needs your help

“He has severe breathing trouble nowadays, and constant pain in his arms and legs. He also bleeds so often now. The other day I was taking him to the doctor for a check-up and he started bleeding from his nose and mouth in the auto. The driver stopped and asked us to get out of his auto, and I had to carry my bleeding son all the way to the hospital.”