This 1-Year-Old's First Words Were In The Hospital, While | Milaap

This 1-Year-Old's First Words Were In The Hospital, While Battling Cancer 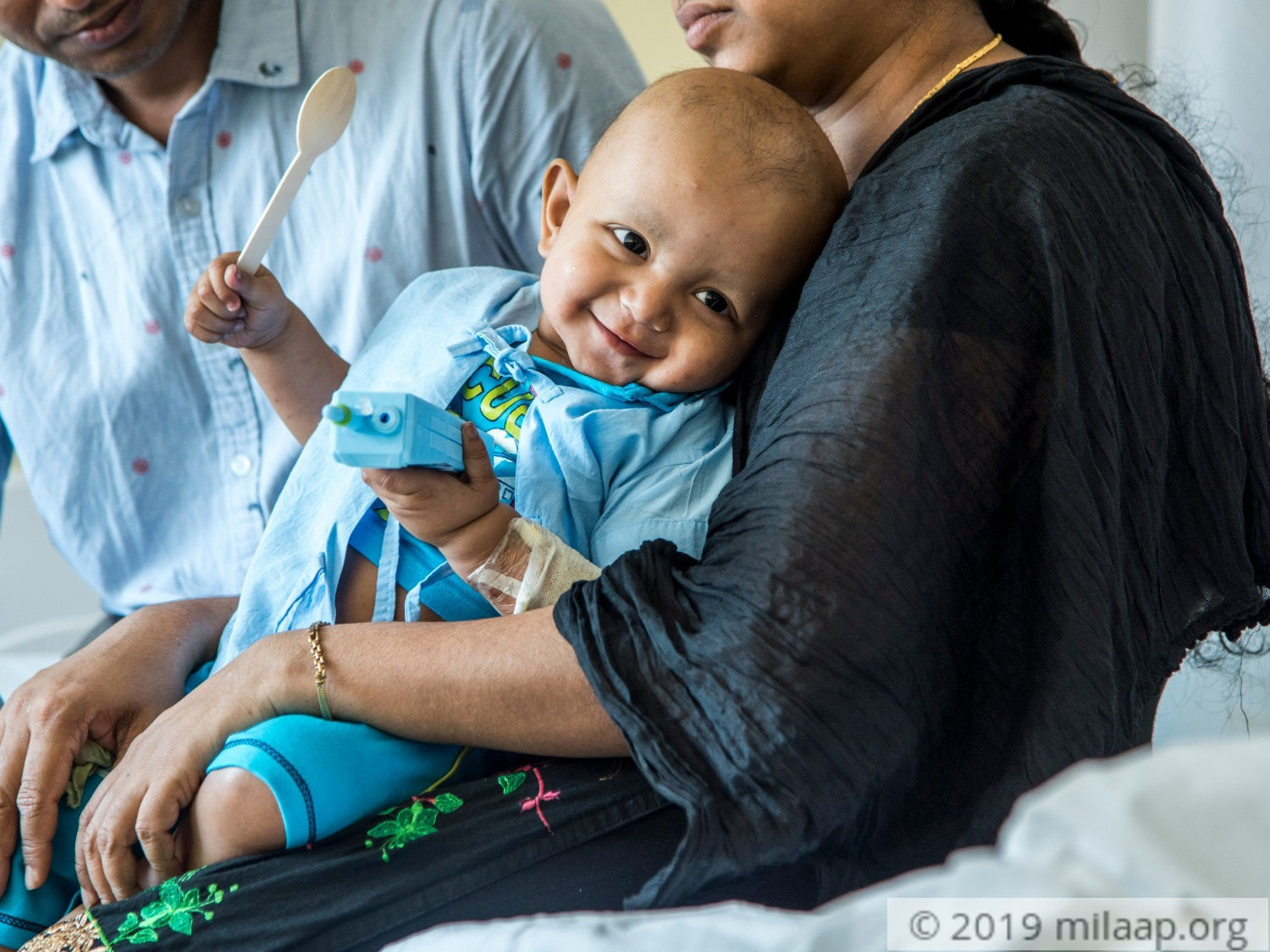 Share
The first word my son ever uttered was “Amma”, in pain, as the nurses pierced him with the needle for his chemotherapy. He was not even a year old at the time. Now, he needs a liver transplant!
I’ve seen him suffer for so long now, ever since he was born. I just... I just want it to stop.
I just want my baby to get better!
– Remya, mother of Ahan

Little Ahan first vomited mere moments after his birth. While Rajesh and Remya had gotten very worried, the doctor at that hospital had assured them that it was normal. For the next 6 months, Ahan vomited nearly every day. The young parents took him back to the doctor multiple times, and he always gave them the same advice: don’t worry, it’s normal. But then baby Ahan started having severe diarrhea and his stomach started to swell, and his parents knew that was anything but normal.

Their beautiful boy got a diagnosis they never expected

“We took him to another doctor, and told him everything: about the vomiting and the diarrhea, his swollen stomach. When we saw the worry on his face, we started to panic. He immediately ordered some tests, and when the results came... we found out our baby has liver cancer. Look at him! You'd never imagine such a beautiful little boy has cancer eating him from the inside."
– Rajesh

Rajesh tried his best to save his son’s life, but...

As a shopkeeper, Rajesh doesn’t earn much. But still, he tried his best, gathering funds from wherever he could, from loan-sharks and friends alike, so he could get his son the chemotherapy he needed. 5 months, 5 lakhs, and dozens of painful chemotherapy rounds later, little Ahan’s condition is actually getting worse instead of better.

The cancer is spreading and they don't have much time

“The chemotherapy... it did not work. They’re saying that his cancer... that it has spread, instead of becoming smaller. It’s in his lungs now, and it’s already starting to affect his breathing. Every now and then we find him gasping for air. Hasn’t he suffered enough?! He’s just a baby! It's all coming from his liver! He needs a new one right now, but I can't afford it...”
– Remya

Despite their best efforts, this family has been unable to save their son. Now his life hangs by a thread, and only a liver transplant can save him. Contribute as much as you can for his operation; every little bit counts.
AD
Patient Ahan Dev is 1 year old, living in Kochi, Kerala
AC
Being treated by Dr.Mathew Jacob in Aster Cochin, Kochi, Kerala