'My Son Has Not Eaten In 45 Days And Is Suffering...Help' | Milaap
Receive tax benefits by donating to this cause.

'My Son Has Not Eaten In 45 Days And Is Suffering...Help' 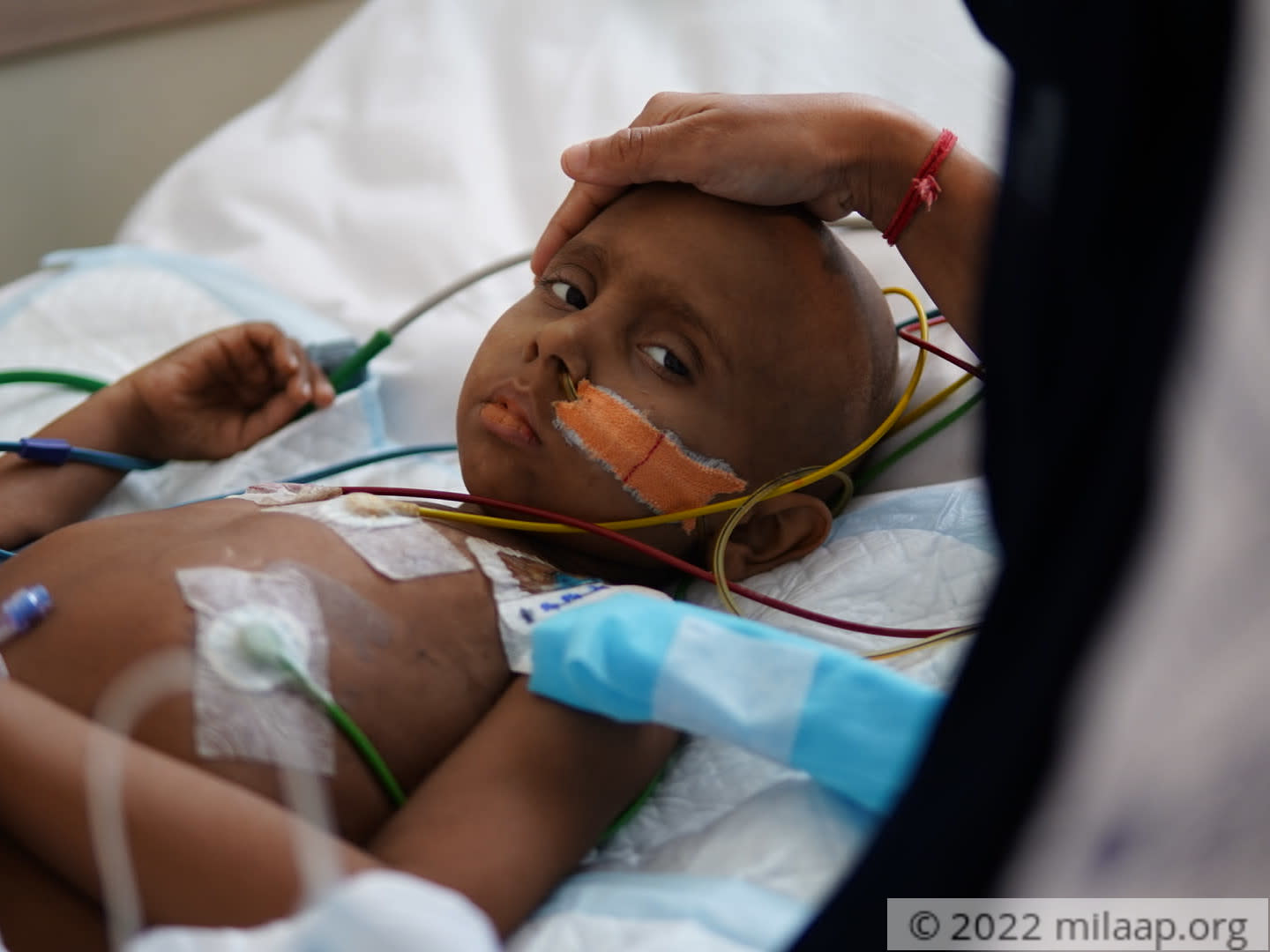 Share
Abdul Hadi has been admitted in the ICU for over a month now, after getting a bone marrow transplant that he desperately needed. He has not had a proper meal to satiate his hunger or enough glasses of water to quench his thirst in over 45 days. He cannot even speak properly because of his weakness – he points to his tummy and cries, indicating to his parents that it hurts.

“We just want to see him healthy and happy. We have seen him suffer for long now. We feel quite helpless seeing him lie in bed, bald and with blotches on his discolored skin.” - Mohamed Haneef, father

Abdul is suffering from GvHD or Graft Versus Host Disease, a condition that occurs when donor bone marrow cells attack the recipient. In his case, the gut cells in his abdomen are sustaining damage, causing him excruciating pain. As his disease is in stage 4, he is very critical and needs supportive care in the ICU for a few more weeks to be completely out of danger.

‘We believed his struggles would end with the transplant…’

Abdul was diagnosed with thalassemia major, a blood disorder which causes the underproduction of hemoglobin and red blood cells in the body, when he was just an infant. Ever since then, he had been undergoing regular blood transfusions.

But these blood transfusions were just a temporary fix for his condition and came with the risk of iron deposit accumulation in his vital organs which could shorten his life span. This is why his doctors back in his hometown in Sri Lanka advised his parents to get him a bone marrow transplant as soon as possible.

“We came to India in February 2022 with great difficulty, and his transplant took place as planned. However, he got sick just a few days after, which has put his life in danger. We believed the transplant would be the end of his issues, but now unfortunately he is fighting another disease soon after it. We do not know why his struggles are never-ending.” – Mohamed Haneef

This father has nothing else left to sell or pledge, and is completely out of funds

Mohamed Haneef works as a supervisor in a private company in Sri Lanka. He had to use up all his savings, sell whatever jewellery his wife had, and borrow from friends and relatives to pool enough money for Abdul’s bone marrow transplant. Additionally, he is also having to pay for food and accommodation in Chennai (near the hospital Abdul is admitted in) as the family has no relatives in India.

He was able to manage things until the transplant, thinking he could take Abdul back to Sri Lanka soon. But fate had other plans, and Mohamed Haneef finds himself financially drained at the moment. As Sri Lanka is undergoing an economic crisis presently, he does not even know if he has a job to go back to.

“I already spent more than 20 lakh Indian rupees for my son’s transplant. I was only expecting that single expense, but now my expenses have doubled. I need to pay more than 10 lakh rupees for his current treatment now, but my bank accounts are empty. I have two other children to look after. How will I manage all this? I need help.” - Mohamed Haneef.