By Chandana Upadhaya
04 May, 2016
Shares
Share on Whatsapp
I was on a field visit to Mekhali, a small village in the Belgaum district of Karnataka. Though I was not scheduled to meet her, the field officer from MASS, accompanying me insisted that I meet Shobha Lokure. Former devadasi, a mother, a daily wage labourer, and a vivacious entrepreneur - Shobha has persevered through the most difficult of times to be the successful business woman she is today. Shobha is a victim of the age-old tradition of devadasi system. Her parents dedicated her to Goddess Yellamma when she was seven and with no one to look after her, she soon ended up as a prostitute. She met the love of her life while still a devadasi and they had a son together. Her husband left no stone unturned to take of her and their son. They were not given employment anywhere as marrying a devadasi is grounds for social outcasting. The first few years were really difficult for them and they both had to work as daily wage labourers and toil in the field all day. Later, Shobha took a microloan from MASS and started her own animal husbandry. They worked really hard and with the additional income from the animal husbandry, they saved up enough to open a Kirana store.

Shobha outside her kirana store and her husband's tailoring shop

Shobha’s husband continued to work for daily wages while her kirana store started to flourish. The villagers had to walk more than 10 kilometres if not for their store. Her husband  decided to start a tailoring shop for men's garments and it ended uo being a huge success. Though she had three running businesses and sufficient income for her family, Shobha continued giving her best. The entrepreneur spirit in her gave her the energy to buy a cruiser and start a transportation business. Her son, 22, drives the jeep as a shared transport between remote villages. She recently also started a band-set company. Every time there is a wedding, festival, or a carnival in their village, Shobha’s husband and her son hire a few helpers and play the drums and other musical instruments to lift people’s spirits.

Shobha's son with the band members

Shobha has repaid all the loans she has made over the years for different businesses and is leading a comfortable life. The transformation from back-breaking work as a daily wage labourer to an entrepreneur with five different businesses has taken her more than two decades to reach where she is today. But, this journey was not just about making money for her. It was about gaining the respect of the same people who had once rejected her from their community. The pride in her eyes spoke volumes about the miracle that this journey has done in terms of building her confidence. This amazing business woman is an inspiring tale for all the budding entrepreneurs in her village.
"I survived, I had fun, gained respect of my people and made a small fortune doing business my way!" 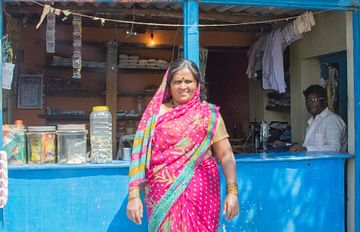