Her Family Was At The End Of Their Rope When You Stepped Up And Saved Her, Now You Can Help Others Like Her 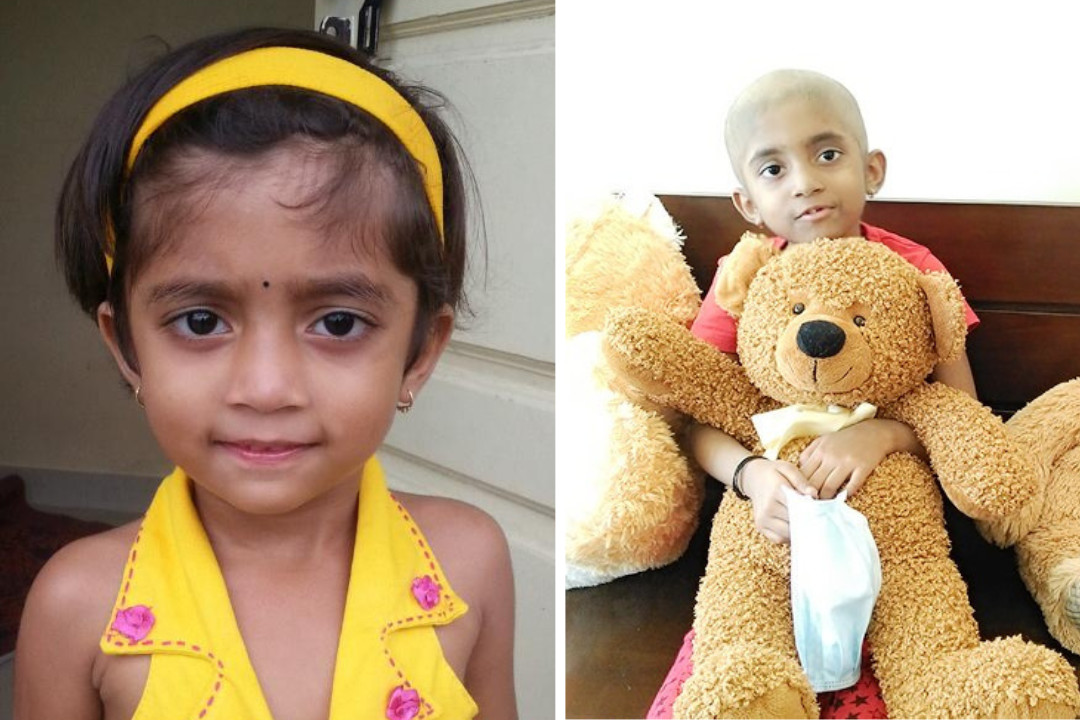 For Ramya and Narayan, Charvi was the answer to their ardent prayers of having a baby girl. So she was doted on immensely since she was born, and was the apple of her parents’s eye. Charvi had been in good health for the first few months of her life, achieving all her milestones at a normal pace. Until one day, when she was about 3 months old, her mother noticed her skin turning far too pale.

“The doctors were unable to identify what was wrong, and our baby needed to get multiple blood tests done. Her blood count was a shocking 6.8, less than half of the ideal haemoglobin level. Charvi was diagnosed with hereditary spherocytosis, a condition that reduced her blood count to an abnormally low level, following which she would have to get blood tests every 15 days.”- Ramya

A year into her treatment, they found out she was misdiagnosed

It seemed like a cruel twist of fate to Ramya, a lab technician, who was so accustomed to hearing of such disorders in passing, but never could have imagined that her beloved child was suffering from something like this. She still held out hope that her daughter could keep going till she turned 5 years old and would be able to undergo surgery to remove her spleen, as long as she underwent regular blood tests and transfusions, and took her folic acid tablets. But that hope too was short-lived.

“About a year into her treatment and after a few health scares, we learned that she had been misdiagnosed and she was actually suffering from unstable haemoglobin disease, an extremely rare condition that made her RBC count drop constantly. This clarity came when Charvi’s blood count suddenly fell one day, reaching a low of 4gm, and she had to be admitted to the ICU. I was terrified at the thought that I was going to lose her, but a blood transfusion saved her.”  - Ramya

The new diagnosis had shocked Ramya and Narayan, but they were slightly appeased to know that there was an easier solution - a bone marrow transplant. However, they soon learned the price this procedure came at and were left utterly dejected. Ramya, a lab technician, and Narayan, an Amazon delivery partner, had no way of affording this transplant costing INR 25 lakhs.

“We sold everything we had, including my wedding jewellery. We just couldn’t afford her transplant. We had no one to turn to for help, either. Nowadays, when a family has a problem, others keep a distance from them. People avoided coming to us because they thought that we would ask them for money. Many people even told me, ‘Why are you worrying about her so much? She’s a girl. Leave her.’ But how could I leave her? How does it matter if she’s a girl? I had prayed to God to bless me with a daughter. ” - Ramya

When all else failed, you reignited their hope

Ramya and Narayan felt really helpless when they got to know that their daughter’s bone marrow transplant would cost them a fortune - until you reached your hand out to help them selflessly. Charvi was soon able to undergo a life-saving transplant with her mother as her donor, which would have been impossible had it not been for the love and support you showered upon her and her family.

Not only that, but your contribution strengthened their trust that there are people who care, which has also motivated them. Ramya and Narayan vowed to give their daughter quality education, the kind that would enable them and Charvi to help others socially. Today, Charvi is 12 years old, her family is living up to their promise to give back to the community.
Charvi in recovery, post-transplant

“That was the day she was reborn. Her birthday is actually on May 12th, but we celebrate it on 31st December - the day she successfully underwent her bone marrow transplant. I cannot express how grateful I am to all the supporters who brought my baby back to normal and a cheerful life. Her smiles today are the reflection of all your bountiful blessings. Everyone has played a huge part in helping bring change in my little girl’s life. It has created a strong urge in us to help anyone with whatever sources we have, and in any way, we can.”

Charvi’s parents were fortunate that their prayers were answered right in time, and that your help arrived before something bad could happen to their little angel. But the bitter truth is that many children born with rare disorders do not receive the same help. Millions of innocent kids suffer from cruel symptoms such as underdevelopment, weakness, localised pain, etc, due to which their life becomes a living nightmare.

If these little ones do not get treated within a specific period of time, the quality of life suffers, and eventually they face the risk of death. Funds stand between them and their healthy, bright futures. You can help avoid these complications, by donating to Milaap Kids’ Rare Disease Fund, which will ensure that no child suffering from rare diseases is left behind.

Click here to learn more about how you can make a difference.