Priyanka Premature Babies Are Struggling To Live In The ICU | Milaap
This campaign has stopped and can no longer accept donations.

Priyanka Premature Babies Are Struggling To Live In The ICU 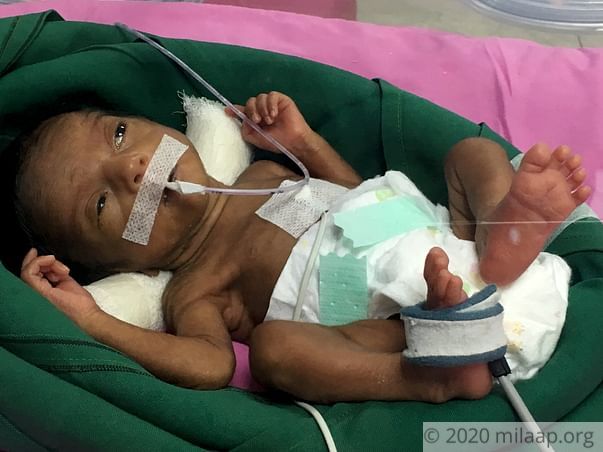 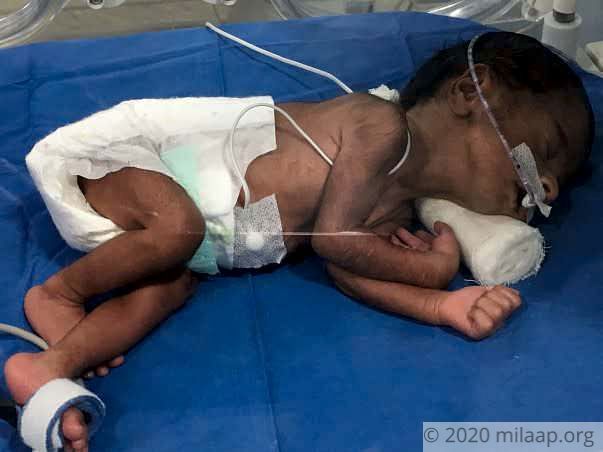 Previous Next
We got married just last year but I feel like I have known Dilip all my life. He is everything I want in a husband – loving, caring, and above all, puts my wishes before his. When I got pregnant within a few months of my wedding, I was not sure if we were ready to be parents as he was a peon in a school, and I was just a housewife. We did not have savings.

But Dilip gave me strength. He told me, “Priyanka, we may have to make some adjustments financially, but we will give our child the best of everything.” When we got to know that we were having twins, his happiness grew twofold. But our babies chose to come into this world, when I was only 7 months pregnant, and we are struggling to save them now.


“The pregnancy was a fairly smooth one. Unexpectedly one day, I felt a sharp pain in my abdomen. It was late at night but Dilip did not want to take any chances and took me to the hospital. We were told that the water levels surrounding the babies were going down and this was causing the pain. I remember feeling very scared – like I have never before. The pain was excruciating but I only pleaded with the doctors to save my children and nothing else,” recalls Priyanka.

The twins - a girl and a boy - arrived two days later, on February 22, and had severe breathing problems to start with. Their weight was also an issue, especially my baby girl was very underweight. They had to be rushed to another hospital with advanced facilities as they were critical. I remember seeing their red faces and wrinkled skin, and asking myself, ‘Will they be alright?’

For the next 20 days, I saw my children on machine support. Their soft cries were muffled by the tubes covering their faces. I wanted to touch them, hold them close, but couldn’t. They were fed my milk through these tubes and I watched helplessly. I wanted to cry out loud but my husband supported me throughout. He told me this was just a bad phase in our lives.

He told me that things would be alright. But I knew that behind his reassuring smile was hardship. He only earns Rs 8000 a month. He had to ask a few well-wishers for paying off some of the hospital bills. He was dying inside but he still chose to calm me down. I don’t know what I would have done without him by my side.

Our babies need to spend at least 20 days more in the NICU. They are at the risk of contracting deadly infections if taken out of the protected environment they are in now. They still need to put on weight and their lungs have to develop, if they have to make it. My husband is trying his best but is finding it difficult to arrange funds. We are waiting for our children to come home with us. Can you help us? 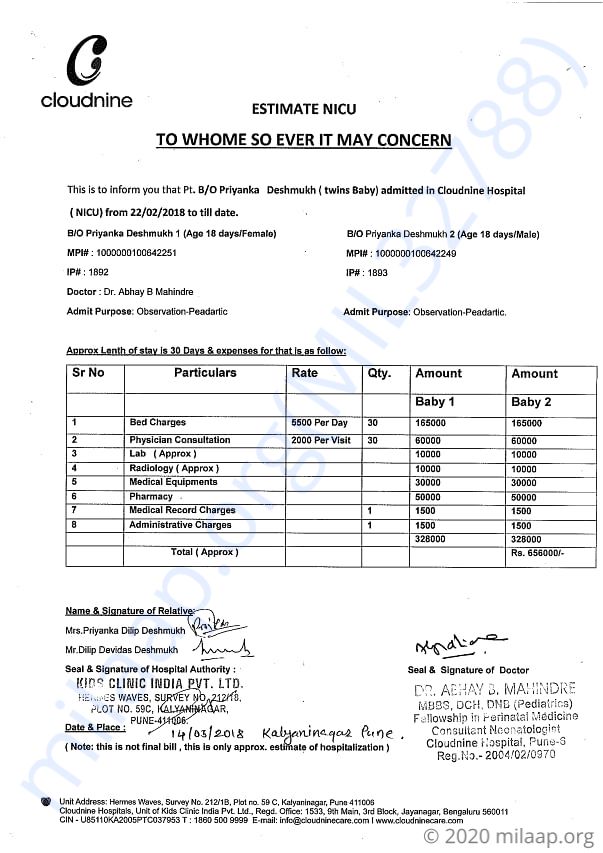 It gives me immense pleasure to inform you all that the baby is doing much better now and will be discharged today.

The baby's weight has increased to 1.5 kgs from 985 grams when it had just born, which is a huge improvement. Also, there were some serious breathing problems which have now been cured completely. The doctor has advised them to see him on the coming Saturday post which the family will be notified about the further course of treatment (if required).

Thank you everyone for your love. Please keep supporting us.

Scan & donate with any app
check_circle_outline Download payment receipt
Report fundraiser
Know someone in need of funds for a medical emergency? Refer to us
Rs.11,725 raised

You are sending a message to
Sagar Sanas
Go back 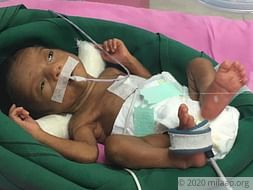 Priyanka Premature Babies Are Struggling To Live In The ICU