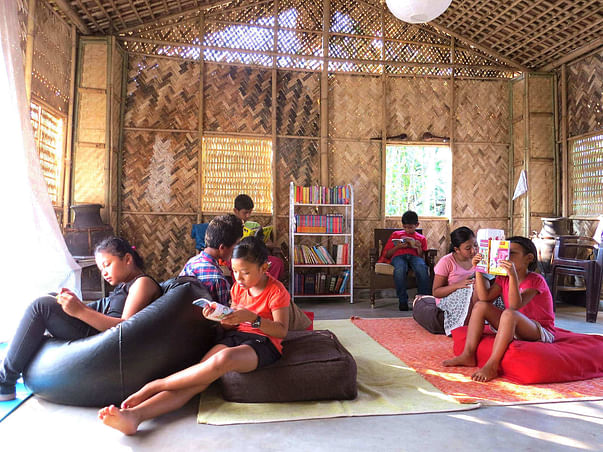 Share
Jemimah & James were not thrown off balance when faced with the challenges of setting up the library.
They didn't possess land large enough to locate a library.
Since they are teachers -- he is a mathematics and science teacher -- and their salaries not sufficient to rent a place, so they redid their home's rooftop terrace and made that the address of the library.
The couple took a loan and got the place up and running.
Every month, when they received their salaries, they put some money aside towards growing the library.
It took four months for the library to become functional.
A year later, when 100 Story was operating smoothly, Jemimah took the leap of faith.
She quit her school job, to dedicate all her time to the library.
It was almost a natural progression for her -- doing something she loves so much finally happened very organically.
The couple now pride themselves on the 65 students who have registered with them, with 15 to 20 visiting the library regularly.
Nestled in the heart of the Garo Hills is a rustic library called, cutely, The 100 Story House.
Among its many visitors, you will mostly spot children, between the ages of 5 and 15, at this popular library in Tura, rural eastern Meghalaya.
The Garo Hills, located about eight hours from India's border with Bangladesh, has been riven by insurgency as rebel Garo tribals fight the Indian government for a land of their own.
Parents are scared to send their children to school alone, fearing that they may be kidnapped for a ransom.
Amidst this upheaval, school teachers Jemimah Marak and her husband James Momin, the founders of The 100 Story House, are determined to turn things around for the local children with their picturesque library that belongs to another world.
Later, they realised, it was difficult on a regular basis to take their children to 100 Story.
Eventually the numbers dropped.
"In the hills, especially in a small town like this, children walk for five km to reach a place. But due to the disturbances here, parents are not that confident," says Jemimah.
"The place is not safe for kids to move around on their own. So parents would (bring) the kids themselves. Or get someone to drop them off," Jemimah adds.
That's when she hit upon the idea of collecting money for a van to help ferry children to and from the library.
"I would really like to raise some money to buy a mini-van in order for us to go around town to bring the eager children here to the library or can be used as a mobile library," she says.
"Right now, we do not make money to afford a vehicle. To try and save up for a  mini van or even a second-hand van seems a huge challenge. Many children have expressed a desire to come here regularly, but are unable to do so as they live far away."
Till date the couple have only raised Rs 28,000. That hasn't dampened their spirits.
"We will continue to raise money and work towards our goal. We will continue to put the word out,"