Nitin's online fundraiser for Sports | Milaap
Milaap will not charge any fee on your donation to this campaign.
I am fundraising to support paralympic gold medalist swimmer Bharat Kumar 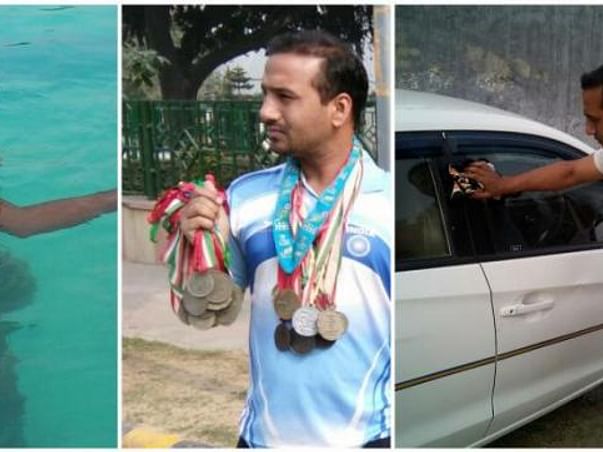 I am fundraising for a differently-abled gold medalist swimmer so that he can represent India.

Why I am fundraising?

Hailing from Haryana, Bharat Kumar is a paralympic swimmer. He does not have a left arm since his birth. Among the many medals he has won for India, there are gold medals at the 2005 Junior National Level Athletics and the 2009 World Games and a silver medal at the 2006 Junior World Athletics in Ireland. Apart from this, he has also participated in the 2010 Commonwealth Games and the Asian Games held in China.

Bad financial conditions forced his father to send a young Bharat to his paternal aunt in Ghaziabad, where he spent a part of his childhood. Eight-year-old Bharat was given the responsibility of bathing the four buffaloes that his aunt had.

Before becoming a swimmer, Bharat was an athlete. But, a foot injury in 2010 Commonwealth Games, forced him to pull out of athletics. However, he didn't lose hope and decided to become a swimmer. Practice and immense dedication finally made him a national level swimmer in 2011. He has won about 50 medals in swimming since then.

Practising in the Nehru stadium, Bharat could not afford the diet that an athlete needs. As a result, he used to sit down with beggars near a temple to have food.

He recalls, "I didn't have enough money for a good diet. So I had to sit with beggars near the Sai temple to have my food. That was my diet".

Speaking to iamin, Bharat says, "I started athletics with a lot of struggle and did reach a good way, but time has not always been with me. I am from a very poor family. Despite earning so many medals for our country, I still have to wash cars to earn a living".

"I don't have an arm and I don't need one. All I need is some support. I promise to bring medals in 2017 Asian Games provided I get the desired support. I have approached many celebrities for support but, all in vain. This time, I have written to Modiji for help and hope he does" he added.

Being a sportsperson, I understand that training, good diet and equipment provision would require money. For food, training, equipments, living, etc., the cost would turn out to be Rs 30,000 per month.

Please contribute generously and help him train and win for India.

For more details go to given news link
http://www.iamin.in/en/new-delhi/news/shame-gold-medalist-indian-swimmer-forced-wash-cars-85394