Boy Who Aspires To Be A Scientist Has 4 Days Left To For A Transplant | Milaap
This campaign has stopped and can no longer accept donations. 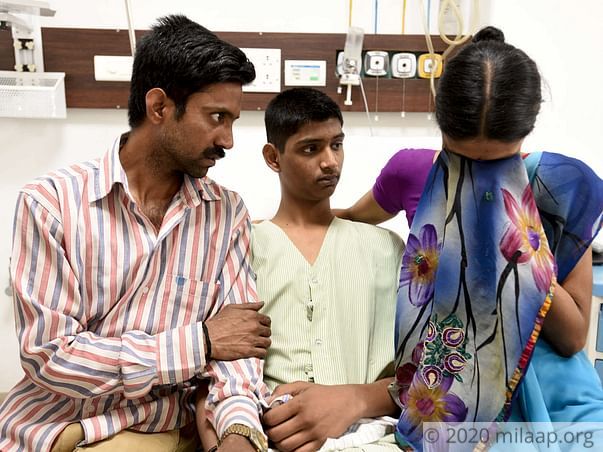 “My son, Yash was just a year away from entering his dream college, Indian Institutes of Science Education and Research (IISER). He wants to be a scientist and had already started his preparation. On May 5th, 2018, we happily came out of his school after his admission in the 12th grade. He was excited about how close he was towards achieving his dream. But after 5 days, when the doctor confirmed that my son’s liver is completely damaged and his life is at risk, I couldn't believe it. I was dreaming of seeing my son succeed, and now I have to worry if he will survive. I hope no parent ever has to see such a day in his life,” - Chandrabhan, 16-year-old Yash’s father.

About a year ago, Yash started sneezing every morning after a bath. No one suspected anything as it was just a sneeze. Gradually, he started bleeding profusely from his nose. He was given medicines and the bleeding stopped. But soon, he developed rashes on his face and entire body. His parents kept thinking that he has developed some allergy until his limbs and face started swelling. Chandrabhan and Kavita couldn’t figure out what the problem was.

After a few tests, Yash’s parents were told that he is suffering from Wilson's disease, a condition in which copper builds up in the body. For Yash, there has been copper build-up in his liver and that has led to complete liver damage. If he doesn’t get an urgent transplant in the next 4 days, it will be very difficult to save him. His maternal aunt is prepared to donate her liver, but the only thing standing in the way is money.

“We have to travel from Ahmednagar to Pune that is 140 km in a bus every 15-20 days. Whenever we take Yash to the hospital, his hands and legs swells up even more due to the hectic bus journey. We leave home at 5 in the morning to avoid crowd and traffic. It becomes so difficult for Yash, but he doesn’t complain. Instead, he tells me, ‘papa, bad days will be over soon. It’s just a matter of a few days.’ His strong-will gives me the strength to keep fighting. I can’t imagine losing him.”-  Chandrabhan

Yash has been suffering for the past 1 and a half years. Yash loved playing football and kabaddi but now he is bed-ridden. He can’t walk for more than 15 minutes. As he looks at his books, tears roll down his eyes. Yash gave so much importance to studying, he never imagined that there would be a day when he will not have the strength to keep his eyes open to read.

Yash's father, Chandrabhan works as a helper in a machine factory in Ahmednagar and his mother, Kavita works in a small factory. The parents earn a maximum of Rs 6000 a month together. Chandrabhan and Kavita have always ensured that their poverty doesn’t come in the way of their children’s future. They have already spent Rs 1 lakh and the monthly expenses come to Rs 10,000 every month for Yash’s treatment.

“I am forced to borrow every month from people. I borrow at the medicine shop, at the grocery shop and that is how I fulfill my family's needs now. Neck-deep in debt, I can’t find a way to arrange Rs 10 lakhs for his transplant. I have just 4 days left to save my son and without help, I will definitely lose him.

An old photograph of Yash

Yash is suffering from Wilson's disease which has damaged his liver completely. He needs an urgent liver transplant in the next 4 days. His aunt has come forward to donate her liver to save Yash. Yash dreams of becoming a scientist and we can help this bright student stay alive to achieve this dream.

Your support will help Yash get a new life 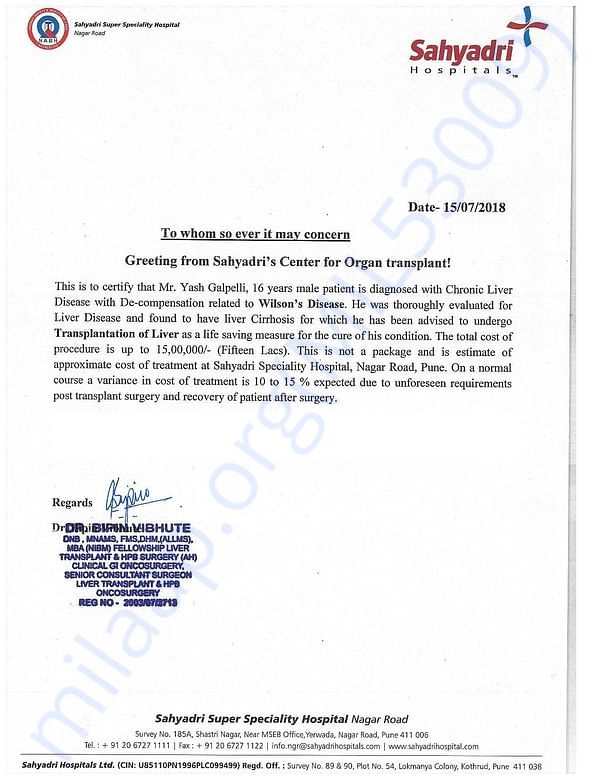 Thank you all for supporting Yash.

He underwent the liver transplant last month and is at home now. My aunt's daughter was the donor (Yash's Aunt).

He has stomach ache quite often and the doctors have given him injections for the same. He also has swelling in his hands and legs. When we take him for the next check up this week, the doctor will tell us what the future course of action will be.

Thank you all! We are very grateful for your love and support.

Wish you a speedy recovery and a Happy and Healthy Life ahead.

Lord Jesus is blessing you

My dear, get well soon! Prayers for you.

Wish you a speedy recovery and a Happy and Healthy Life ahead.

Lord Jesus is blessing you

My dear, get well soon! Prayers for you. 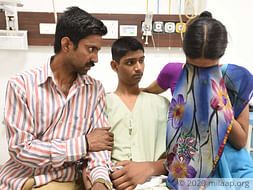