Despite Selling Land, Farmer Can't Save His Only Son's Life | Milaap

Despite Selling Land, Farmer Can't Save His Only Son's Life 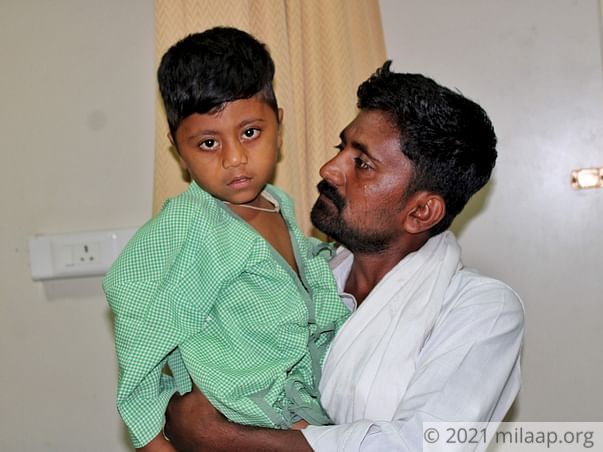 Vikas is a joyful, young boy whose warm smile can brighten up even the gloomiest of days. He’s all of 4-years, but he’s so sensitive and kind that he often leaves his parents pleasantly surprised by his gestures. “Every time he sees an elderly person, whether in our village or at the hospital, he invites them to have food with him or gives them his food,” Thimanna says proudly. Vikas has to go to the hospital every 15 days to get blood transfusions because of his disease, but he rarely complains. In fact, when he feels extremely weak and tired, he himself tells his parents to take him to the hospital. Little Vikas is mature beyond his years, and while his parents find hope in his strength, it’s not enough to save him from his disease. With less than one month left for his transplant, Thimanna and Nirmala are helpless.

His disease makes him extremely weak, it can damage his organs

Vikas has hemolytic anaemia, a disease in which the red blood cells are destroyed and removed from the bloodstream before it’s normal lifespan. Due to this disease, his bone marrow is incapable of creating new cells fast enough to meet the body’s needs. It can damage the vital organs because of oxygen starvation. Vikas has been living on blood transfusions ever since he was a 6-month-old baby, and although hospitals and needles are common occurrences for him, he’s still in a lot of pain.

“It takes us almost 4-5 hours to travel from our village to Bangalore for his tests and treatment, but we know it’s the only thing that can make him feel better. Without the blood, he’s so weak that he can barely get up from his bed.” – Thimanna, father

The past few months have been exceptionally difficult for Nirmala and Thimanna. Not only did they have to sell their only piece of land to try and continue their son’s treatment, but they also experienced the irreplaceable loss of their baby four months ago, the pain of which will stay with them for years to come.


“Our baby died of the same disease that our son has now. We lost the baby even before his birth. We are devastated. On some days I find Nirmala quietly crying to herself. She fears we’ll lose Vikas too, and I try to stay strong for her, I try to tell her that we’ll make it through this together. But now my faith is shaking.” – Thimanna

Vikas has less than one month to get a bone marrow transplant to fight the disease that is making him weaker by the day. His mother is a matched donor, but after years of treatment, a dire lack of funds stands in the way of his recovery. Thimanna, a small-time farmer, has already sold his land and now works on others’ farms and earns Rs. 250 per day. This is nowhere enough to afford the 19 lakhs required for his life-saving transplant. Your kind contribution will save Vikas from this dreadful disease. He can make it with your help.

Scan & donate with any app
check_circle_outline Download payment receipt
Report fundraiser
Know someone in need of funds for a medical emergency? Refer to us
Rs.102,792 raised

You will be in my prayers and you are going to be alright and play with other kids. You have been so brave. God will bless you!!

You will be in my prayers and you are going to be alright and play with other kids. You have been so brave. God will bless you!! 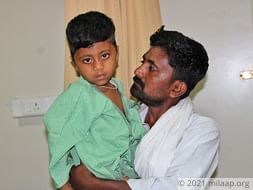 Despite Selling Land, Farmer Can't Save His Only Son's Life