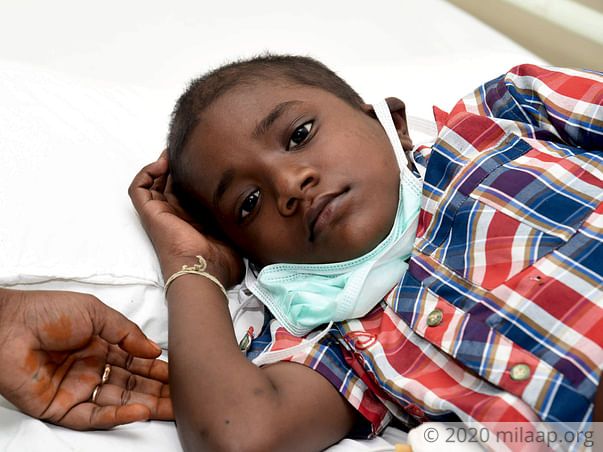 Every morning, Little Tharcin used to stand in front of the mirror for at least a dozen times before he left for school. He wanted to make sure that his hair was styled right like how his seniors in school do. But this was before cancer transformed him – now Tharcin dreads to look at himself; not only has he lost all his hair, but he has to wear a face mask at all times to be free from infections. To make matters worse, the children in his village taunt him when they pass by his house, saying, ‘What kind of disease do you have? Can't you come to play today also?’

“He gets angry that he has to wear the mask always, he feels different from the other kids. He attempts to even tear his mask, and we have to hold him down until he calms down. He is so weak now, and his anger makes him weaker. He does not want to be called ‘a sick child with a mask’. I can’t bear to see him live in sadness like this, but he can only be completely cured with a transplant that his father and I cannot afford.”-Petchiammal, mother of 7-year-old Tharcin.

This little boy is confined to life within his home and hospital, begs his parents to take him outside

It was a year ago that Thavam and Petchiammal’s vivacious younger child Tharcin was diagnosed with high-risk ALL – Acute Lymphoblastic Leukemia, a cancer of the blood in which there is overproduction of immature white blood cells, after he kept getting recurrent fevers. Life changed drastically for this child whose favorite activity was playing football outside with his elder brother Tharcith (10) as they didn't have much space inside their one-room house in Vattalagundu village in Dindigul.  Now he has to lie all by himself on a cot that does not even have a mattress.

His parents and brother sleep on the hard floor, so that Tharcin is comfortable. As Thavam cannot afford to buy enough vegetables and eggs for 4 people, he just buys enough for Tharcin, while his mother and brother make do with leftover rice and lentils. Tharcin's only contact with the outside world is when he has to go to the hospital in Madurai from his home for monthly chemotherapy sessions.


Tharcin lying down at home

“We struggled a lot to keep him indoors at first – he would cry and ask us why we are stopping him from being happy. He would say ‘I was a good boy, I did not cry when they gave me injections – why are you not letting me play outside?’. We would try to divert his mind by asking him to draw. He loves drawing; once he sketched Chota Bheem in hospital and the doctors were so amazed by his skills. But even drawing does not keep him happy for long. He looks out of the window and cries as my poor child’s heart lies in running and jumping outdoors.”-Petchiammal.

Petchiammal is forced to lie to Tharcin that he would be able to go to school soon, but the truth is he is not getting any better

Tharcin can only watch painfully as his brother gets ready to go to school every day. His school books are scattered in a corner along with his school bag, which has been untouched for many months now. Sometimes he asks about his friends and what they’re up to now. He misses them badly but does not want to meet them now as he fears they will make fun of his appearance like the kids in his village. He asks his mother when he will be able to go back to school healthy, and she replies ‘in a month’, but she knows that in reality, his cancer will kill him without a bone marrow transplant.

Thavam had to go back to work last month as he is neck-deep in debt, leaving Petchiammal to take care of everything alone

Tharcin’s father, Thavam, a poor driver had to quit working for his initial treatment and had been jobless for almost a year before he went back to work last month. Now, he is mostly away at his workplace in Tirunelveli and can only come home once in a week. Petchiammal has to take care of Tharcin all by herself now. The couple had been borrowing money from neighbors and local moneylenders at high interest rates to fund 8 rounds of chemotherapy till now, and have not even paid one installment back. When the lenders started coming home, hurling abuses at Thavam, he decided to go back to work despite his son’s condition being so critical.


Tharcin with parents outside their one-room house in the village

“My own sisters and brothers started asking me why I am spending more than I can afford on my son’s treatment. They told me to leave everything to fate as poor people do not have the luxury of saving anybody. But how can I do that? This is my son, my blood. If I don’t strive for him, who else will? I am fighting a losing battle now all by myself. My son misses me terribly, but I have to work to pay off some debts. I don't know how I will arrange funds for his transplant.”-Thavam, father.

7-year-old Tharcin is suffering from an aggressive type of cancer for almost a year now. This is making him confused.  He cannot even venture out of his house for some fresh air due to the high risk of infections. Only a bone marrow transplant can save his life but his poor parents cannot afford it.

UPI: givetothavam@yesbankltd (Copy to clipboard)
Or
Click here to read the instructions before you make a bank transfer. 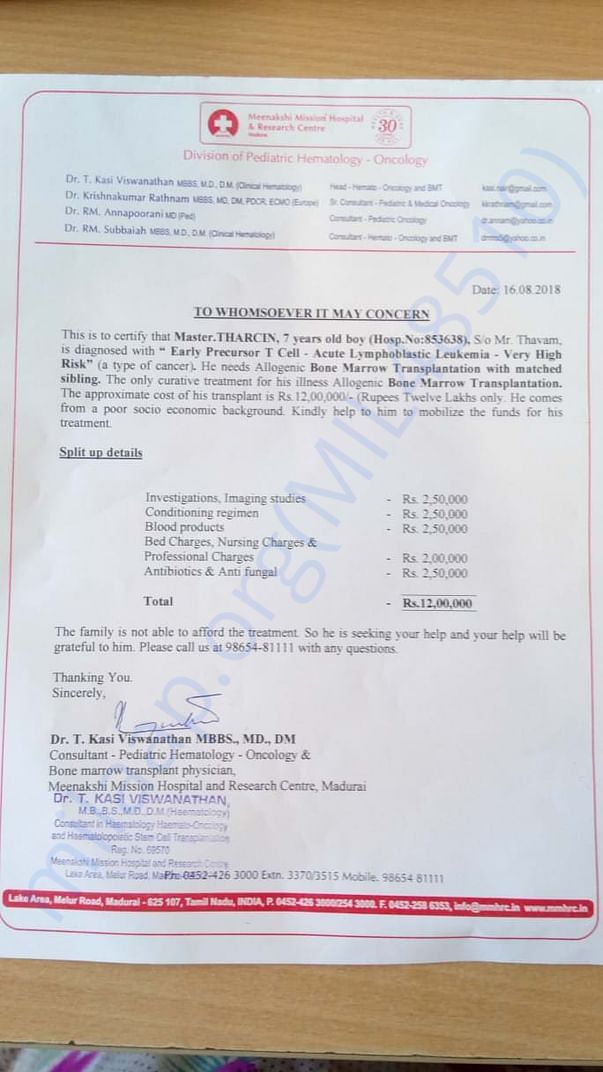 UPI: givetothavam@yesbankltd (Copy to clipboard)
Or
Click here to read the instructions before you make a bank transfer.

Tharcin is doing well. He is recovering and is visiting hospital for his regular check ups.

Thank for all the love and support.

Tharcin has started his first cycle of chemotherapy now. He was vomiting so we will be taking him for a check up this week to find out if it is normal. When we meet the doctor, they will let us know what the future course of action will be.

Thank you all for supporting us during these tough times.

Report fundraiser
See how thousands are crowdfunding for their causes on Milaap
Rs.187,320 raised

Donated to this campaign via Paytm? Click here if you can’t find your donation listed below.
MI
Mithun donated $100
SM
Sunitha donated Rs.2,500

Get well soon. May God Bless you always...

We wish and Pray god for speedy recovery

Donated to this campaign via Paytm? Click here if you can’t find your donation listed below.
MI
Mithun donated $100
SM
Sunitha donated Rs.2,500

Get well soon. May God Bless you always...

We wish and Pray god for speedy recovery 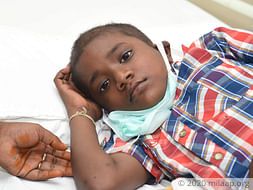