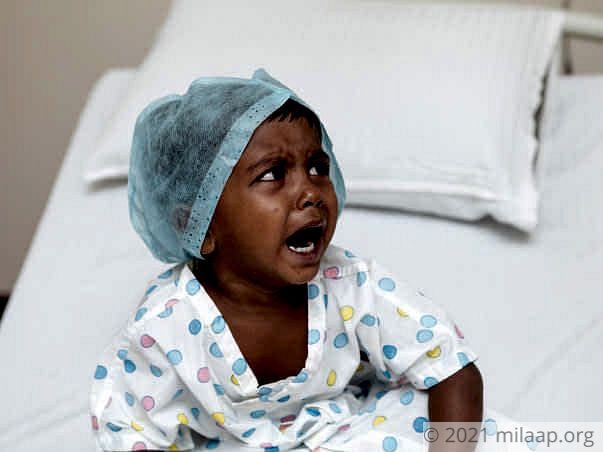 “Every month, Swarupa has to stay in the hospital for 3 days and sometimes, a week. Blood transfusion at regular intervals is keeping her life afloat. She’s just learning to speak, she can barely utter a few words. But, in no time, every word turns into cries of pain. For 2 years, the little girl’s life has only known fatigue and a faint smile, that doesn’t last long.” Raju, Swarupa’s father

Raju and Lakshmi Bai were elated beyond bounds when Swarupa was born. But the happiness descended into despair in a matter of three months. When the little girl complained of fever and extreme fatigue, the family wasted no time in consulting a doctor. Following tests, it came to light that Swarupa was suffering from Beta Thalassemia Major-a life-threatening blood disorder, for which, the only cure is a Bone Marrow Transplant (BMT).

“The very sight of a needle scares Swarupa. She cries inconsolably and yearns for her mother’s embrace. The after-effects of blood transfusion send her into alternating periods of painful silence and anguish. For two years now, Jaswanth-Swarupa’s 5-year-old brother-has only one question: Why does my little sister go to the hospital so often? Why does she cry so much? Why are they taking my blood? Will that stop her crying? Unfortunately, we have no answers,” says Lakshmi Bai, as she embraces Swarupa.

Living in a remote village in Kurnool and working for daily wages at a local farm, the couple managed to earn Rs 500/day. Though poverty and routine struggles posed challenges every day, they found hope in working relentlessly for their children’s future. Owing to Swarupa’s fatal condition and Jaswanth’s worrying health, Lakshmi Bai can’t work anymore. Now, their only wish is to ensure they can earn and receive help to keep their daughter alive.

BMT presents hope, but a hope they can’t afford

While blood transfusions have helped Swarupa keep death at bay, they will cease to suffice anymore. Only a BMT can help but. With great difficulty, they found matching donor. Swarupa's father feels that it is wrong to even dream of a treatment when they are living on Rs. 200/day and are already knee deep in Rs. 2 Lakhs worth loans.

To make matters worse, Swarupa's brother also has the same condition. These parents who are unable to even pay for transfusions, medicines or travel to hospital, will be forced to choose between their children. Swarupa can use any help she can get. She is after all just 2 years old, with a long life ahead of her. 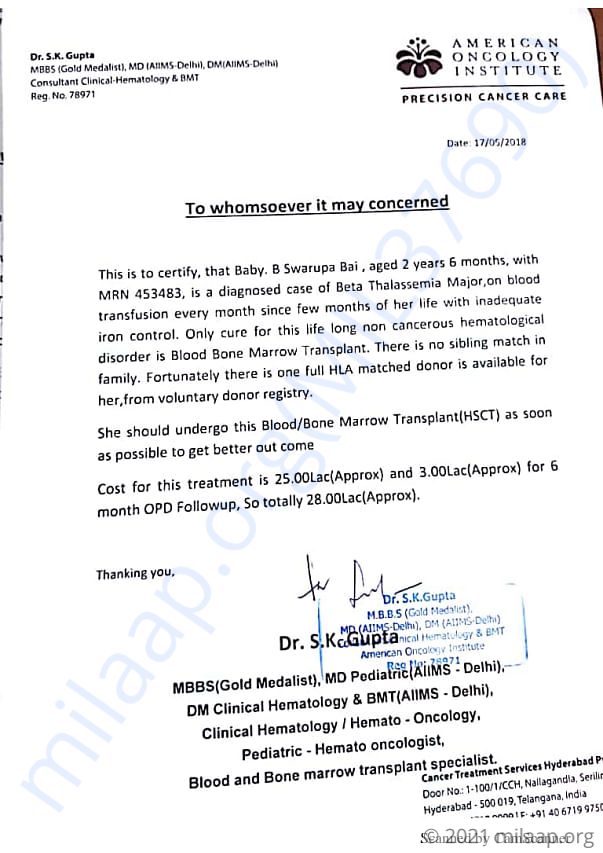 Scan & donate with any app
check_circle_outline Download payment receipt
Report fundraiser
Know someone in need of funds for a medical emergency? Refer to us
Rs.6,300 raised

Donated to this campaign via Bank transfer/QR Code? Click here if you can’t find your donation listed below.
Pv
Padmavathi donated Rs.2,000

You will have a good and healthy life ahead.

Donated to this campaign via Bank transfer/QR Code? Click here if you can’t find your donation listed below.
Pv
Padmavathi donated Rs.2,000

You will have a good and healthy life ahead. 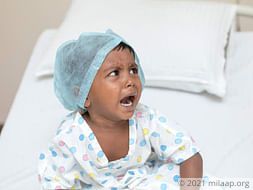