This Diwali, adopt a Solar Street Light | Milaap
Milaap will not charge any fee on your donation to this campaign. 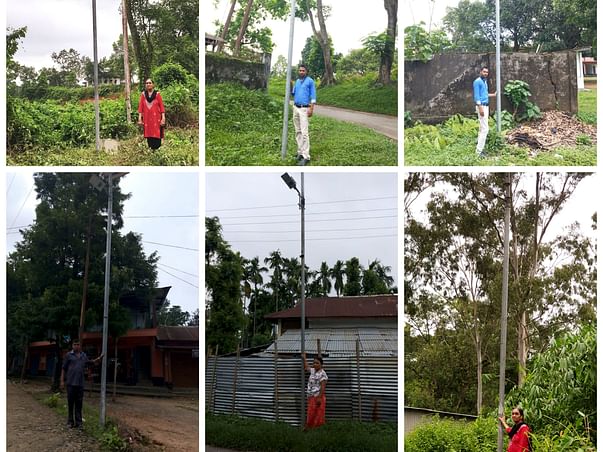 When I came to Williamnagar for the first time, I was elated to see that there were already so many solar street lights spanning across the entire town area. But that joy was only ephemeral as I got the reality check pretty soon. Most of the batteries from the poles of these solar street lights were stolen, in some cases they had also stolen the solar panel and in some case, the light was broken or shattered to pieces. So mostly all of the 200 lights were dysfunctional because of these reasons. Always a disheartening sight to see public property being ripped apart by the public themselves.

Solar Street light are great asset for any locality. They are not very expensive, are now easily available and the installation is also very simplistic. Of course the greatest advantage being that there is no recurring cost as of a electricity bill or the question that who will bear that cost. The earlier models came with these big separate batteries which required maintenance and which were placed in a separate box on the pole which was prone to theft. The distilled water in these batteries needed to be replaced at least once a year to ensure proper functioning. But with the advancement in technology, now these Sleek lights are available with inbuilt lithium battery and all you need to do is connect it to a solar panel on the pole. The possibility of theft also comes down as their is no stand alone battery which could fetch some money in the open market.

So now the question came, how can we revive these lights? In all the cases, the pole was intact, the panels were there in 99% cases, the light was there in 80% cases but the battery was gone in almost all cases. So we decided to go with these new lights with inbuilt battery. We started something called Project Light(For details CLICK HERE), wherein we appealed the locals to come together and to adopt a street light. With the help of few generous people who are resourceful, we repaired about 30 lights to start with and due awareness was spread to all localities. Slowly more people joined in and the tally crossed 50 recently.

We also requested all the govt offices to join this campaign. If they could adopt the solar street lights in front of their respective offices, it would also benefit the people moving across that road. The Forest department was the first to respond to our call followed by the Williamnagar Civil Hospital. Several other individuals also came forward and adopted one light each. I am also grateful to my mother who adopted two lights and paid for their repair from her pension.


This ongoing campaign of Project Light has at least been able to brighten up some crucial locations in the town in terms of safety of people. Moreover, the campaign has also helped to inculcate a sense of ownership in the community with regards to public property. It has been also instrumental to promote the use of renewable energy sources like Solar Energy. Hoping to light up some more areas with the generosity of the masses.

On this auspicious festival of light, please come forward and adopt a Solar Street Light and help us to brighten up this dark little town. Repairing one such light costs about 10,000 INR.  But of course even donation of one rupees would take the project towards completion.  Whatever be the amount you wish to donate, it would surely mean a lot to us. We are looking to repair as many as we can. Best wishes to you for Diwali.

More than 30 solar street lights have been repaired and renovated using various funds including Milaap.

Please find below some pictures as well as the quotation for the costs funded using crowdfunding donations.

Scan & donate with any app
check_circle_outline Download payment receipt
Report fundraiser
See how thousands are crowdfunding for their causes on Milaap
Rs.25,000 raised

Donated to this campaign via Bank transfer/QR Code? Click here if you can’t find your donation listed below.
R
RATANLALMOHINIDEVISINGHANIACHA donated Rs.25,000

Donated to this campaign via Bank transfer/QR Code? Click here if you can’t find your donation listed below.
R
RATANLALMOHINIDEVISINGHANIACHA donated Rs.25,000

You are sending a message to
Swapnil Tembe
Go back 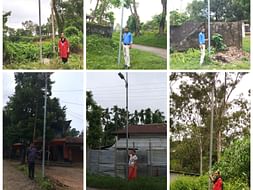