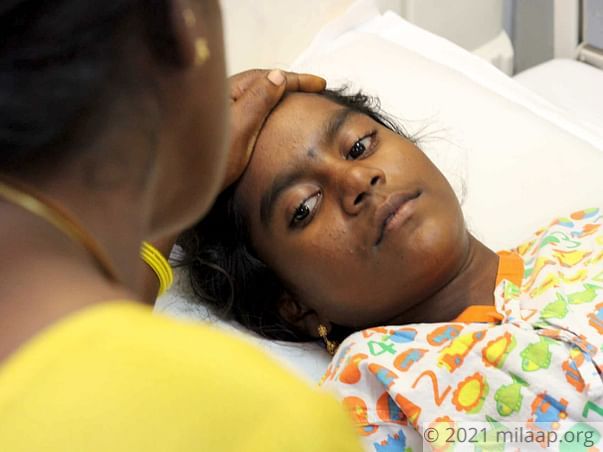 Every night, Suwetha clutches a photo of her father and cries herself to sleep. Sometimes, she becomes breathless all of a sudden and chokes on her tears. Her mother Chithra, tries telling her, “Everything will be fine, please stop crying or you will get sicker” but nothing can stop Suwetha’s incessant sobs.  She keeps saying the same thing to her mother: “I don’t think I will be alive when Appa comes home next”

Suwetha’s father Chandran works as a labourer abroad, and gets to visit his family in India only once every two years. Since his last visit a couple of months ago, Suwetha’s heart condition has worsened to the extent that she will not survive for more than a few days without an urgent open heart surgery.

Chithra still remembers how chubby and healthy Suwetha looked when she was born. But her happiness soon gives way to sadness when she recalls how weak Suwetha became over the years, and how nothing she did could help her. “She grew up to become a very frail girl. I tried feeding her nutritious food to the best of my ability, but nothing worked.” Chithra had taken her to many local doctors in their hometown of Madurai who couldn't understand her problem. However, one day Suwetha was diagnosed with a severe congenital heart disease at a free medical camp conducted in her school three years back. She had been surviving on medicines since then, but from a few months, her condition has worsened to the extent that she will not survive without an open heart surgery.

“We felt very guilty because we couldn’t go for many scans during my pregnancy due to lack of money. We didn’t know that we would have to pay such a heavy price for it one day. But we were relieved when we were told that a heart surgery would solve all her health issues - but we haven't been able to arrange even half the money till date.”-Chithra, tearfully.

She misses school, even though she was bullied daily

Suwetha was always teased and bullied by her peers for being ‘different’ – her hands and legs would shake abnormally and she would keep panting for minutes after a walk. When she would struggle to carry her heavy schoolbag, her classmates would mock her rather than help her. Suwetha never had many friends to rely on either as she was never able to have any hobby due to her persistent weakness. But that never stopped her from going to school all these years. But of late, she has stopped going since her heart disease has gotten the best of her – she experiences breathlessness very frequently now and cannot even eat a morsel of food. Fainting episodes have also become a common occurrence.

“She keeps asking her siblings about school and misses being there despite the bad experiences she had to endure. She hates being confined to the four walls of home, but what else can she do in this situation?”-Chithra.

All Suwetha can do is cry on the phone with her father, asking him to save her

Suwetha waits with bated breath for her father’s call every weekend. She longs to hear his voice, as she was always closer to him than her mother. When he calls, she erupts into tears at the first ‘Hello’ itself. She asks him only one thing ‘Appa, will you come be with me before I die?’ Chandran consoles her to the best of his ability before his own tears choke him.

Chandran earns only Rs 10,000 a month and sends more than half of it to his wife and kids back home in India. He works for more than 12 hours a day in difficult conditions only for the sake of his daughter, but that is not enough to save her: he needs 4 lakhs for her surgery, but does not have more than a few thousand rupees with him now. His painful calls with his wife and daughter remind him that time is running out, but there is very little he can do.  He cannot even breach the conditions of his contract to come be with his ailing daughter.

Suwetha has good chances of beating her heart condition once and for all with a surgery.  She may finally be able to do the things she was unable to do as a result of her condition – she may finally have a hobby and even make friends, and all in all have a ‘normal’ life – but only with your help.

Your donation will also be a blessing for her poor parents who have no means to save her. 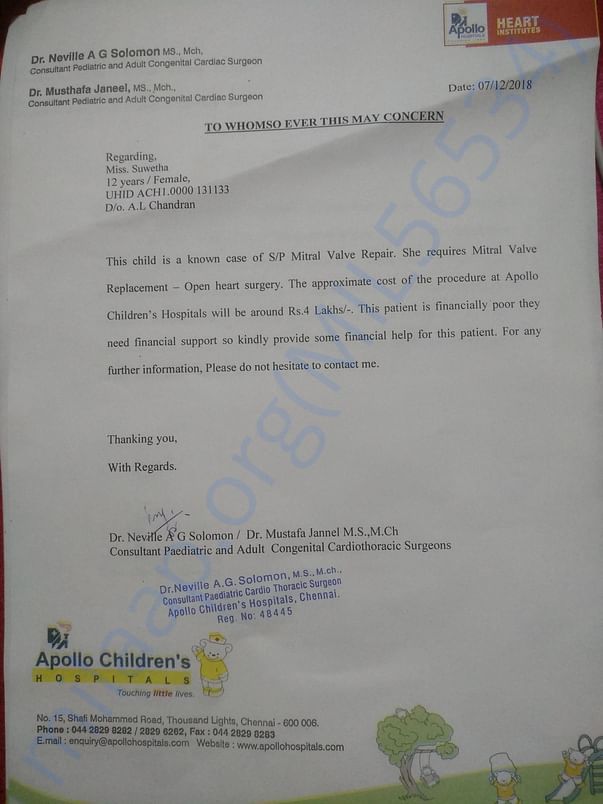 Scan & donate with any app
check_circle_outline Download payment receipt
Report fundraiser
Know someone in need of funds for a medical emergency? Refer to us
Rs.3,963 raised 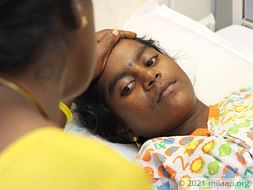