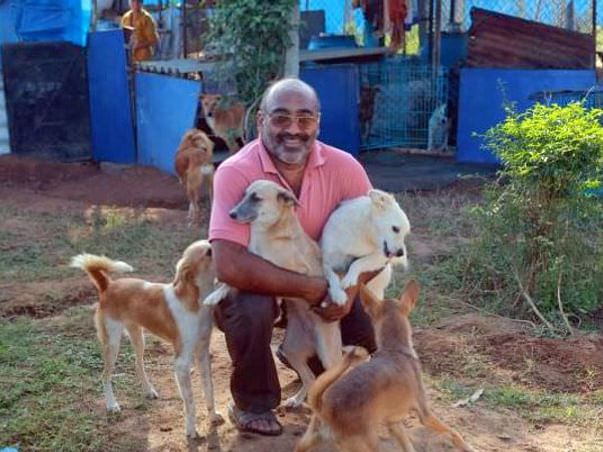 Save Animals India (SAI) is a small no-kill shelter in Bengaluru, operational since 2016. It is run by Surya and Anju Singh, a dedicated elderly couple who care for 300+ dogs all by themselves. The shelter is home to indies, rabbits, and cats – many of whom have been abandoned or are injured, sick, or disabled. After having relocated the shelter multiple times over the years, all dogs included, they now wish to build a permanent home for their four-legged (and some three legged friends).


“I am actively involved in rescuing and saving injured animals like dogs, cats, cows, calves, camels etc. that have met with road accidents or are being taken to slaughter houses through illegal ways. My wife and I also feed hundreds of dogs and cats on a daily basis by cooking food at the shelter or collecting leftovers from restaurants. I have been burying dead dogs who have met with accidents on roads to prevent air-borne diseases spreading through the carcasses.

I was very disturbed and unhappy looking at the conditions of the shelters I used to work with. They were overflowing and had no space for injured or sick dogs. That’s when I decided to start my own shelter for these innocent speechless creatures by providing them proper food, medical facilities under hygienic conditions, a healthy environment, as well as love and affection. Our life is completely dedicated to these innocent creatures. Within a span of 2 years, SAI shelter was home to 85 sick, injured, paralyzed, handicapped, stray and abandoned animals, for whom we provided food, medicines, and other basic needs,” says Surya Singh.


SAI had previously organized a fundraiser to setup a new shelter, for which they received an overwhelming response. Having raised more funds than their intended goal, Surya Singh also donated to other NGOs. However today, they have exhausted most of their funds and need financial support immediately. He is now dipping into his personal savings to keep the shelter running.


THE NEED FOR A PERMANENT SHELTER

Since 2016, the shelter has relocated 4 times and has spent sizeable funds on building new structures from scratch. On a rented land, this is a very expensive and unsustainable exercise as new structures will have to be built every time. In addition, rented land has limited liberty in terms of what can be constructed. Purchased land will allow SAI to build permanent structures such as enclosures, medical facilities, offices, etc. on its own terms. In the long run, this will allow SAI to save more animals with increased capacity, minimized costs, and an expanded team – all leading to a larger positive impact.

Another major reason for the move is the current landlord. Although the rental contract was drawn for 3 years, the landlord had verbally assured SAI that they could use the land for 15-20 years more, citing that he was an animal lover and supported their noble cause.

But he soon turned abusive. The landlord objected to them placing CCTV cameras inside the shelter. He even went to the extent of removing them forcibly and threatening Surya Singh. However, relocating at that stage was not possible as they had already spent around INR 12 lacs on the shelter's construction.

On many counts, the landlord was found to have abused and even killed the animals around the shelter. But due to the lack of proof, SAI was helpless. However, the landlord was recently caught on CCTV killing puppies near the shelter and SAI has filed an NCR (Non Cognizable Report) against him. This has led to further tensions and has made the need to move all the more urgent. The current contract expires in May so the shelter will need to secure the land by February at the latest and start construction immediately.

The project has been divided into 3 phases, which have been arranged in order of urgency.

Phase 1: Purchasing land
The required land is about 1.5 acres in the outskirts of Bengaluru (localities such as Nelamangala or Kanakapura), which will cost about INR 16-18 lacs per acre. Phase 1 will require about INR 30 lacs to make the purchase immediately, before land prices increase and availability becomes scarce.

Phase 2: Construction
Upon purchase, the land will be divided into multiple sections. This construction will have to be completed by May 2020 at the latest as the current rental agreement expires then. The permanent shelter will include spacious enclosures for the animals, a resident clinic with necessary medical facilities (for routine and emergency purposes), special enclosures for special needs animals, a modest office and quarters for the team/employees, as well as a small farming setup for future income generation. Phase 2 is estimated to cost around INR 20 lacs.

Phase 3: Operations cost
An additional INR 20 lacs per annum can dramatically improve the conditions at the shelter and allow SAI to accommodate more animals and provide better care.


YOUR SUPPORT CAN SAVE THE SHELTER
With your donations, Surya and Anju Singh can gift these voiceless angels a permanent home and ensure that they receive the best love, care, and medical attention. Please dig deep into your hearts (and pockets) to donate for this noble cause.